Coinbase is by far the biggest exchange hoarder of Bitcoin, with second place Binance having holdings totaling only around 250,000 coins.

United States cryptocurrency exchange Coinbase will soon hold a million Bitcoins (BTC) in its cold wallets in a controversial first for the industry.

According to data from news and information resource Longhash released on Jan. 23, Coinbase’s cold wallets contained around 970,000 BTC ($8 billion) as of Jan. 1.

Coinbase weeks away from 1 million BTC

If current growth continues, the company will reach the 1,000,000 BTC mark by February. 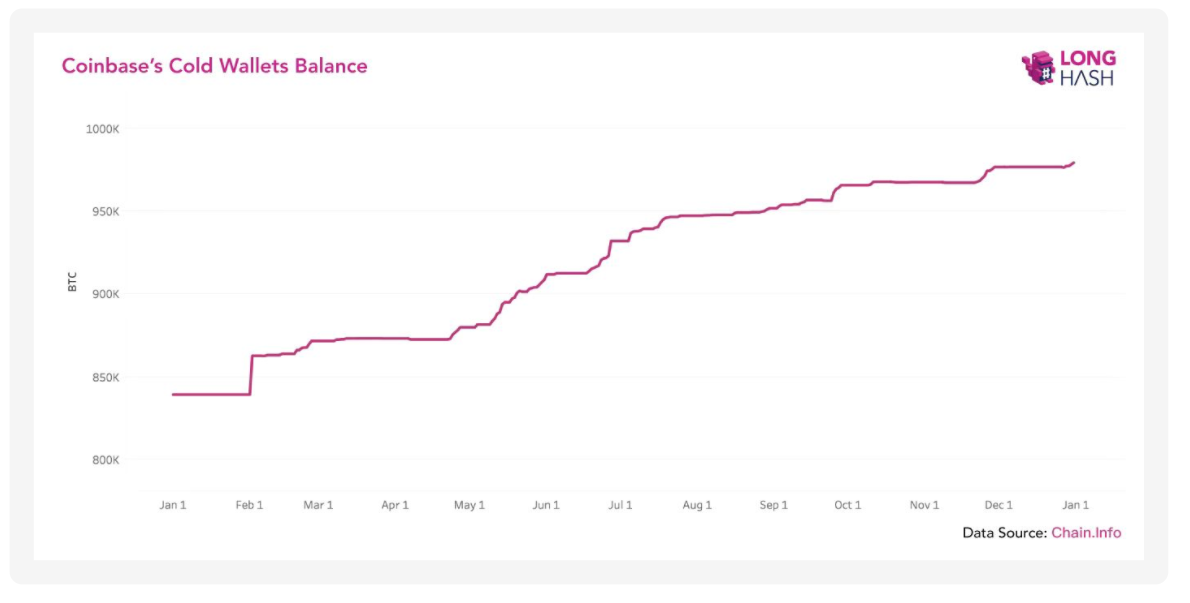 The trend underscores growing tendencies to interact with Bitcoin via exchanges, with the Coinbase figures including both private and institutional investors.

Now, despite the myriad exchange hacks and other dangers of trusting third parties with their cryptocurrency wealth, it appears that consumers in general still prefer not to control their coins themselves.

“More individuals and institutions need to learn how to self custody,” Tales from the Crypt Podcast host Marty Bent summarized in an analysis of the Coinbase figures on Thursday.

With 30 million users registered since launch, Longhash notes that Coinbase is by far the exchange with the largest Bitcoin holdings, but the majority of major trading platforms are seeing their balances increase.

Cryptocurrency proponents have long been irked by the phenomenon, which flies in the face of Bitcoin as sovereign money — trusting someone else with one’s wealth is the equivalent of endorsing central banking.

A dedicated effort to inspire Bitcoin holders to remove their coins from exchanges and place them in wallets to which they control the private keys is now in its second year.

Despite the publicity effort behind Proof of Keys, however, analysis of exchange wallets, which form several of the richest Bitcoin addresses in the world, shows that the most recent event on Jan. 3 did not spark mass withdrawals.

“Coinbase’s apparent dominance and steady growth may be because it attracts a large share of long-term/institutional investors, who are less concerned with short term price swings,” Longhash added in a suggestion that institutions trust exchanges with custody.