David Puell, an on-chain analyst, laid out several key data points on Aug. 16 based on the past 4-year cycle of Bitcoin (BTC). Data show that the $14,000 level is a crucial price point for Bitcoin due to whale clusters.

According to Puell, whale clusters show many large buyers bought in the $9,000 to $12,000 range. Whales that bought at $9,000 are seeing relatively high profits, and those that bought the top are at a breakeven point.

The clusters could result in a volatile price action where buyers and sellers aggressively try to break out from the $12,000 to $14,000 price range.Â 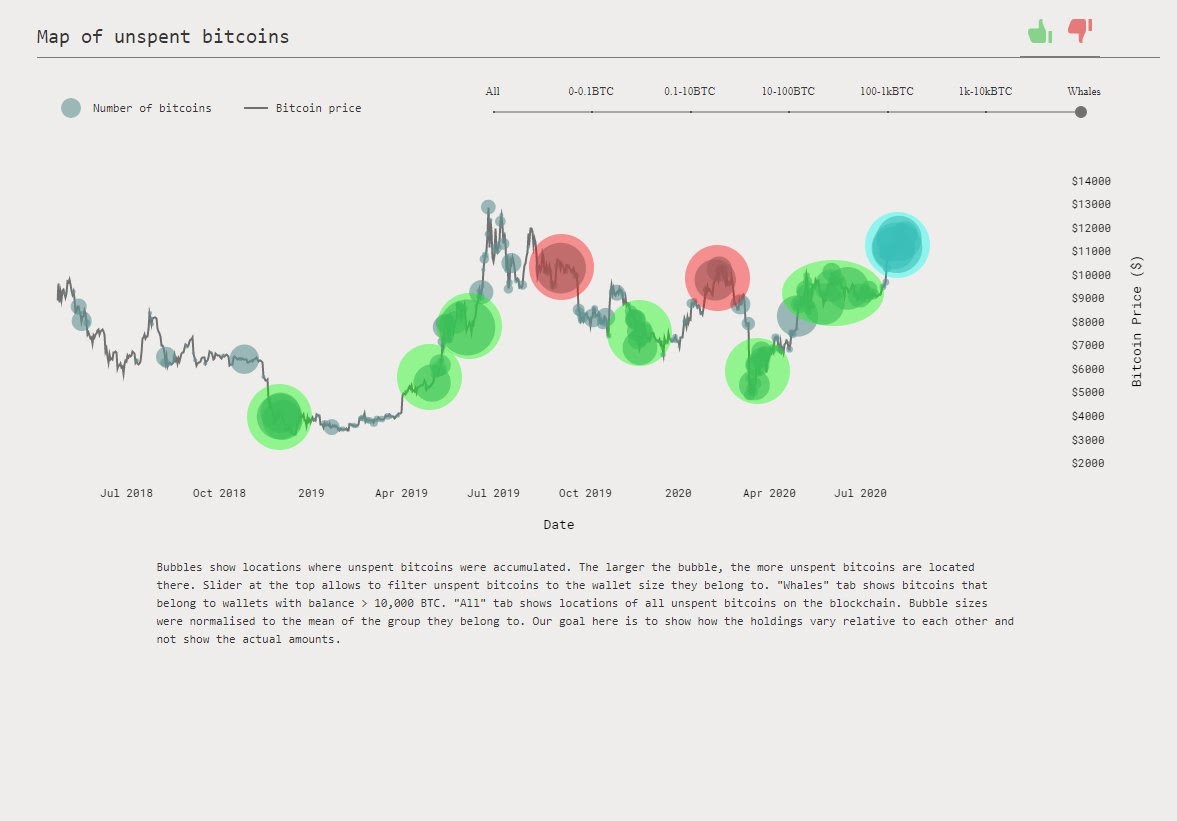 So is a correction more likely or continuation of the Bitcoin rally?

The data support arguments for both a pullback and a continuation. If whales bought at $9,000 and $12,000, they have a compelling reason to take profit in the $12,000 to $14,000 range. They have seen some profits and/or are at breakeven after months of stagnation.

On the flip side, if the whales are in profit and are at breakeven, they might want to see the rally continue. Puell said that he expects an accumulation phase to occur in the $10,000 region following BTCâ€™s move to $12,000 or $14,000. He said:

â€œFinally, unspent whale clusters confirm a great battle taking place. Two actors at play: top buyers at 12k-14k reaching their breakeven price, and current buyers active after the first higher high in over a year. If we get a correction, it will most likely result in another major cluster of re-accumulation at the 10k area (as expected from the volume profile before); if we breakout, well… enjoy the ride.â€�

The current landscape of the Bitcoin market is unique when compared with previous cycles. Puell said that due to macro factors, including the pandemic, Bitcoin saw unprecedented price movements.

For instance, on March 13, the price of Bitcoin dropped to as low as $3,596 on BitMEX in a 50% drop overnight. The unusual price movements Bitcoin saw throughout 2020 as a result of unexpected external variables increase the chances of an uncommon price cycle. Puell explained:

â€œLooking only a year and a half back, we had some of the most interesting market structures in any Bitcoin cycle. During several attempts at a â€˜typicalâ€™ bullish trend with a strong halving narrative, two swans hit price discovery one after the other: PlusToken and COVID-19.â€�

Some variables to consider

In the short to medium-term, there are several variables that could have an impact on the price trend of Bitcoin.Â

In recent months, Bitcoin saw some correlation with gold, possibly due to the uncertainty in global markets causing investors to consider alternative stores of value. The low-interest rate policies by central banks across the world and the rapidly growing money supply will likely have a positive effect on Bitcoin price as well, many analysts believe.