Bitcoin is struggling to punch through stubborn resistance at $9,300, and a Russian court has effectively ruled BTC theft is not a crime.

Bored with Bitcoin? This price level is key for a big breakout

It has been a sleepy week in the crypto markets â€” and thereâ€™s barely been any movement in Bitcoin. At the time of writing, BTC is down 0.75% compared with where it was seven days ago. Traders were braced for a big drop this week after Bitcoin dipped below $9,000 for the seventh time in two months. Cointelegraph analyst MichaÃ«l van de Poppe says BTC is consolidating below $9,300, but this isnâ€™t necessarily bearish as a major breakout may be in the works. Heâ€™s warned support must hold at $8,900â€“$9,000 to prevent a further drop into bearish territory â€” and a key resistance level at $9,300 must be broken. All eyes are on the equities markets amid fears that a nasty downturn here could drag BTC down with it. The coronavirus crisis is going from bad to worse in the U.S., with a key member of the White Houseâ€™s COVID-19 taskforce warning the country could see 100,000 cases per day unless immediate precautions are taken to stop it from spreading.

Some fear PayPal is out to steal the lunch money of crypto exchanges with rumored plans to add Bitcoin to its platform. But not everyone subscribes to this theory. OKCoin chief operating officer Jason Lau believes any PayPal foray into digital assets would be â€œsure to have a positive impact in highlighting cryptocurrencies to a big new audience,â€� telling Cointelegraph: â€œPayPal adding crypto would bring additional awareness, adoption and a new low friction payment method for individual users.â€� Lau explained that many crypto users often get involved through mainstream, user-friendly and simple avenues at first. The OKCoin executive added: â€œTypically, our users first get initiated to crypto via an app like Square Cash, Robinhood or now potentially Venmo, and then come to OKCoin to develop and execute their investing and trading plans.â€� 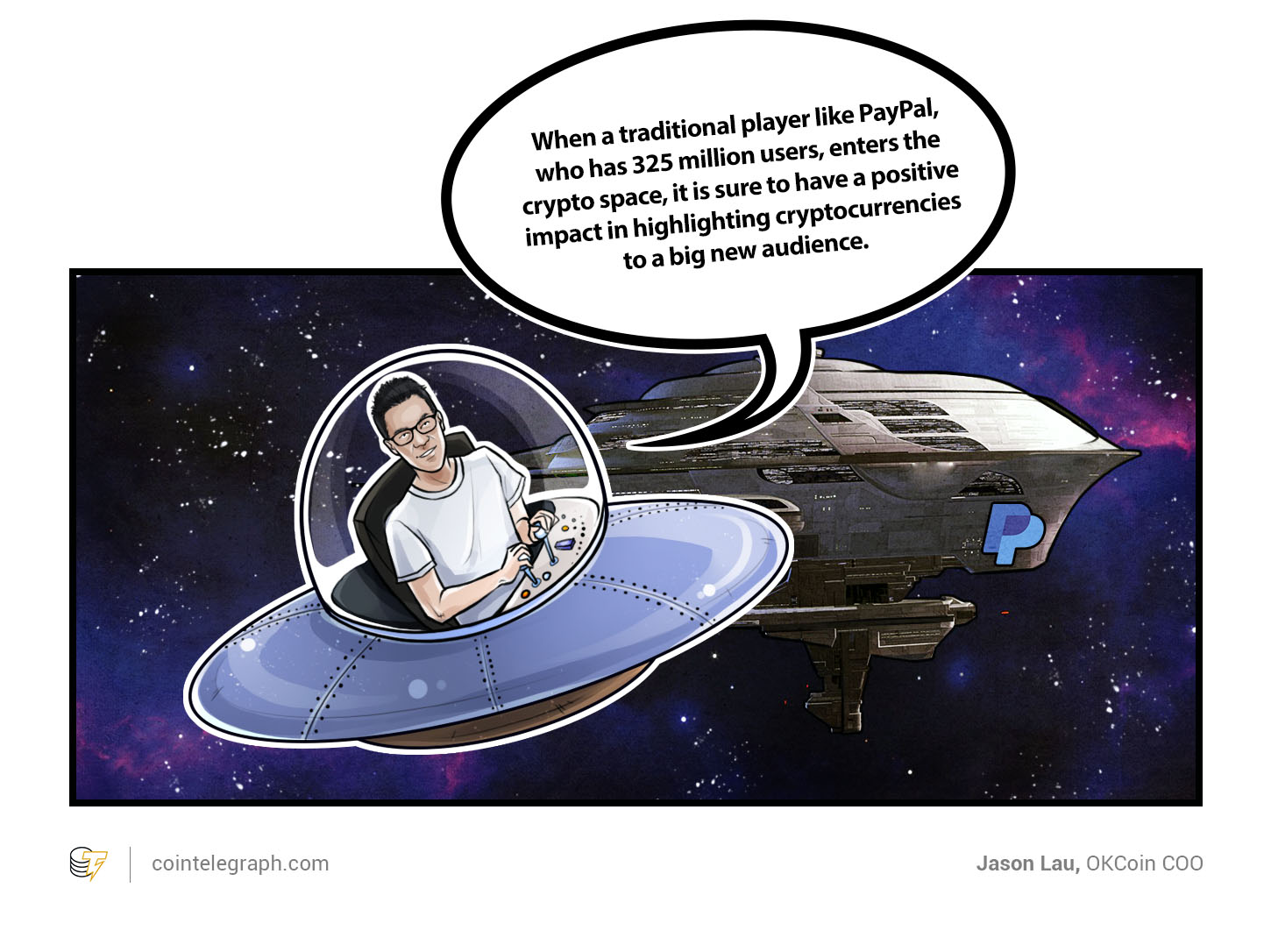 Police forces across Europe have â€œsuccessfully penetratedâ€� an encrypted chat network that suspected top-tier criminals used to ferry drugs and import guns. Almost 800 people, including two law enforcement officers, were arrested as part of a dramatic three-month operation. The network is called EncroChat, and the company behind it sold modified Android phones that offered a guarantee of anonymity. The question now is whether this bust is part of a coordinated campaign to discredit privacy-preserving technologies in the eyes of the general public. In recent weeks, a bill was introduced to the U.S. Senate that would ban end-to-end encryption.

The United Kingdomâ€™s Financial Conduct Authority has estimated that roughly 2.6 million British consumers have bought cryptocurrency â€œat some point.â€� Approximately 1.9 million â€” 3.86% of the adult population â€” currently own digital assets. The FCA says this is a â€œstatistically significant increaseâ€� from its report in 2019. Awareness of the industry also appears to be on the riseâ€¦ 73% of adults have heard of cryptocurrencies, compared with 42% last year. The FCAâ€™s research suggests that 75% of British crypto holders have digital assets worth less than Â£1,000 ($1,229) â€” and 83% buy their crypto from exchanges that arenâ€™t based in the U.K.

Report: $300 billion worth of food will be traced using blockchain and IoT by 2027

A new report by Cointelegraph Consulting and VeChain forecasts that food items worth $300 billion will be tracked using blockchain technology every year by 2027. As well as solving some of the industryâ€™s most pressing challenges, the research suggests that businesses could also save $100 billion annually. Itâ€™s estimated that as much as 20% of global wine sales are counterfeit â€” and up to 70% of wild salmon and Atlantic cod are â€œdisguised by species that are less desirable, cheaper or more readily available.â€� Global industry leaders such as Walmart, Carrefour and Dole are among those who are already using blockchain to track items along the supply chain. 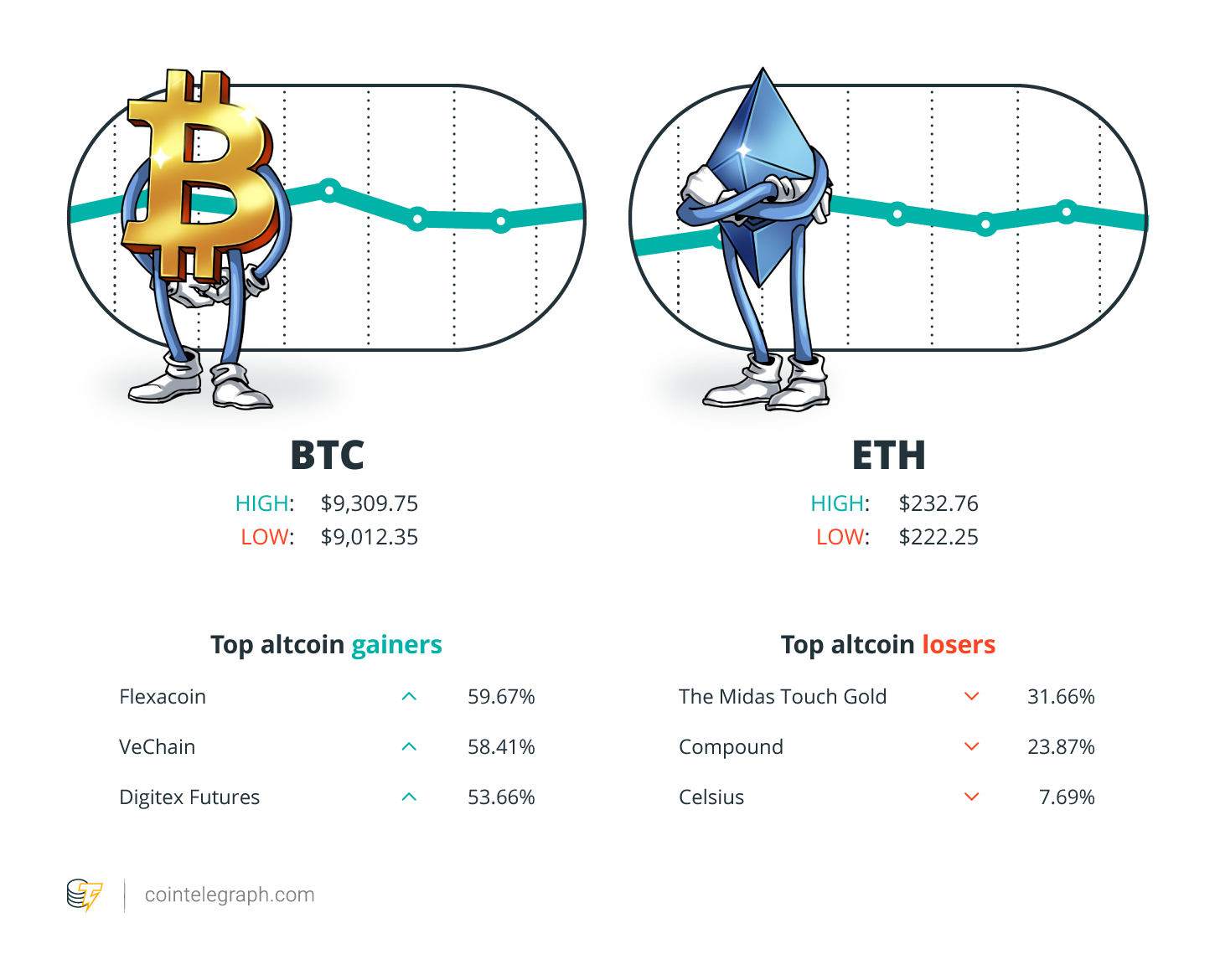 For more info on crypto prices, make sure to read Cointelegraphâ€™s market analysis.

â€œWe expected Millennials to continue buying into cryptocurrencies, but to see more experienced investors also become increasingly interested in Bitcoin, is extremely promising for the growth of the industry.â€�

â€œBoomers and Gen Xâ€™rs will move to own massive amounts of #Bitcoin and control exponentially more of the asset than millennials when it should be the other way around.â€�

â€œThe transition to Eth2 is incredibly important for the crypto ecosystem because it allows one of the most important and most adopted blockchainsâ€”with millions of users and tens of thousands of dAppsâ€”to introduce new scalability options for the protocol and thatâ€™s a big deal.â€� 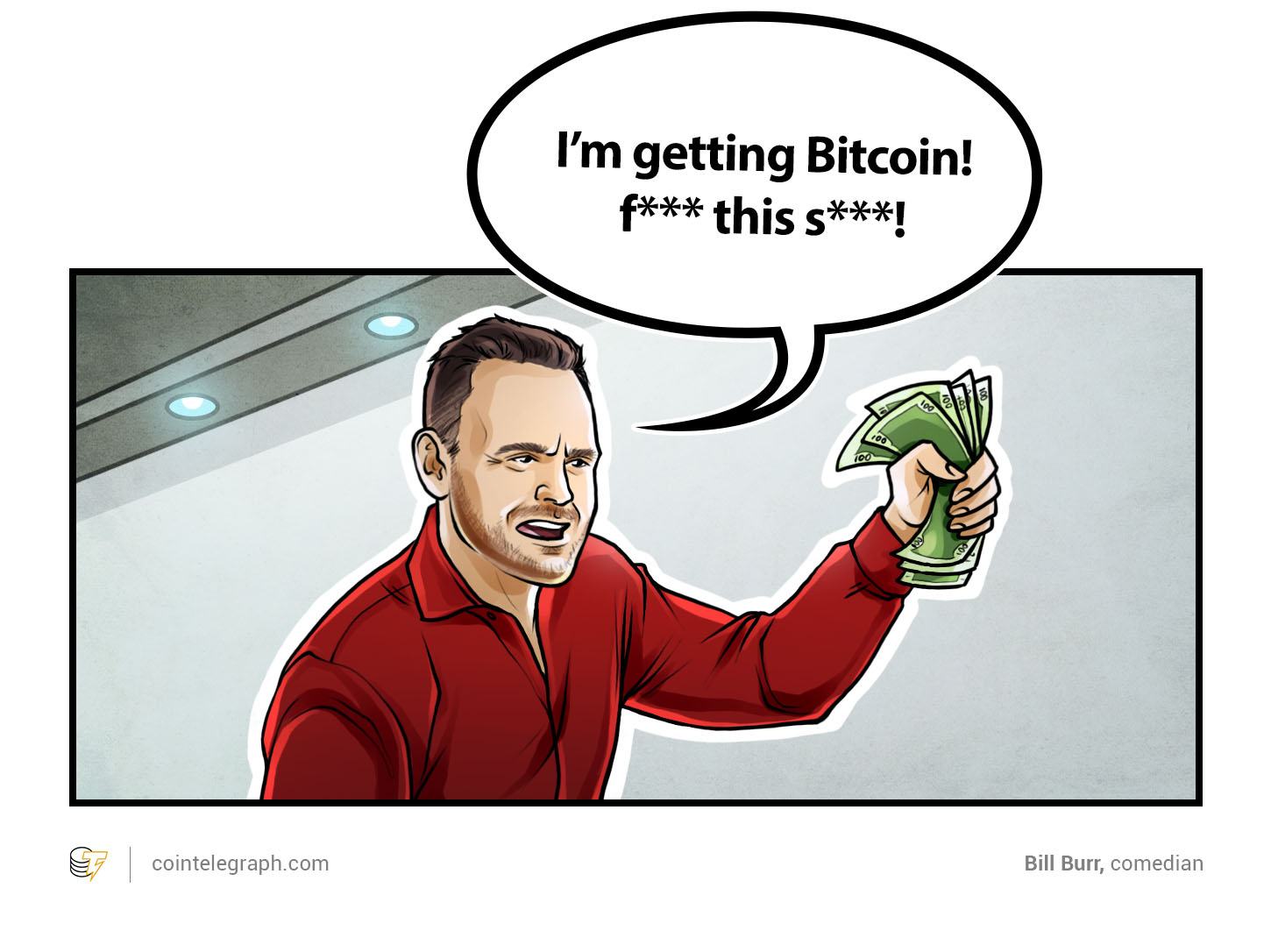 PlanB has updated his stock-to-flow forecast â€” and according to his popular model, the next big shift in Bitcoinâ€™s price is set to come before the end of 2020. Despite BTC struggling to hit $10,000 right now, the analyst believes the worldâ€™s biggest cryptocurrency is on track to begin surging toward $288,000 in a matter of months. PlanBâ€™s model has faced criticism of late, but he maintains that critics have yet to produce a viable alternative to his forecast, which has traditionally tracked price behavior extremely accurately. One of the skeptics is Nico Cordeiro, the chief investment officer at the crypto quant fund Strix Leviathan. â€œThe modelâ€™s accuracy will likely be about as successful at forecasting Bitcoinâ€™s future price as the astrological models of the past were at predicting financial outcomes,â€� he said.

A new ransomware is targeting macOS users who download installers for popular apps via torrent files. â€œEvilQuestâ€� asks victims to pay a ransom through the same static BTC address in every documented attack. One of the first signs that EvilQuest has deployed an attack is that MacOS Finder freezes. Once file encryption is complete, a text file is generated with ransom instructions. Emsisoft threat analyst Brett Callow believes EvilQuest is unlikely to be anything other than a small-scale threat, telling Cointelegraph: â€œThe fact that Macs have a relatively small market share means theyâ€™re not a particularly attractive target for ransomware groups, and theyâ€™re unlikely to invest significant resources in targeting Mac users.â€�

A Russian court has effectively declared that Bitcoin theft is not a crime. Back in 2018, two men impersonating FSB agents kidnapped someone and forced him into giving them 5 million rubles ($90,000) in cash and 99.7 BTC â€” worth about $900,000 at the time. The kidnappers were sentenced to eight and ten-year prison sentences, respectively â€” and as part of the criminal proceedings, the victim asked the court for the thieves to repay the funds they stole from him. Although the court said the criminals must repay the rubles, it declared it is unable to satisfy the claim for the BTC because cryptocurrencies arenâ€™t recognized by Russiaâ€™s laws as legal tender.

Prominent angel investor and internet entrepreneur Jason Calacanis says 99% of altcoin projects are â€œgarbageâ€� run by unqualified individuals but holds out hope for the 1% with the power to change the world. Calacanis, who backed the ride-hailing app Uber and the crypto trading app Robinhood, claimed almost all projects are under the control of â€œunqualified idiotsâ€� or â€œgriftersâ€� with below-average skills. â€œIâ€™m waiting for that 1% to deliver their product so I can talk to their customers,â€� he added. 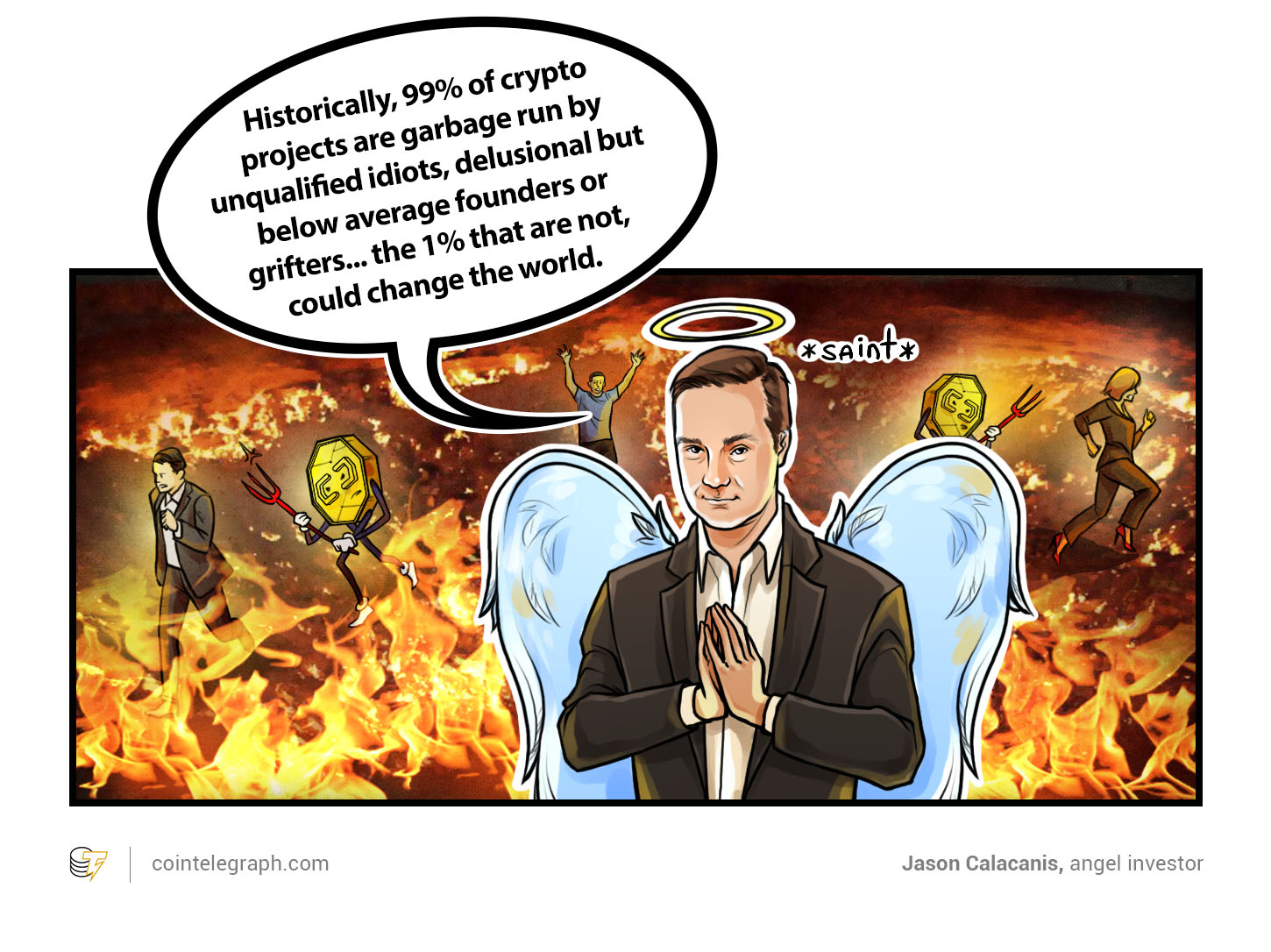 Cointelegraph Magazineâ€™s special feature looks at the evolving use of nonfungible tokens to drive mass adoption of blockchain tech â€” with art, collectibles and video games just some of the use cases.

Seven experts from different institutions and organizations discussed topics relating to diversity, inclusion, challenges and opportunities for LGBTQ+ with Cointelegraph. Read our neat summary of what happened here.

CZ and Buterin among top speakers at five-day online conference

Find out more about Unitize, a five-day online conference thatâ€™s being organized by BlockShow and San Francisco Blockchain Week and taking place from July 6â€“10.