The Bitcoin subreddit has seen a remarkable increase in the number of subscribers since the cryptocurrency’s price surged last summer.

The Bitcoin (BTC) subreddit has seen a remarkable increase in its number of subscribers since the cryptocurrency’s price spike last summer.

Cypherpunk and proclaimed Bitcoin maximalist Jameson Lopp posted a tweet on Dec. 23, saying “the rate of new subscribers to the /r/bitcoin subreddit accelerated after the exchange rate jumped this summer. It grew in size by 222,000 users – 22% growth in 2019.”

At the beginning of 2019, the subreddit broke a milestone of 1 million subscribers, which means that it has added more than 200,000 new members over the past year. 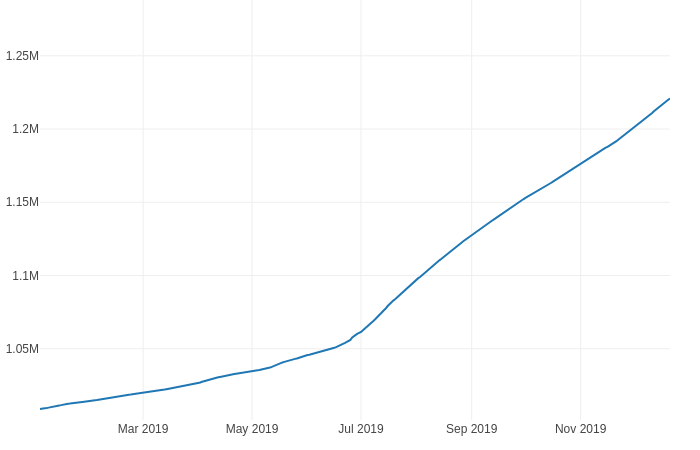 Reddit is a major forum for the cryptocurrency space, with many industry-related firms and foundations using it to interact with their user base. The Bitcoin community on Reddit started at the end of 2012, slowly gaining popularity until the leading digital currency hit $20,000 at the end of 2017, having grown by 1,950%.

The surge in the Bitcoin price met a generous response from markets, triggering mass consumer interest in both buying and trading the virtual currency, as well as joining the Bitcoin community online.

In May, the University of Notre Dame and the Pacific Northwest National Laboratory released a study on the speed and scale of cryptocurrency discussions on Reddit, which covered Reddit threads created in official subreddits and the broader crypto subs between January 2015 and January 2018. The researchers claimed to have found a strong correlation between Reddit conversation volume and coin prices.

In August, research firm Comparitech used a machine learning-based analysis tool to study more than 48,000 Reddit posts to determine which cryptocurrencies were viewed most favorably by the masses.

At the time, Sritanshu Sinha, an independent crypto author and analyst, noted that the overall reception that the crypto industry has received thus far on forums such as Reddit and Twitter has been quite warm. He was also quick to point out that, since the Reddit community views itself as being anti-establishment, its users are usually drawn to crypto much more than average investors.

Not all crypto observers believe social media sentiment to be an accurate gauge for crypto activity. One twitter user and self-purported Bitcoin observer responded to Lopp’s tweet, stating, “user numbers on social media platforms are meaningless in this day and age. they might all be bots.”