Bitcoin is now hovering around $5,000, as the cryptocurrency markets are on their third day of gains.

Wednesday, April 3 — Bitcoin (BTC) has tested the $5,000 mark for the first time since November 2018, as crypto markets are on the rise for the third day in a row. While some major cryptocurrencies are seeing a mild surge in price, others boast double-digit gains. 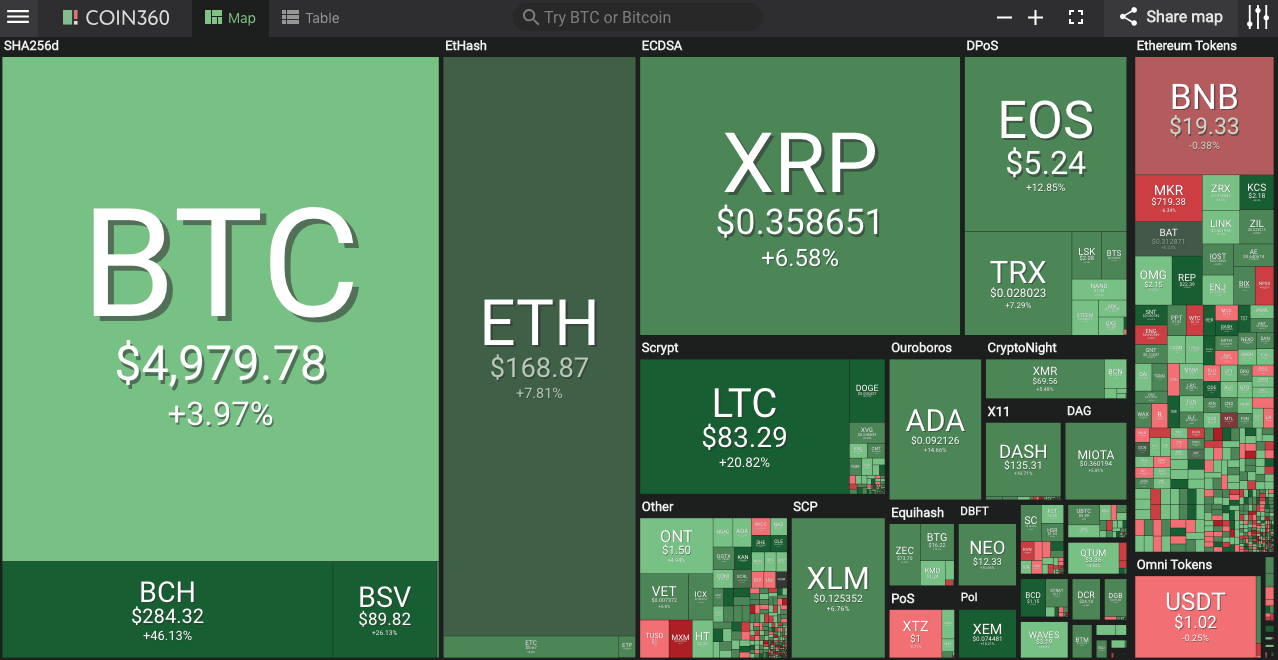 BTC, which skyrocketed yesterday and gained over 14 percent in price over 24 hours, spent a few hours above the $5,000 mark earlier today. The world’s top coin peaked at $5,043 at some point, according to CoinMarketCap stats, before going back to $4,900. As of press time, BTC is trading sideways, hovering around $5,007.

Bitcoin’s market cap has gained over $1 billion compared to yesterday’s charts, when BTC was mostly trading around $4,700. Reaching around $88 billion during the night peak, BTC market cap currently totals around $87.4 billion. 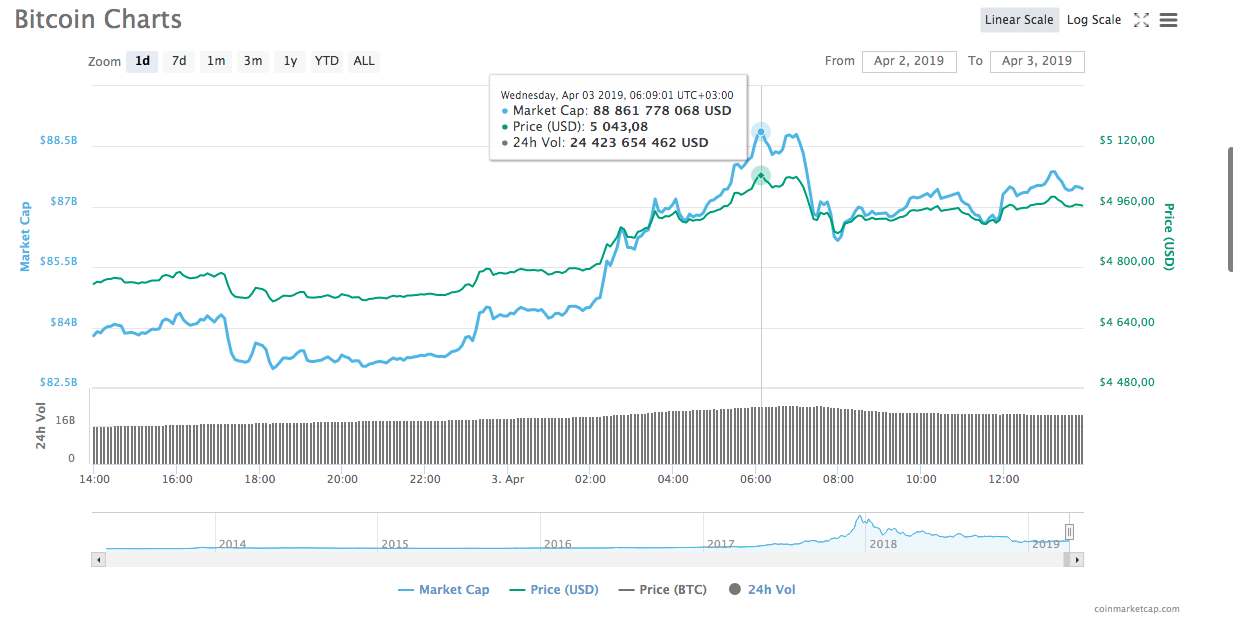 Ethereum (ETH), currently the world’s second-top cryptocurrency by market cap, enters April 3 in the green, with up to 10 percent gains in 24 hours. While the coin’s rate was hovering around $150 yesterday, today it is trading above $165. ETH’s market cap gained almost $2 billion in a day, climbing up to $17.6 billion at press time. 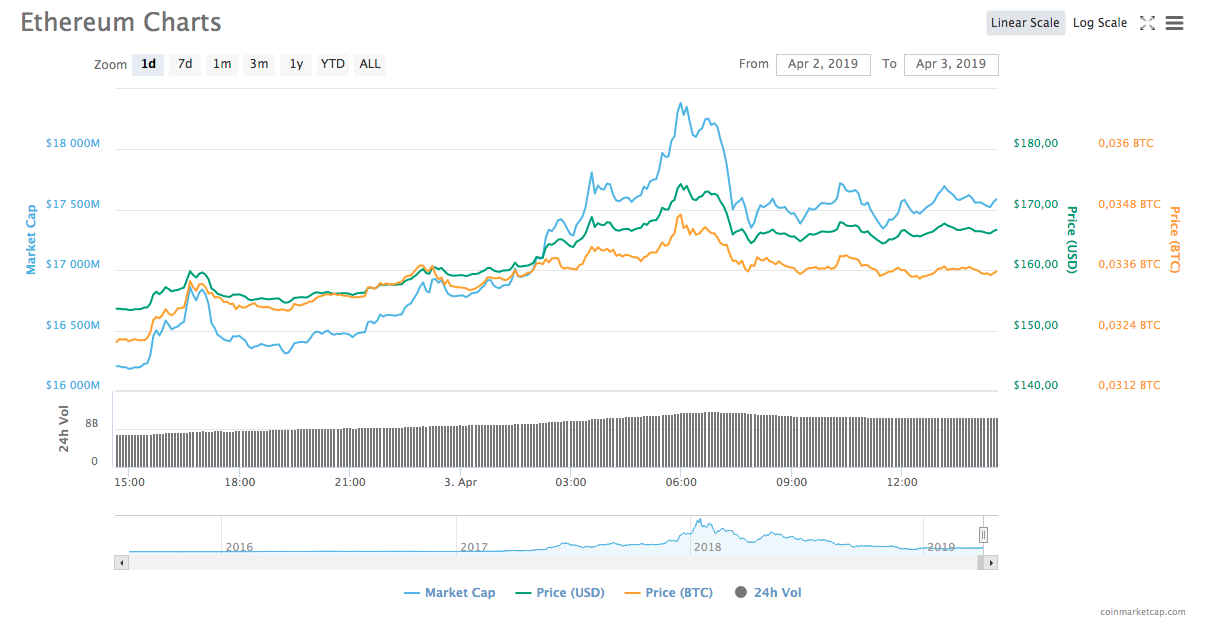 Ripple (XRP), ranked as the third-top cryptocurrency, has also been on the rise for the third consecutive day. The coin, which is now trading at $0.35, saw over 5 percent gains within 24 hours. Its market cap is $1 billion larger than yesterday — over $14.7 billion. 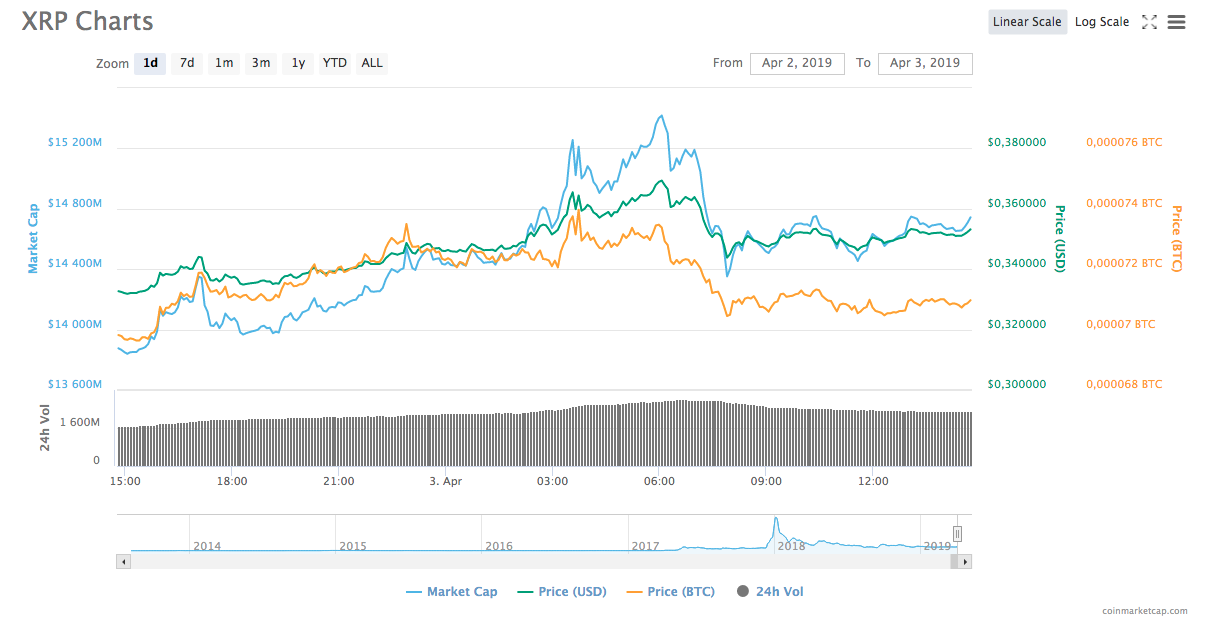 The total market capitalization of all cryptocurrencies has also seen a significant increase in comparison to April 2, when it peaked at $163 billion. The highest point today has been at $176.9 billion, declining to around $173.8 billion at press time.

As for other altcoins, all major currencies except Maker (MKR) and Tezos (XTZ) are in the green and seeing moderate to visible gains in the last 24 hours. Bitcoin Cash (BCH) has jumped to over $280, showing gains of around 50 percent. Another major winner is Litecoin (LTC), gaining over 20 percent within a day and trading at $84.

Dogecoin (DOGE), recently promoted by Tesla’s Elon Musk as his favourite coin, has seen over a 30 percent rise in price following the entrepreneur’s tweet.

The major market recovery, which started late April 1, has been widely discussed both in the crypto community and financial world. Most of the crypto insiders state that there is no particular reason behind the leap, and that all of the explanations are currently speculatory.

For instance, Binance’s CEO Changpeng Zhao, most known as CZ, admits that he’s “clueless” about the real causes of what is happening, while Bloomberg author Eric Lam also believes that there is no definite answer.

However, Lam cites an April Fool’s Day story that claimed that the U.S. Securities and Exchange Commission (SEC) had finally approved a Bitcoin ETF as possibly affecting the crypto markets, and CNBC shares his stance.

Another reason cited by Bloomberg is, conversely, Brexit, as some believe that investors are changing pounds to BTC in the wake of Britain’s divorce with the EU. Some earlier forecasts also cited this theory.

Reuters mentions a mysterious order that could have been responsible for boosting crypto prices as well. According to the financial experts quoted by the news agency, the gain was probably triggered by a 20,000 BTC order (around $100 million as of press time) that was spread around U.S.-based crypto exchanges Coinbase and Kraken and Luxembourg’s Bitstamp.