Crypto markets have seen a rebound after a slight drop yesterday, with Bitcoin and Ethereum back above $8,000 and $500 respectively.

The Crypto market continues to hold gains around the same levels it reached after a sharp spike on Thursday, April 13, with Bitcoin (BTC) and Ethereum (ETH) trading above the $8,000 and $500 levels respectively today, April 17.

The market’s rebound into the green comes after a slight drop yesterday, April 16. 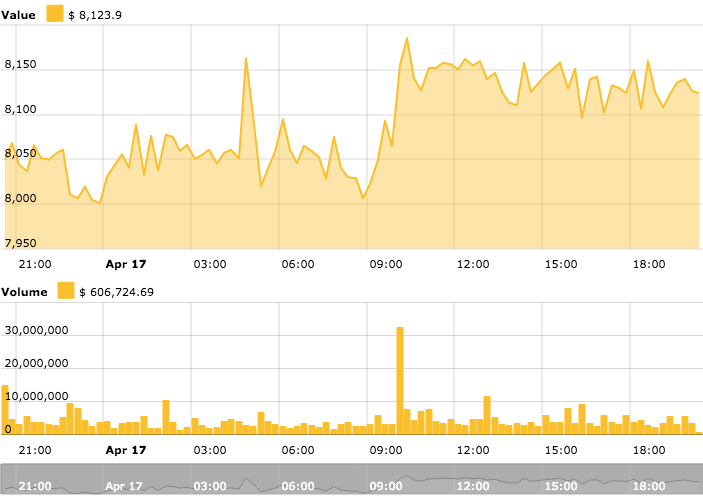 Ethereum’s price has grown by almost 2 percent on the day to press time, and is currently trading at $515 by press time. Almost all of the top 100 coins listed on CoinMarketCap are in the green, up as much as 30 percent on the day. Among the top 10 coins, altcoins EOS and Stellar have seen the most growth over a 24 hour period, both up about 11 percent at press time.

Total market cap of all cryptocurrencies is at $332 bln, having increased by a bit over 3 percent since yesterday, April 16, up 25 percent on the week.

The crypto markets’ move upward could in part be caused by the arrival of tax day in the US today, April 17, presumably marking the end of crypto selling to pay taxes, as Wall Street strategist Tom Lee pointed out last week.