The price of Bitcoin may be entering an uncertain phase, as on-chain data says BTC traders have established $10,000 as a strong support level.

The price of Bitcoin (BTC) has increased by 28% in the last 30 days and 36% at the weekly peak. Following the top cryptocurrencyâ€™s first breakout above $12,000 since September 2019, the sentiment remains optimistic. Many fundamental factors point toward an extended Bitcoin uptrend over the long run. Bitcoin has a favorable macro backdrop with the decline of the United States dollar and the rising demand for gold. The premier cryptocurrency has continuously rallied with the U.S. stock market and gold, demonstrating a consistent increase in appetite for BTC.

Bitcoin also has strong technical factors buoying the sentiment around the entire cryptocurrency market. The hashrate of the Bitcoin blockchain network is at an all-time high once again, which suggests a stable mining industry. The closure of BTCâ€™s weekly candle above $11,900 indicates a strong uptrend following weeks of consolidation in June. 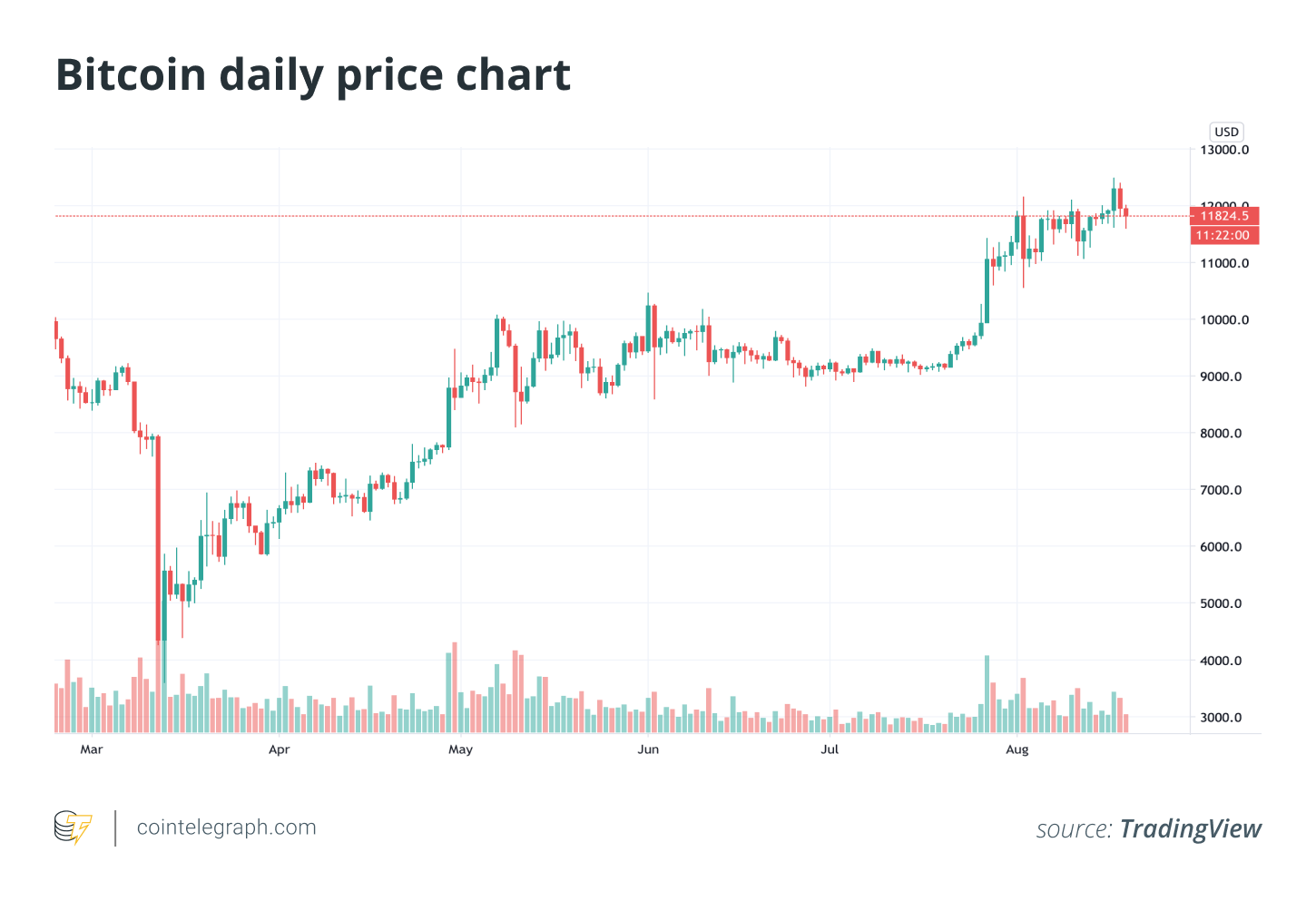 Due to the abrupt rejection of Bitcoin at $12,400, traders seemingly anticipate a stable consolidation phase over the next several weeks, cooling down the futures market, neutralizing the funding rates, and providing the market with a stronger foundation for a prolonged recovery.Â

The term â€œfunding rateâ€� refers to the mechanism used by Bitcoin futures exchanges to provide market balance. If the market is majority long, then long contract holders need to compensate short holders. When funding rates are too high, the price of BTC stagnates, since itâ€™s less compelling to long the market.

Based on various metrics and the pause of Bitcoinâ€™s rally at a pivotal resistance level, crypto traders say that BTC is likely to stay in the current price range. Michael van de Poppe, trader at the Amsterdam Stock Exchange and Cointelegraph contributor, thinks BTC could stagnate throughout August and possibly into September, meaning that, altcoins could reap the benefits at least in the short-term: â€œThe general scenario is that weâ€™ll be ranging a bit here, before continuation of the downwards momentum. Overall -> alts [altcoins] (smaller ones) continue to do well.â€�

A minor pullback in the near-term would be a healthy reset for the price of Bitcoin, especially when funding rates are considered. Prior to the drop, the funding rate of Bitcoin futures contracts on BitMEX and Binance Futures were nearing 0.0864% and 0.1199%, respectively. 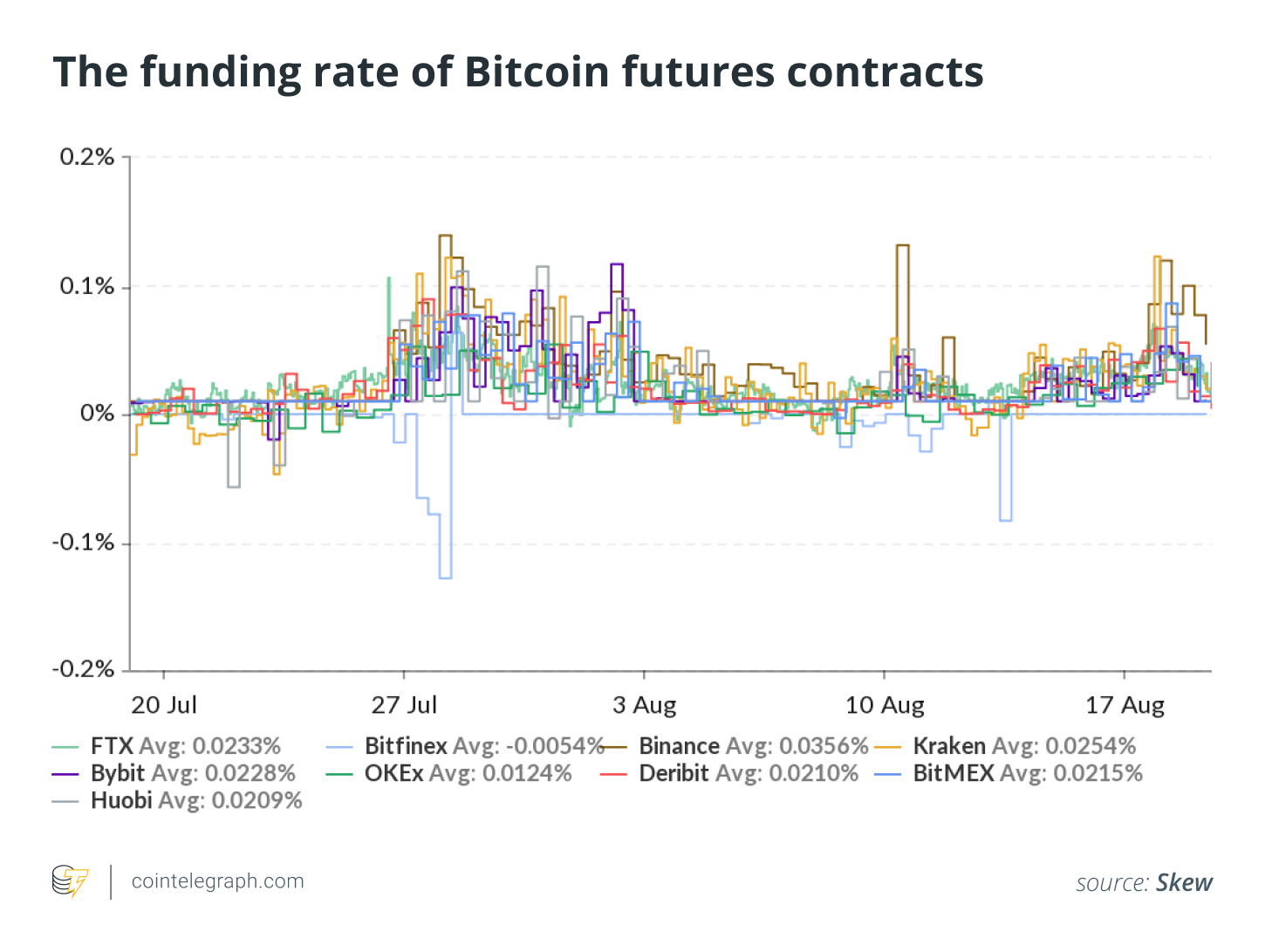 When funding rates are this high, it could leave Bitcoin and other major cryptocurrencies vulnerable to a potential long squeeze. As such, a stabilization period supplemented with a minor pullback and a drop in funding rates could benefit the longer-term trend of Bitcoin.Â

Considering numerous factors, including the positive reset of funding rates, derivatives trader Cantering Clark said that the BTC trend is overall positive, but uncertainty is beginning to build in the crypto market following BTCâ€™s overnight drop. When the sentiment around Bitcoin turns cautious after weeks of rallying, it is generally optimistic. According to Clark:

â€œThis is good, itâ€™s already happening. The charts are coming out. Uncertainty is brewing. â€˜Distribution,â€™ 7k calls, top, etc etc. Bring it to the brink, flip funding and then rip it up again.â€�

Similarly, Mohit Sorout, founding partner of Bitazu Capital, said the recent pullback would cool off the overheated derivatives market. The futures market overran the spot market in July, as BitMEX Research and CryptoCompare show. As the crowded futures market now begins to settle down, it could further strengthen the BTC uptrend. Mohit also said: â€œCool off overheated derivs for a few days here then take us to the promised land.â€�

Over the long-term, researchers, especially on-chain analysts, are optimistic about the trend of Bitcoin due to an inflow of institutional capital into Bitcoin, more wallets holding onto BTC, and the amount of Bitcoin reserves on exchanges declining. The three data points indicate that fewer retail investors, for now, are willing to sell BTC at current prices, according to Glassnode: â€œNet Unrealized Profit/Loss (NUPL) broke in to the â€˜Beliefâ€™ zone for the first time over a year. Its current value is lower than the last time $BTC hit $12,000 â€” suggesting potential for more price upside from here.â€� 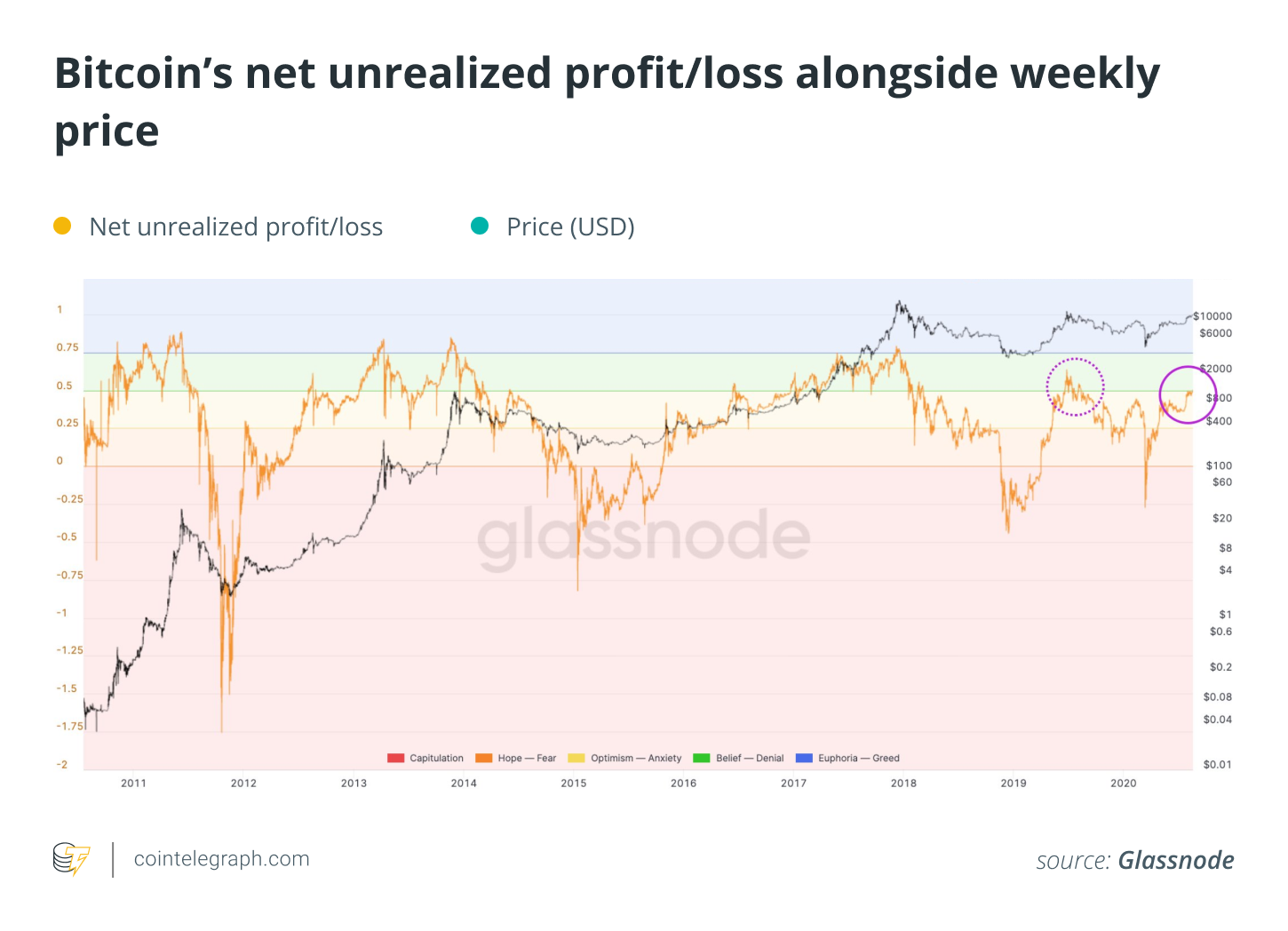 While the momentum of Bitcoin remains generally strong due to institutions like Microstrategy acquiring more BTC and retail investors continuing to withdraw their Bitcoin from exchanges, whales or miners starting a BTC sell-off remains a persistent threat.

As Cointelegraph previously reported, whale clusters are found in the $12,000 to $14,000 macro resistance range, with $12,000 either marking a profit or break-even point. Whales typically donâ€™t sell when they are below their break-even point, and instead wait for sufficient liquidity in the market. Similar trends were spotted in October 2019 and February 2020, when BTC abruptly dropped from $10,500.

Overall, as the OKEx on-chain data report shows, traders are beginning to treat the $10,000 level as a strong area of support. The exchange found that many traders closed their old positions from $6,200 to $9,700 and built up new positions at $10,000 onward. As BTC has remained above $10,000 for a prolonged period, the likelihood of a newfound rally would likely increase: â€œA lot of older positions (between $6,200 and $9,700) were recently (in the last seven weeks) closed for profit, reducing the downward pressure on BTCâ€™s price.â€�

The trend favors the alts?

One consistent theme throughout the rally of Bitcoin since early June has been the booming altcoin market. Led by the interest in decentralized finance, some altcoins have outperformed BTC in the past several weeks. Yearn Finance (YFI), Chainlink (LINK), Band Protocol (BAND) and Aave (LEND) all posted two-to-ten-fold gains.

Researchers at Santiment, an on-chain analysis firm, believe the so-called alt season â€œis about to be finished.â€� If it does, there are two scenarios: profits flow into stablecoin and the market corrects, or profits flow into Bitcoin:

â€œAlts will enjoy the party, one by one, crazy money will move from one to another, there are still some alts to pump (though their number is getting less and less). […] After process is over either we all together go down, or Bitcoin will go up alone.â€�

In the medium- to long-term, on-chain analysis and the trend of altcoins suggest that the $10,000 support level of Bitcoin could hold. An extended accumulation phase above a key level could catalyze another BTC rally in the final quarter of 2020.