Discovering Atlantis: Ethereum Classic Hard Fork and What Will Change

Ethereum Classic is set to undergo an Atlantis hard fork in September 2019, which will bring interoperability between sibling blockchains

On June 19, the Ethereum Classic (ETC) community announced that the Atlantis hard fork is now in its testing stage. As Cointelegraph previously reported, the update is scheduled for Sept. and will take place on the block 8.75 million.

Also, as Cointelegraph reported, ETC Labs, which actively contributed to the Atlantis project, will soon introduce another solution for Ether (ETH)/ETC interoperability being part of Metronome Validator Network. This move brings transparency on certain aspects of the upcoming upgrade.

ETC itself was introduced after the DAO attack back in 2016, when 3.6 million ETH had been stolen within the first few hours. At the time, it was equal to $70 million. To reverse the malicious transactions, Ethereum hard forked and thus gave birth to Ethereum Classic. At present, ETC is the 19th-biggest cryptocurrency, as its market capitalization of over $883 million, according to coin360.com. However, let’s take a deeper look at the motivations, technicalities and potential consequences of the hard fork.

Why the hard forking?

A hard fork is a radical change to a protocol of a blockchain, which can be carried out to reverse transactions, add new functionality or fix security risks. Unlike the previous time when the DAO was attacked, the hard fork is more of a beneficial renewal rather than a necessary measure. According to the blog post of Ethereum Classic Labs, the upcoming hard fork is aimed at presenting secure high-quality blockchain software while taking into account the community’s concerns.

Atlantis is a consistent, no-rush update that would ensure compatibility of ETC with Ethereum, leading to an easier collaboration of sibling blockchains. The team also intends to improve the functionality and stability of ETC. The last point is especially relevant, as the network had experienced a “51% attack” last January.

In order to complete the technical development of the main client, Classic Geth (which 68% of the network uses), ETC Labs has collaborated with ChainSafe Systems and cooperated with ECC, Parity and IOHK. A team of developers, ETC Labs Core, who are believed to be among the most skillful, has actively contributed to Multi-Geth preparation. As for ETC Labs’ blog post, “The ETC community has shown great attention to and support” for the hard fork. “All stakeholders have fully participated in the discussions on the details, scope, and timing of the hard fork,” the developers said.

ETC Labs and Metronome will issue a cryptocurrency named MET, which will be transferable between the blockchains. This is possible because “chainhopping” is a property of the blockchain asset and can be transferred from one chain to another. According to the blog post, “ETC Labs will support Metronome’s Validator Network to ensure reliable and secure transaction verification that guards against double-spend attacks and provides fluid cross-chain transactions.”

On June 11, after an intermediate scheduling call, stakeholders from North America, Europe, and Asia agreed upon the hard fork’s timetable: It was decided that ETC Kotti and ETC Morden testnets would be activated at blocks number 716,617 and 4,729,274 respectively, and finally the hard fork would be implemented at block 8,500,000. 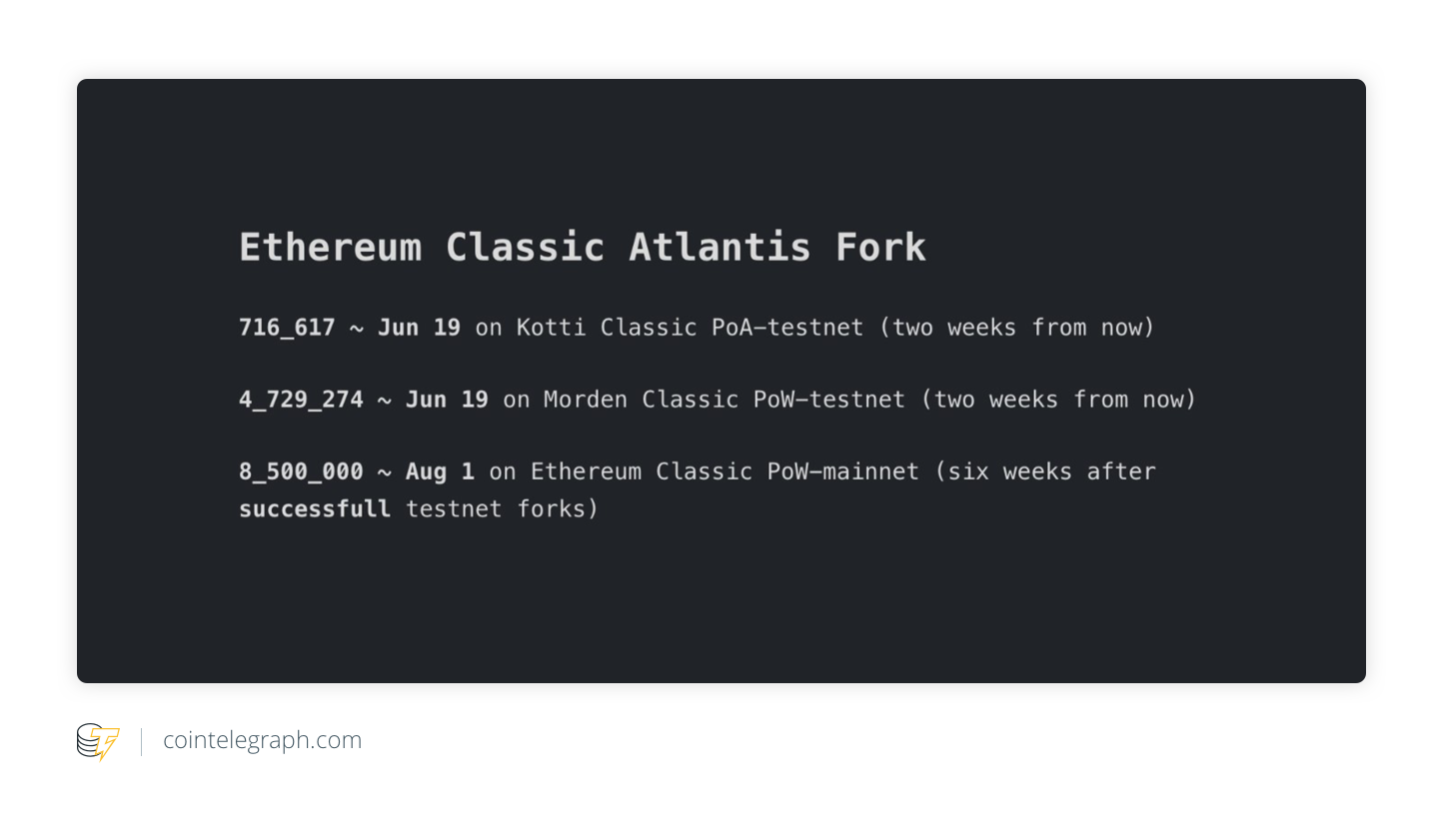 However, bearing in mind that the chosen block would run on a Sunday, ETC Labs adjusted the schedule during Ethereum Classic Improvement Protocol (ECIP) finalization call on June 20. ETC Labs announced that the hard fork would then be set to occur on block height number 8,772,000 (which will be hit on Tuesday, Sept. 17, around noon UCT) to have more parties involved in implementation.

The decision was unanimous, and the deadline of the release seems rock-solid, according to a statement form ETC Labs to Cointelegraph:

“The community has had a number of meetings to discuss timing, scope and involvement, and we have decided on the direction and timing of the Atlantis release. So, the decision was made and the community and stakeholders are all moving forward.”

What do we know about Atlantis?

Atlantis is there to incorporate multiple Ethereum Improvement Proposals (EIPs) that have been around on Ethereum for some years already. The mission of the hard fork is to pull ETC up to ETH’s latest protocol enabling easier interoperability between them.

ETC Labs Core described some of the features of ECIP-1054 (Atlantis) in their blog post, explaining what exactly the community should be expecting.

Zero-Knowledge Succinct Non-Interactive Argument of Knowledge (zkSNARK) is the core of ECIP-1054. What hides behind the spooky title is a familiar zero-knowledge proof. It implies that no interaction between prover and verifier is needed, which “allows one to prove x without having to convey any information to the verifier other than they know x.”

Сustomary encryption schemes efficiently secure data but need to be decrypted before computation. To change that, zkSNARK uses the Homomorphic Encryption technology that allows computations on encrypted data requiring no special access: The prover and verifier only share a dataset or parameters of the encryption.

Further, by updating to zkSNARK, users obtain increased privacy necessary for data such as identity or location, which is now totally transparent on the blockchain. This feature is based on EIP-196. As for its description, zkSNARKs could in theory be implemented by Ethereum Virtual Machine, yet they would not fit the block gas limit due to the cost.

EIP-196, for its part, suggests to adjust certain parameters of znSNARK so that the technology would perform effectively at a reduced gas cost. Meanwhile, EIP-197 ensures the verification of zkSNARK contracts on the Ethereum Classic blockchain. The EIPs make the technology flexible enough to be further improved and advanced without another hard fork.

Among the benefits that the update poses, there will be a more predictable ETC issuance rate. The current formula lacks the “uncle rate,” which will be fixed by EIP-100 (“Change difficulty adjustment to target mean block time including uncles”). Furthermore, deployment of a decentralized application (DApp) after the hard fork, as well as migration of DApps between Ethereum and Ethereum Classic, will become easier and more efficient.

The community can also expect a better performance of Ethereum Classic, as EIP-161 will optimize it by removing empty accounts. This will “debloat” the network and speed up sync times. Another improvement proposal is to change the contract-code size limit to 24,576 bytes.

The last proposal happened to be the stumbling block within the ETC community: Initially, co-founder of Ethereum Vitalik Buterin introduced EIP-170 to prevent an attack scenario. But, if implemented in ETC, it would put a fixed cap on the size of smart contract code that could be run in a single transaction, and this creates a point of contention among the Ethereum Classic community. Some of the developers hesitated whether it was right to include the EIP in the upgrade, as it can be applied to a transaction validation instead of a block validation, which makes it a soft fork. According to ETC developer Anthony Lusardi:

“These rules can simply be applied to transaction validation rather than block validation, making it a soft fork rather than a hard fork. […] It’s vitally important to stick to pre-agreed rules when they’re defined.”

The Atlantis hard fork proposal on GitHub points out that “establishing and maintaining interoperable behavior between Ethereum clients is essential for developers and end-user adoption, yielding benefits for all participating chains (e.g., ETH and ETC, Ropsten and Morden, Görli and Kotti).”

Atlantis should provide wider capabilities for interoperability between the blockchains and off-chain scaling protocols. The faster interoperability is implemented, the sooner the traditional methods of payment and banking will be disrupted, and this is where cooperation matters.

“EF has publicly stated the intention to deprecate ETH and ETH 2.0 is not actually a 2.0. It is a separate project and EF has legal privileges to force their brand. So everything that has been invested into ETH will be deprecated or forced to move to this entirely separate network at the cost of all the users. If ETC is compatible with ETH while respecting ETC value proposition, then ETC is a sanctuary for ETH refugees.”

The teams contributing to Atlantis and Metronome are chasing a mutual goal: to enable “cross-chain transactions to quickly, easily, and securely occur between ETH and ETC.”

To split or not to split

Taking into consideration all of the changes that the Atlantis hard fork will bring to the ecosystem, a rather successful adoption of the update can be expected. It’s been positively accepted by the stakeholders, as the calls demonstrate. “The community found consensus, this will not split the chain,” a user named BabySocrates claimed in the Discord chat.

Commenting on the origin of the proposed features, executive director at ETCC, Bob Summerwill, stressed that “all of the Atlantis changes are from ETH, […] rather than being anything new specific to ETC.” He also confirmed the proposed date of hard fork, Sept. 17: “Yes, the deadline is realistic.”

Ethereum Classic is on the verge of a new stage of technological advancement, and the community has big expectations regarding changes proposed by the Atlantis hard fork.

ShareTweet
Comments Off on Discovering Atlantis: Ethereum Classic Hard Fork and What Will Change