De Mol claims that consumers have lost as much as 1.7 million euros (over $1.9 million) due to the ads, and his reputation was damaged as a result.

It is not the first time the California-based media giant is being sued over fake bitcoin ads — and, despite Facebook’s efforts to eliminate the problem, it seems that the issue persists.

Notably, the social media giant set a precedent for other big tech companies, including Google and Twitter, which soon followed suit and introduced similar regulations on their platforms.

Specifically, Facebook declared at the time that it would prohibit ads that use “misleading or deceptive promotional practices,” referring specifically to initial coin offerings (ICOs) and cryptocurrencies. Rob Leathern, product management director at Facebook, explained the company’s decision in a blog post:

“We want people to continue to discover and learn about new products and services through Facebook ads without fear of scams or deception. That said, there are many companies who are advertising binary options, ICOs and cryptocurrencies that are not currently operating in good faith.”

The ban was “intentionally broad,” meaning that the social media company decided to ban all cryptocurrency ads on its platforms (namely Facebook, Instagram and Audience networks) first, and then learn how to select the ones that are actually “deceptive.” However, Leathern also mentioned that the company intended to “revisit this policy and how we enforce it.”

Indeed, in June 2018, Facebook partly reversed the ban, once again allowing cryptocurrency ads on its platform — however, only from preapproved parties this time. The ban on ICOs, however, was kept in full effect. Hence, Facebook’s revised “prohibited products and services” policy states:

“Starting June 26, we’ll be updating our policy to allow ads that promote cryptocurrency and related content from pre-approved advertisers. But we’ll continue to prohibit ads that promote binary options and initial coin offerings.”

Further, the updated policy requires advertisers to submit an application beforehand so that Facebook can see if they are fit to run crypto-related ads. Specifically, candidates have been advised to include “any licenses they have obtained, whether they are traded on a public stock exchange, and other relevant public background on their business.”

Ultimately, Facebook stated that “not everyone who wants to advertise will be able to do so.”

Despite the extra measures from Facebook, it appears that fraud-related crypto ads still manage to find their way to the platform — as a result, the social media giant is now in the midst of a major lawsuit. 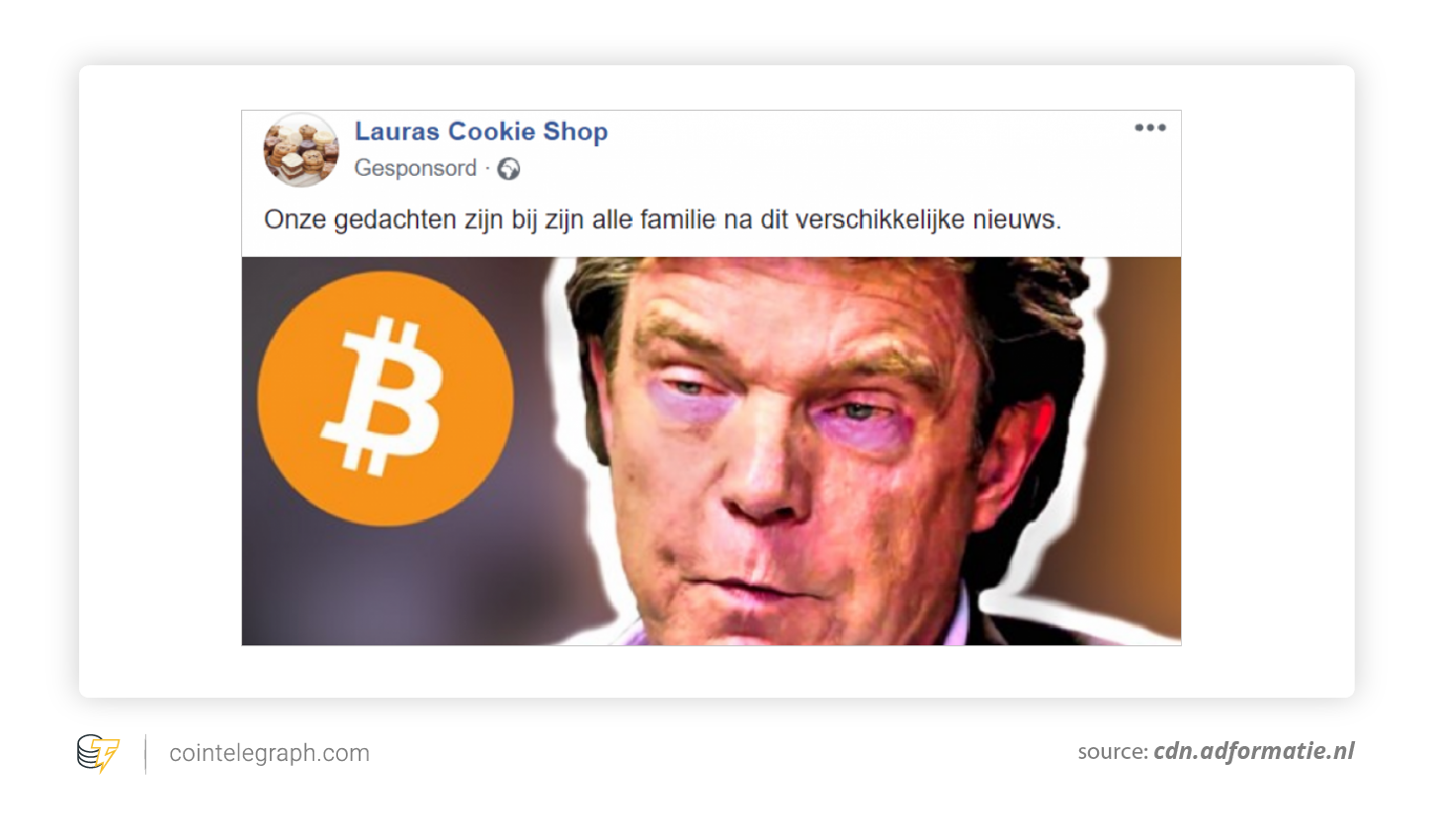 The case was filed by John De Mol, a 64 year-old Dutch entertainment mogul whose net worth is estimated to be $1.7 billion.

It is not the first time De Mol, who is affiliated with international TV hits including “The Voice,” “Deal or No Deal,” “Fear Factor” and “Big Brother,” has brought up Facebook bitcoin ads that capitalize on his image. He first encountered the problem in October 2018, as Jacqueline Schaap, a lawyer from De Mol’s legal team, told Cointelegraph via email:

“John de Mol noticed the ads for the first time in October 2018, we do not know whether these were the first adds to appear. We just have not noticed them before, but that does not mean that they have not been published.”

At the time, he issued a public statement, saying that none of these ads had been given permission to use his name or image. Specifically, as per De Telegraf’s report, people were asked to transfer money to a company called Bitcoin Profit, which claimed to be backed by De Mol. The ad had reportedly been deleted by the time that article was published.

Now, De Mol is suing Facebook before the Amsterdam District Court, as the problem is still urgent for the media tycoon. According to court documents obtained by Cointelegraph, the ads featuring De Mol’s images promoted cryptocurrency scams on Facebook and Instagram, which allegedly damaged his reputation.

The plaintiff is accusing Facebook of failing to avert the ads and not being able to respond to the complaints on time. Moreover, De Mol’s lawyers asked Facebook to hand over identifying data about the people who create such advertisements.

Further, De Mol’s legal team claims that consumers have lost as much as 1.7 million euros (over $1.9 million) due to the ads, also noting that a number of other Dutch celebrities have been targeted. Schaap told Cointelegraph that the figure was produced from “several newspaper/internet articles” and that it has been mentioned by Fraudedesk, a local organization that raises public awareness about fraudulent activities.

A representative from Fraudedesk confirmed to Cointelegraph that the 1.7 million euros is the amount that has been reported to them by almost 200 people who engaged with the fake ads since 2017. The organization’s spokesperson wrote via email:

“Generally only 10% is reported to us, so this amount is just the tip of the iceberg,”

In a Reuters report, Schaap is quoted as saying that Facebook is responsible for such incidents, and that the current vetting process is not enough: “I don’t know what reality Facebook lives in, but that doesn’t work.”

In response, Facebook lawyer Jens van den Brink reportedly stated that the social media company could not be forced to monitor all ads on its platforms at all times, and that Facebook had removed the De Mol-linked ads promptly after being informed about the complaints.

Read more on this: Facebook’s Crypto Ad Ban Reversal Power Play Gets Their Own News Stuck

As per Reuters, when asked by the judge whether Facebook’s vetting includes checking the content of websites that advertisements link to, Van den Brink replied positively, but noted that the company’s software can be tricked by advertisers who change links in their ads or disguise the content of those pages. The lawyer also said that Facebook was trying to fix that problem.

Prior to the hearing, Facebook’s Leathern told reporters the company was actively trying to prevent fraudulent ads:

“The people who push these kinds of ads are persistent, they are well-funded and they are constantly evolving their deceptive tactics to get around our systems,”

The outcome of this case is not clear at this point. According to Reuters, the judge mentioned that the two sides might be able to reach a settlement.

Cointelegraph reached out to Van den Brink and Facebook for further comment, but neither of them replied to requests.

Evidently, De Mol is not the only celebrity who has been targeted by deceptive crypto-related ads on social media. On Twitter, numerous users and bots have been impersonating celebrities like Elon Musk and Vitalik Buterin to promote cryptocurrency giveaways scams.

On Facebook, the fraudsters’ tactic seems different. Instead of promoting giveaways, they mostly appear to describe “big” investment opportunities in nonexistent cryptocurrencies.

To give the appearance of legitimacy, such ads feature fake celebrity endorsement and replicate popular media websites like CNBC or Daily Mail. Ultimately, they trick unknowing users into giving up sensitive data, such as their credit card information. During their research on the matter, the publication The Next Web had detected at least two pages that massively used this strategy, both of which were reportedly registered from Bulgaria.

Although the Dutch entertainment magnate seems to be one of the very few public figures to take the fight over bitcoin ads to court, he is not the first one to do so.

In April 2018, Martin Lewis, a British journalist and TV presenter who created Money Saving Expert, a popular financial advice website, sued Facebook for defamation over fraudulent ads featuring his name. Specifically, he argued that crooks were using his reputation to trick people into bitcoin “get-rich-quick schemes” on the social media platform.

“The impact on people’s mental health of losing their retirement funds, or losing their children’s money that they thought they were investing is catastrophic and life-destructive,” he told Business Insider. Lewis also mentioned that he had been contacted by a person who had allegedly lost 19,000 British pounds ($25,000) because of a bitcoin ad featuring his face as well as a woman from Scotland who had been scammed out of 150,000 British pounds ($195,000) in a similar way.

To reach an agreement with Facebook out of court, Lewis requested an apology and a “manifest substantial change” in the way the company deals with fake ads, particularly the ones capitalizing on public figures. The TV presenter reportedly said that if he wins the lawsuit, he will donate any damages he is awarded to charity.

In January 2019, Lewis and Facebook came to an agreement after the social media giant announced it was donating 3 million British pounds ($4 million) to Citizens Advice — a United Kingdom-based network of charities — to launch a new project that would educate people about frauds and provide guidance for victims or potential victims.

Moreover, Facebook said it was going to create a new button for its U.K. users that will allow them to report potential scam ads, which would subsequently be reviewed by “a new dedicated team” at Facebook. The company’s regional director for Northern Europe, Steve Hatch, mentioned that if the tools prove to be effective, they could be introduced in more countries.

Lewis said that he was happy with the outcome and preferred it to facing Facebook in court, where he believes he could have won 50,000 to 100,000 British pounds ($63,500-$127,000). He also mentioned that the problem was not limited just to Facebook, since other platforms like Google and Yahoo had similar issues.

It is unclear how Facebook and other big tech companies aim to deal with fraudulent cryptocurrency ads in the future, but for now, the problem persists, dealing damage to common users and stigmatizing the crypto industry.

Lewis, for instance, suggested that Facebook should rely on manual labor because the technology has been failing to sweep away fake ads entirely:

“No one says that a technology company can only have technological solutions. If you can’t do it with technology, you know what you have to do, is you have to cut your profits and do it manually,”

However, Facebook might have something else up its sleeve: In April last year, Mike Schroepfer, Facebook’s chief technology officer, mentioned that the social media giant plans to use facial recognition to help stamp out scam ads, but admitted that it is “challenging to do technically at scale.”

ShareTweet
Comments Off on Dutch Billionaire Yet Another Victim of Deceptive Crypto Ads, Sues Facebook