With a few notable exceptions, most of the top 20 cryptocurrencies by market cap are fluctuating 2 percent in either direction on the day.

Wednesday, Feb. 13: Cryptocurrencies are seeing tempered price action overall. With a few notable exceptions, most of the top 20 coins by market cap are fluctuating 2 percent in either direction on the day, as data from Coin360 shows. 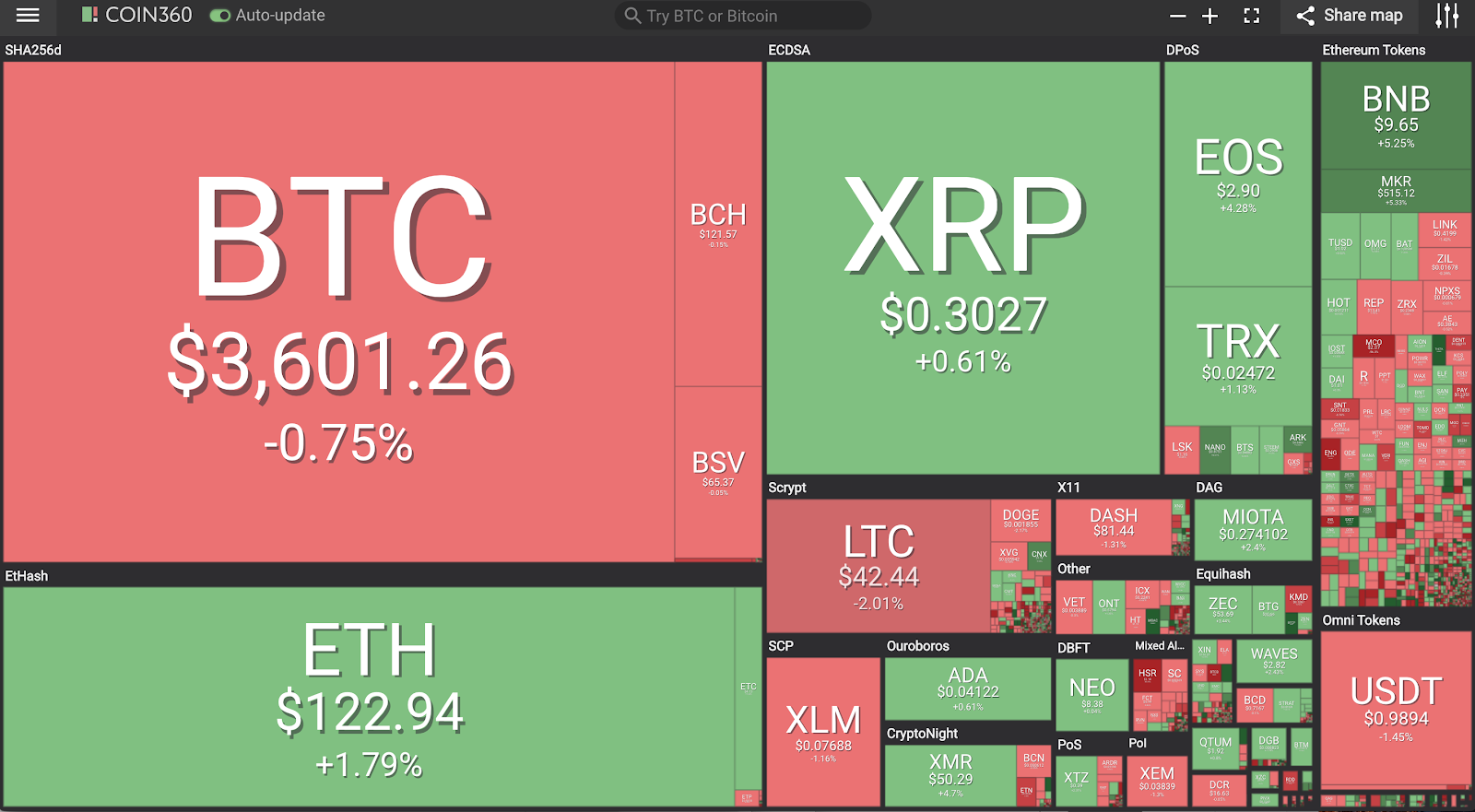 Top cryptocurrency Bitcoin (BTC) has seen virtually no price change on the day and is trading at $3,628 to press time, according to CoinMarketCap data. On its 7-day chart, the coin is up 6.5 percent after a spike on Friday, Feb. 8, when Bitcoin soared by almost $300 in value. On the month, the coin has come almost full circle to trade down by a mild 1 percent. 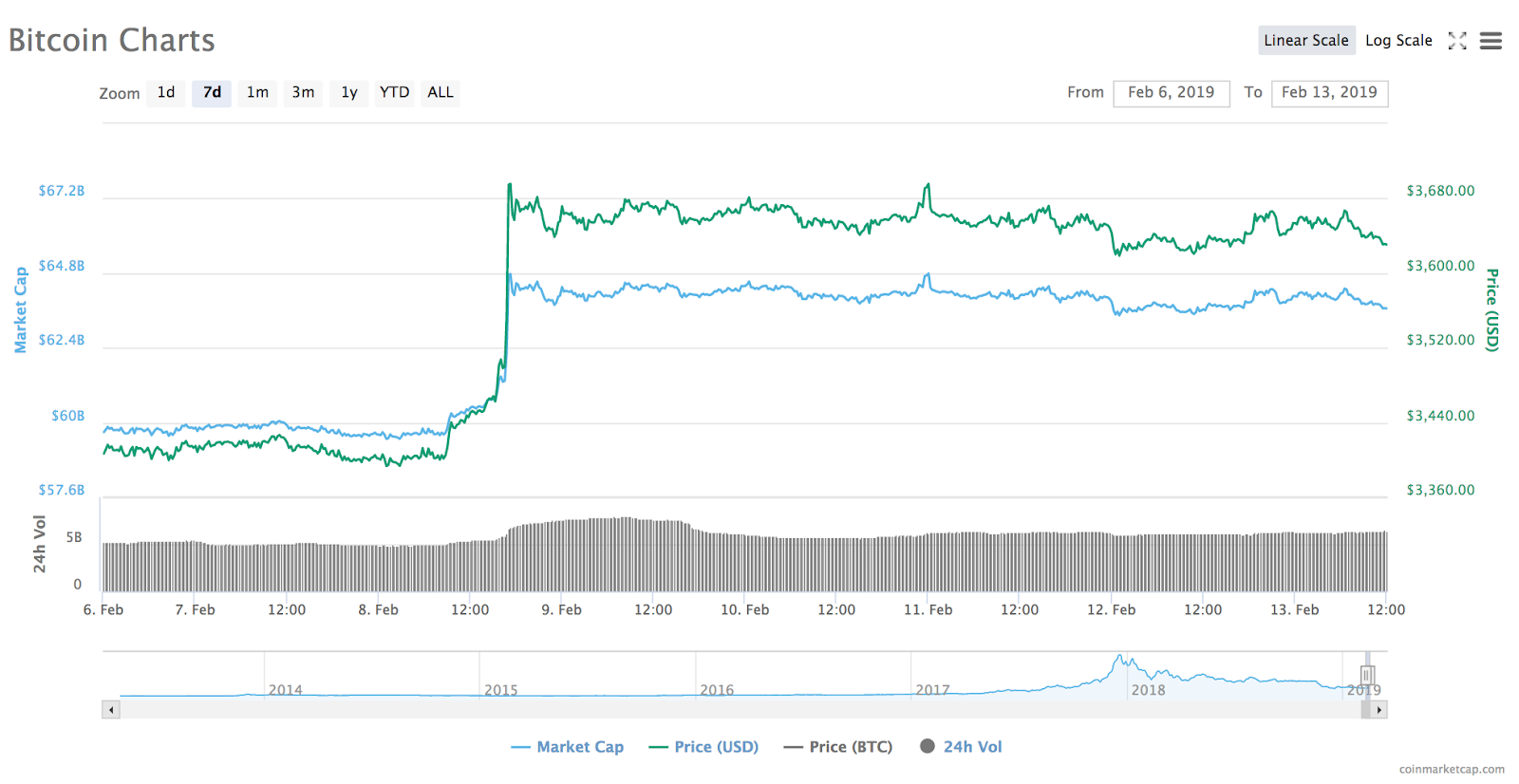 Mike Novogratz, a former Goldman Sachs partner and founder of crypto merchant bank Galaxy Digital, has today argued that Bitcoin occupies a unique place in the crypto landscape and will become digital gold — a sovereign store of value. The entrepreneur pitched $8,000 as a feasible medium-term price point, arguing that the market is “not going to bubble back up.”

Ethereum (ETH) — which regained its position as largest altcoin by market cap on Feb. 11 — is up around 2 percent on the day and trading at around $123 to press time. Since its strong performance on Feb. 8, the altcoin has seen consistent growth in recent days, bringing its weekly gains to a bullish 19.4 percent.

Over the medium term, Ethereum is nonetheless trading slightly lower than it was at the start of its one month chart, down by around 1.6 percent. 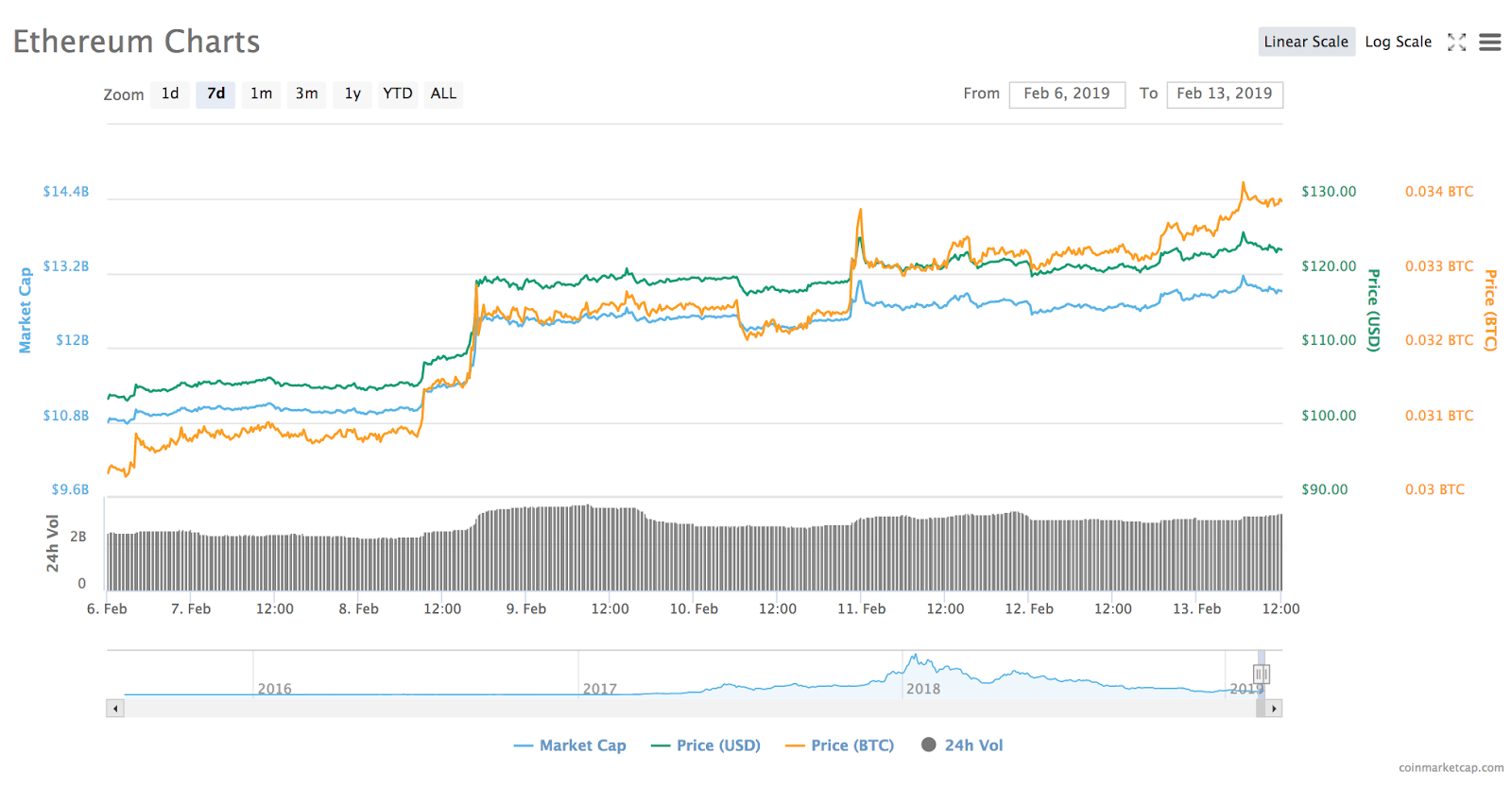 Ripple (XRP), currently second-largest altcoin by market cap, is seeing virtually no movement on the day, and is trading around $0.302 at press time. Up a fractional 0.33 percent over the past 24 hours, the asset has however seen close to 4 percent in solid growth on the week. Monthly losses are at 9 percent. 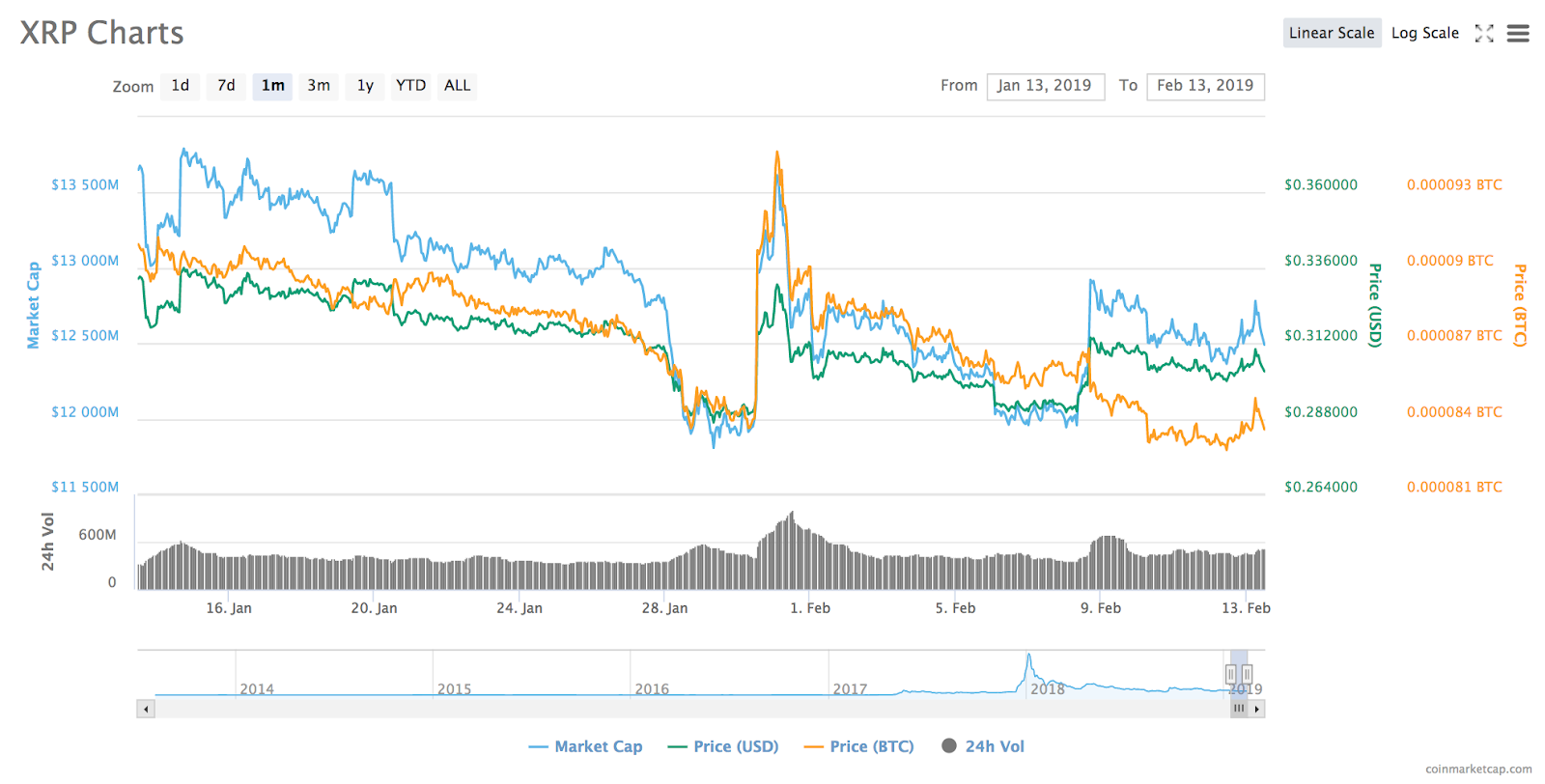 Most of the remaining top 20 coins on CoinMarketCap are all seeing minimal changes. Litecoin (LTC) has seen close to a 2 percent loss on the day to trade around $42.54. After seeing exceptionally strong gains last week, LTC had briefly dislodged EOS and Bitcoin Cash (BCH) as fourth-largest cryptocurrency by market cap, but it is now back to fifth position, with a market cap of around $2.57 billion.

EOS, now ranked fourth, has today continued to consolidate its solid growth, up a solid 1.7 percent on the day to trade at $2.84 having seen gains of over 6 percent yesterday.

The total market capitalization of all cryptocurrencies is around $120.5 billion as of press time, up around 8 percent on the week. 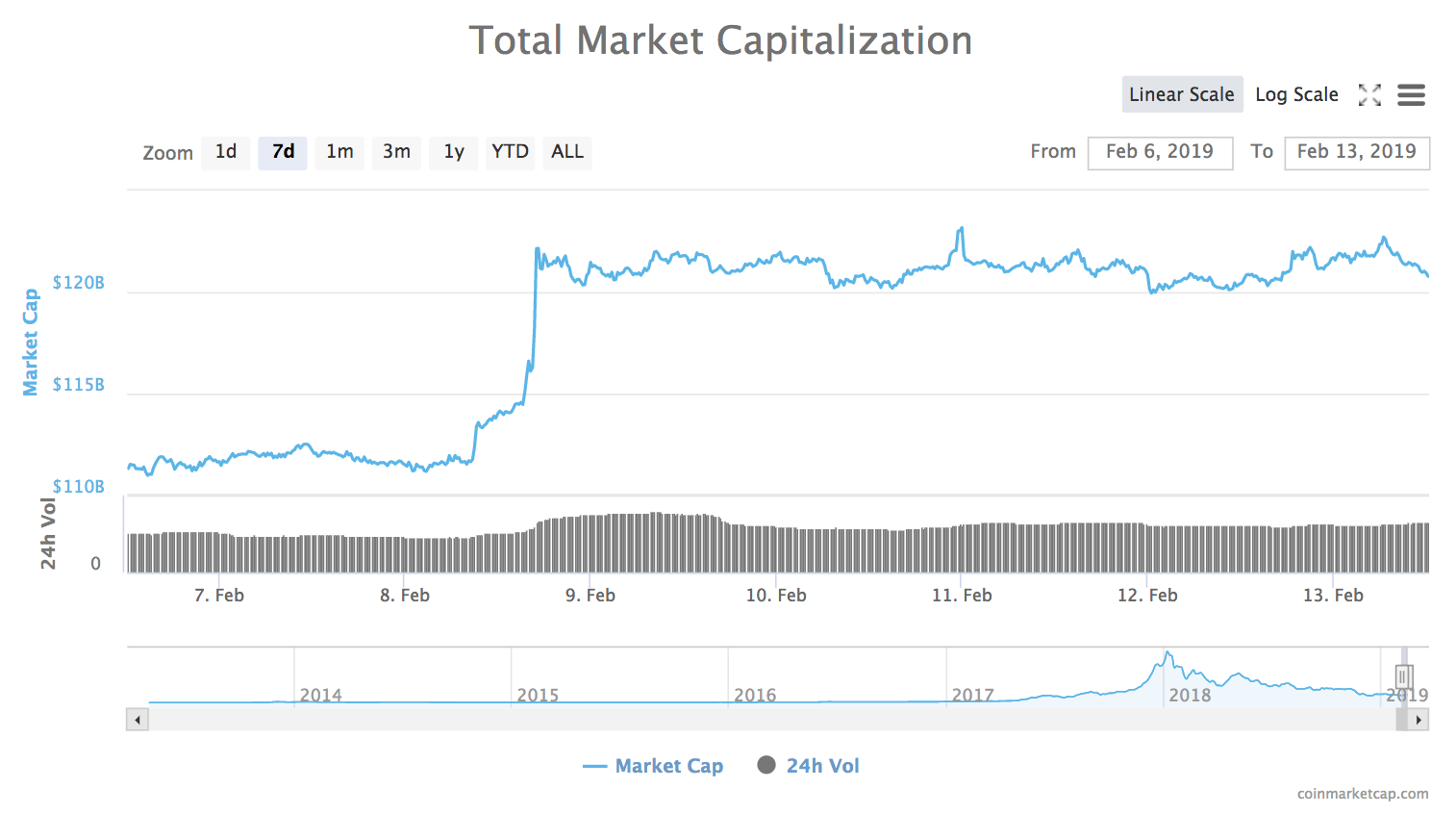 Reflecting on the difficulty of weathering the crypto bear market, a Bloomberg article today proposed that crypto investors and miners are increasingly turning to derivatives such as options as a means of pocketing cash short term.

In other media coverage of the crypto markets, Chinese alleged Bitcoin (BTC) billionaire Zhao Dong has this week stated his belief that an upturn — or crypto spring — will not come before 2020.

Stock markets are today seeing positive momentum, with the S&P 500 up 1.29 percent and Nasdaq up 1.46 percent. The CBOE Volatility Index (VIX) is down by around 0.45 percent.

Major oil futures and indexes are seeing green, with WTI Crude up 0.77 percent and Brent Crude up 0.72 percent. Mars US is up a stronger 0.99 percent, while the Canadian Crude Index has seen a round zero percentage change, according to oilprice.com.