Ethereum: This price resistance stands in the way of ETH hitting $500

Ethereum price soared above the $400 resistance recently, kickstarting what could be a powerful rally to $500.

As the price of Ethereumâ€™s native digital currency Ether (ETH) has been showing massive strength recently, the path seems to be continuing toward new highs. Ether price ran from $220 to $445 in the previous five weeks and this is one of the biggest surges for the altcoin in the past 18 months.Â

However, as the rally didnâ€™t provide many opportunities for laggards to hop on the train, is $500 the next target for Ether? Letâ€™s examine the technical setup.Â 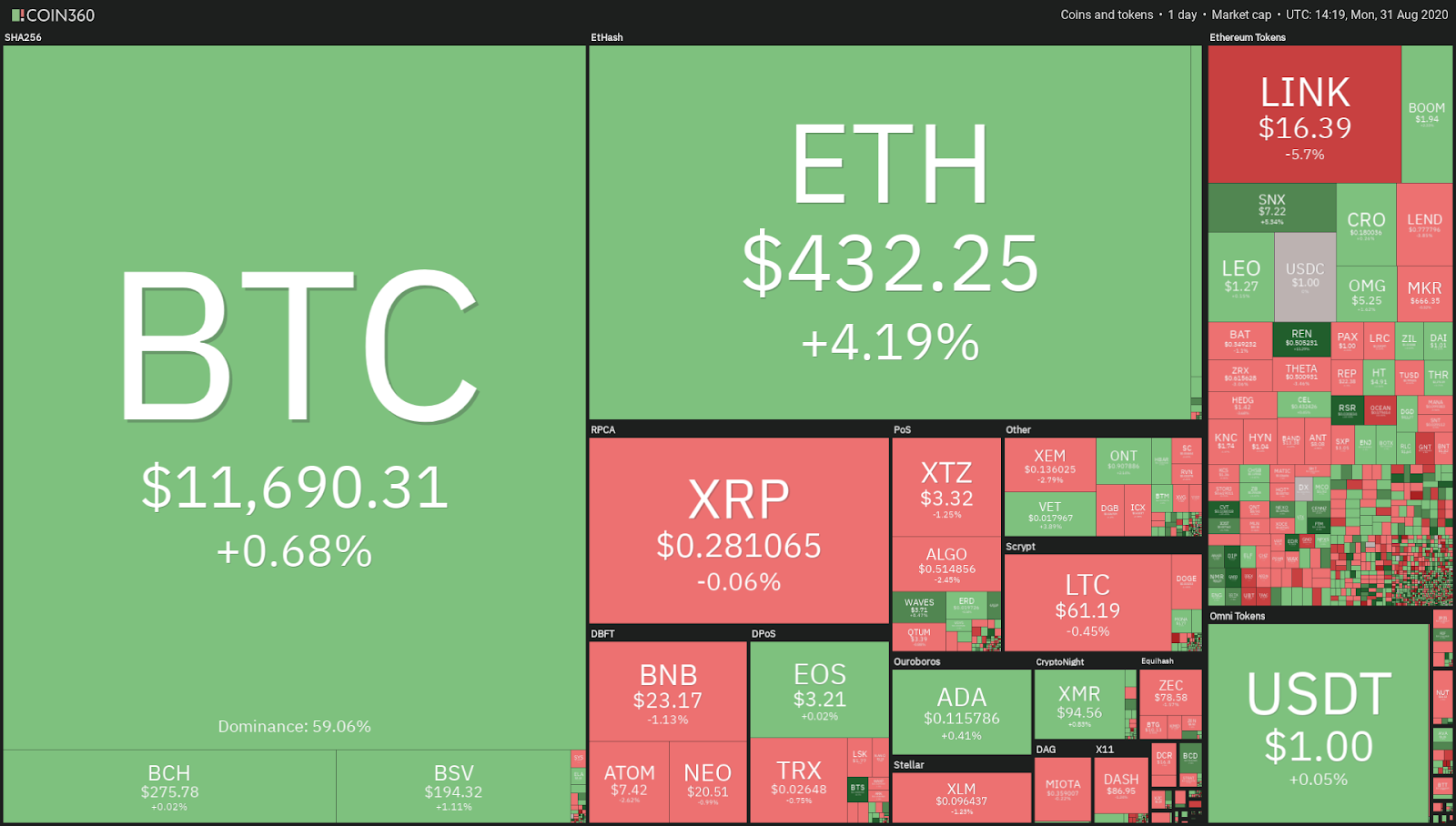 As Ether broke through the magical barrier of $340-360 as crucial resistance, it was crucial for the bulls to flip this area into a new support zone.Â 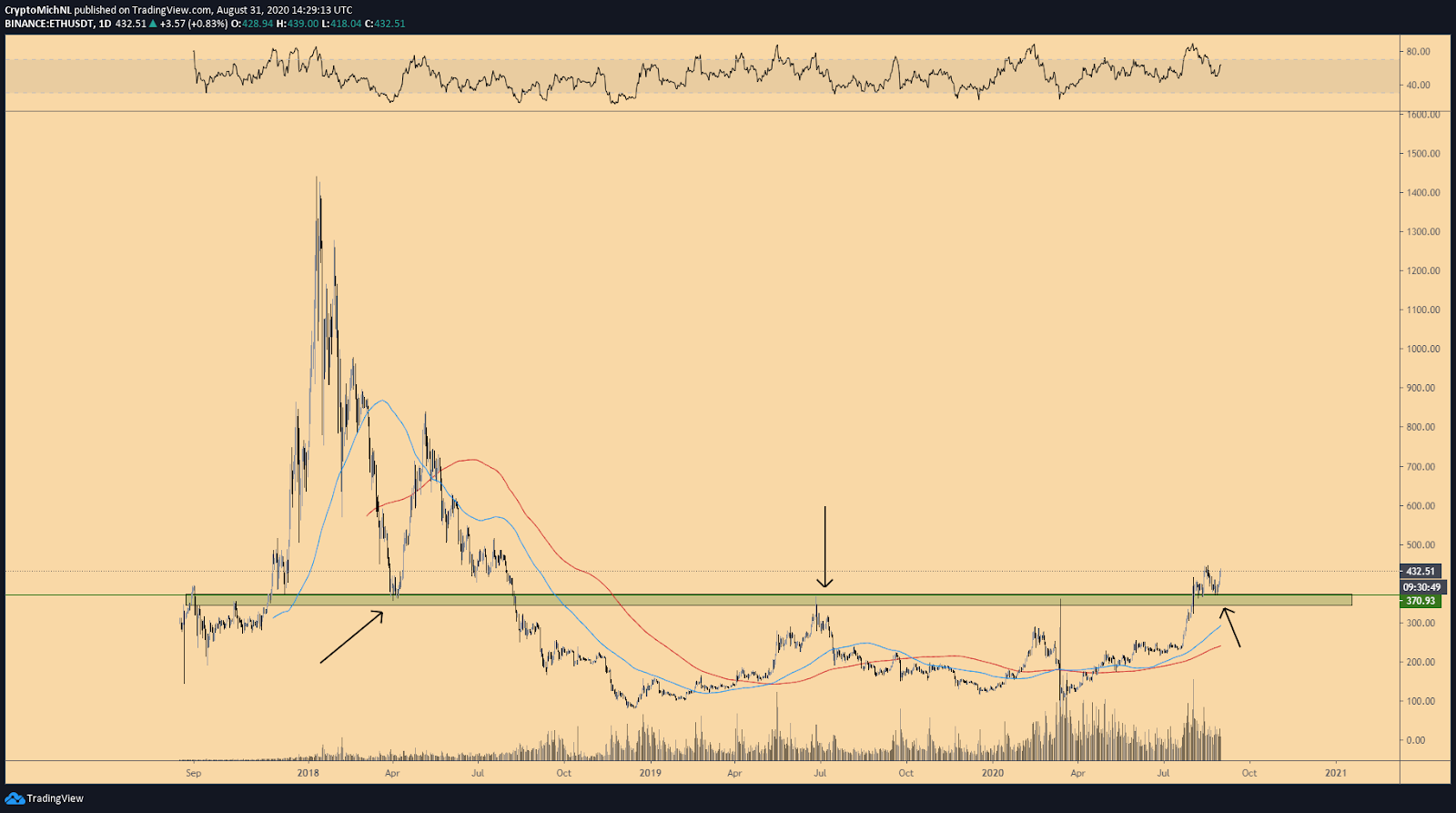 The chart proves this levelâ€™s significance, as the $340-$360 zone became support throughout the previous bull market. However, the breakdown in August 2018 led to a two-year accumulation range.

Similarly, a previous test at the $340-$360 range in July 2019 failed to break through this crucial resistance zone. Recently, a renewed breakout led to a breaker, as the chart confirms the support/resistance flip.

Next to that, Ether is rallying above the 100-day and 200-day moving averages, which are crucial for bullish momentum. As long as Ether sustains support above these moving averages, further bullish continuation is likely to expect.

The smaller timeframes signaled an apparent trend reversal, as the chart shows. 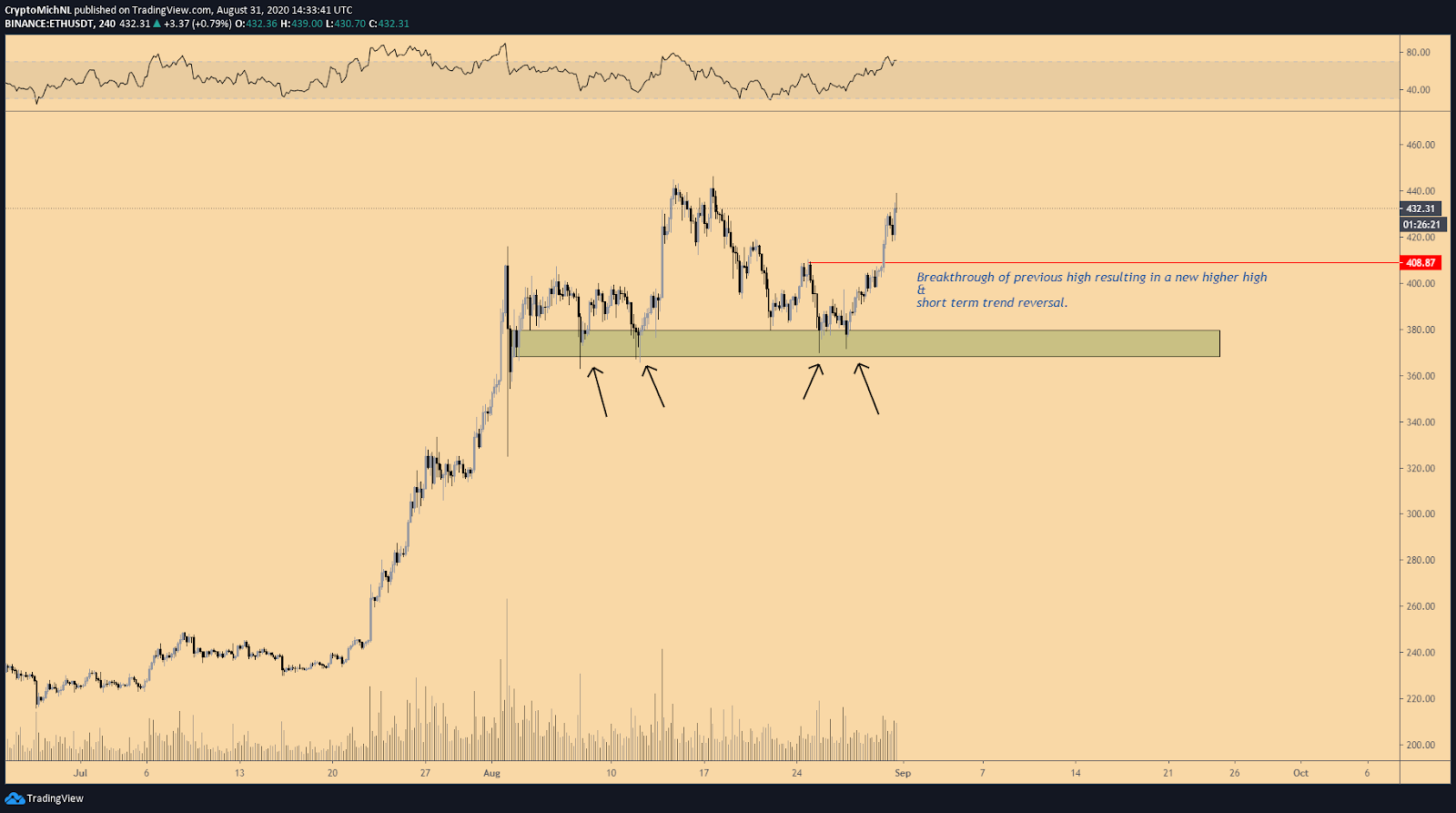 First of all, the crucial higher timeframe support zone between $340-$360 provided support once again.Â

As a trader, the next confirmation youâ€™d like to get is a new higher high, which was confirmed once the price of Ether broke through the high at $408 (the red line). This breakthrough led to a further surge of the price, which is almost a new yearly high.Â

The bullish scenario for Ether 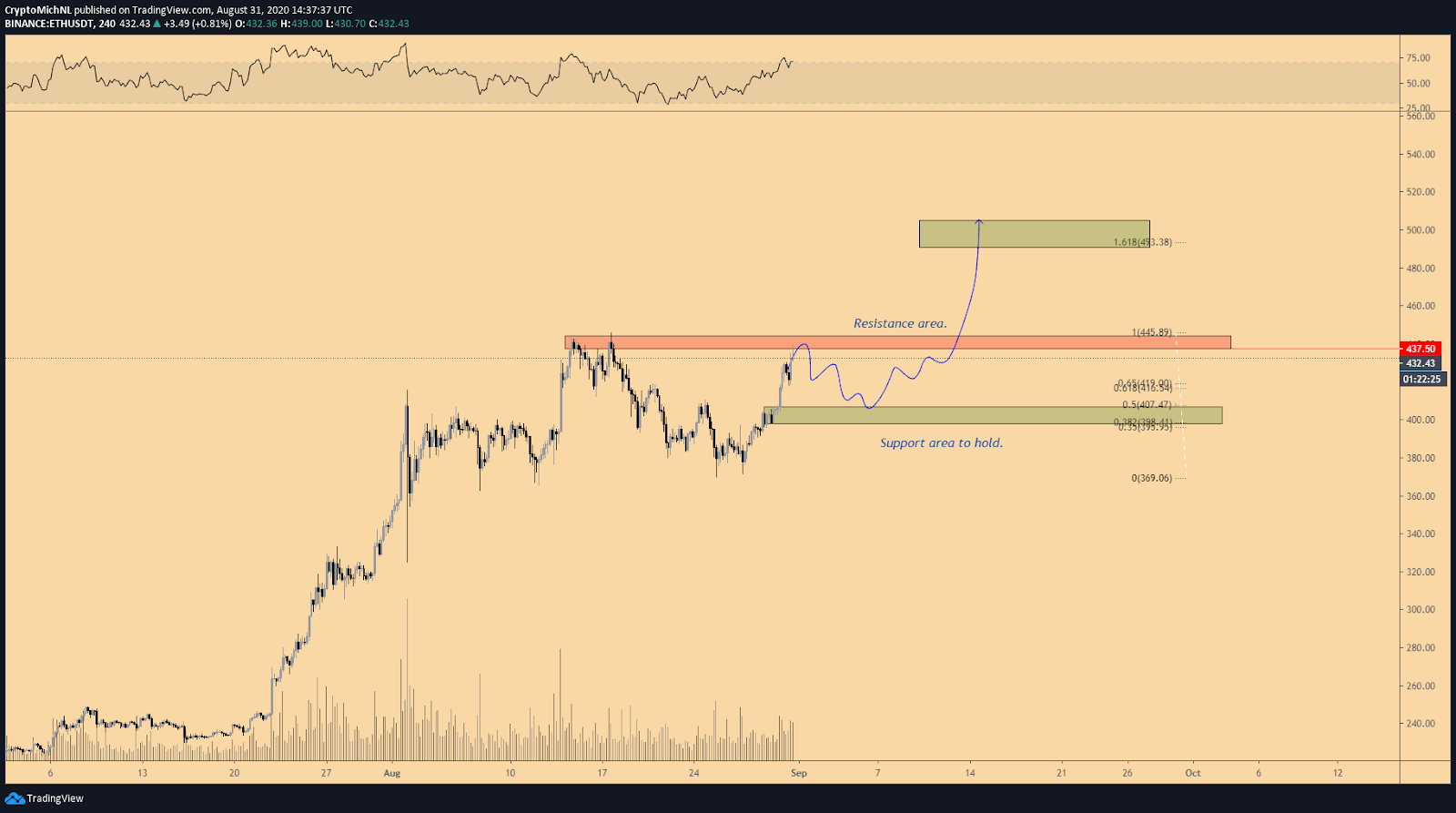 The price of Ether is currently fighting the final hurdle before new highs. If that happens, a renewed rally towards $500 is very likely to occur.

However, the crucial area to hold for ETH price can be found in the lower green box. As long as Ether sustains support at the $396-$410 area, further continuation is likely.

As a breakthrough in the recent high at $445 is crucial for continuation, the new targets can be defined through the Fibonacci extension tool.

Using this tool, a new target at $500 can be drawn and itâ€™s very likely to be hit once ETH breaks through the recent high.

The bearish scenario for Ether 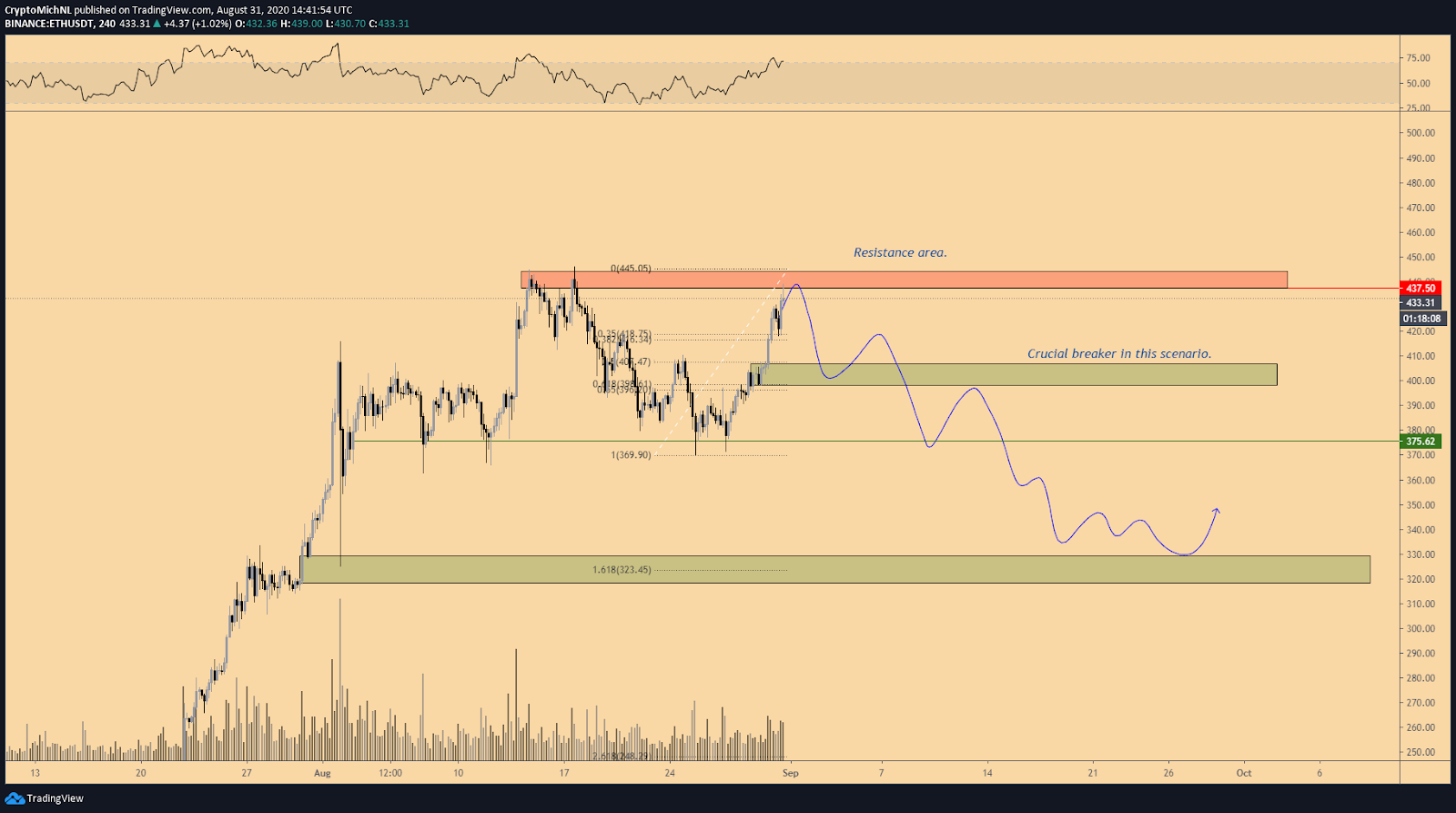 The same areas are also crucial in the bearish scenario. If the price of Ether rejects at the current resistance zone and fails to hold the $396-$408 area for support, a further decline is very likely to occur.Â

The targets for a downtrend structure can be defined using both the Fibonacci extension and price action. Itâ€™s very likely to expect a failure of the $360 support area if the price of Ether gets to that level again.Â

ShareTweet
Comments Off on Ethereum: This price resistance stands in the way of ETH hitting $500