The EU’s launch of an international blockchain association is a pivotal step in providing regulatory certainty for early adopters.

The European Union has officially launched the International Association of Trusted Blockchain Applications (INATBA) — with IBM, Accenture and Deutsche Telekom among the 100-plus members to have signed the association’s charter at a ceremony at the European Commission (EC) in Brussels on April 4.

INATBA was legally formed last month as an offshoot of the EU’s European Blockchain Partnership, with the explicit aim of “supporting interoperability, developing specifications, promoting standards and regulatory convergence to support the development and exploitation of innovative blockchain technologies.”

Hosted by European Commissioner Mariya Gabriel and EC Director-General Roberto Viola, the ceremony began with the hashing of the association’s charter to a variety of blockchains, including Iota‘s (one of many crypto-focused members of the association, in addition to Ripple, ConsenSys and the Sovrin Foundation).

It was then followed by a keynote speech given by Gabriel, who stressed not only the EU’s commitment to fostering the development of blockchain technology, but also the importance of blockchain in providing trust in an increasingly complex economy.

“In today’s economy, there is less and less time to build trust in the way it happened in the past. To fight cancer, to balance renewable energy, to trace the authenticity of goods, actors must be able to trust one another without meeting face-to-face. And how can we achieve this? Of course, with the help of blockchain.” 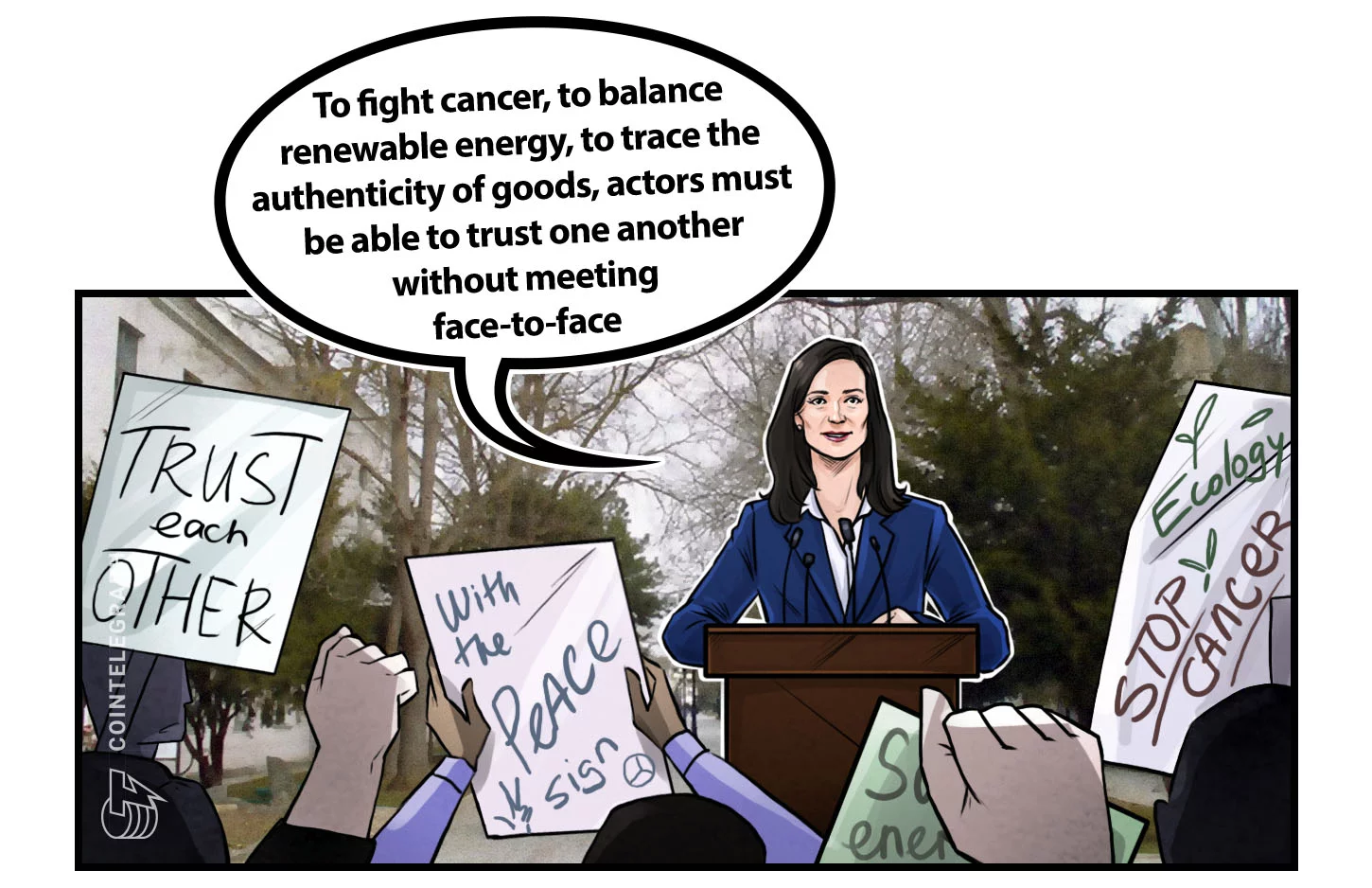 But in order to arrive at a world where blockchain-based platforms bridge the trust gap, more needs to be done to encourage the development of viable platforms, as well as the their standardization. This is precisely where INATBA enters the picture. It will aim to foster a legislative and regulative environment within Europe in which distributed ledger technology (DLT) can spread and evolve. As such, its declaration comprises four chief principles intended to support this objective, as outlined on its website:

As a whole, these goals have the overarching end of creating as much of a uniform framework for the development and deployment of blockchain technology as possible. By ensuring that standards converge throughout the EU and beyond, startups and organizations will benefit from greater certainty and clarity when pursuing DLT-related projects, something that could prove vital in encouraging greater adoption of blockchain.

“Developing a regulatory framework around distributed ledger and blockchain technologies is essential to their widespread adoption and growth,” said Dominik Schiener, a co-founder and co-chair of the Iota Foundation.

“The strength and size of this association, as well as the support of the European Commission and other governments, only further shows the future limitless potential for Distributed Ledger Technologies.”

The signing was followed by a panel discussion, which delved more deeply into this potential. Moderated by Gerard de Graaf — the EC’s Directorate‑General for Communications Networks, Content and Technology (DG CONNECT) — it saw representatives from the United Nations, Organization for Economic Cooperation and Development (OECD) and other organizations explore some of the ways they expect blockchain technology to help with their particular areas of operation.

“In the specific case of climate change, blockchain is relevant not only for mitigation, but also for adaption,” explained Massamba Thioye, the manager of the Sustainable Development Mechanism at the U.N. Framework Convention on Climate Change.

“For adaption, it can help enhance the resilience of supply chains, and this is extremely important. On mitigation, it opens a completely new area of action, particularly in the context of measurement of impact of climate action.”

Thioye wasn’t the only member of the panel to champion blockchain’s potential, with the U.N. World Food Program’s (WFP) Bernhard Kowatsch also talking approvingly of the WFP’s Building Blocks program for refugees in Jordan.

However, even if there was general agreement on blockchain’s potential, there were few concrete details on how exactly INATBA will achieve its aims of cultivating greater interoperability and standards. That said, there was, unsurprisingly, strong agreement that tackling the issues of interoperability, standardization and regulation is absolutely key if blockchain is to thrive, with a subsequent panel featuring INATBA board members acknowledging these issues directly.

“Some of the things that I think INATBA can help with is stopping the multiple proliferation and divergence of standards across different organizations in multiple jurisdictions,” said Paco Garcia of digital identity platform Yoti.

“I think INATBA can be that kind of force of convergence. Not only on a technology level, but also across different sectors vertically.”

INATBA is currently inviting other organizations interested in joining it to apply for membership, while Paco Garcia noted during the final panel that 48 additional organizations had applied for membership on the day of the association’s launch. This interest is encouraging, because — as Iota’s Julie Maupin noted during her contributions to the panel — the cooperative launch of INATBA compares starkly to “where we were a few years ago, where you couldn’t sit in a room with competitors in the space without people behaving badly.”

It’s for this kind of reason that the signing of INATBA’s charter stands as an important milestone in the blockchain industry’s evolution. Up until now, many companies and industries have flirted with the idea of integrating some kind of DLT, but it’s only now that an international organization with government backing has been formed in order to create a standardized context for the implementation of blockchain technologies. Given that blockchain generally operates in a way that transcends national boundaries, the EU’s involvement in the association is pivotal, since it will provide companies and organizations with the assurance that their use of blockchain will comply with relevant standards and regulations, irrespective of location.

Recent surveys have shown that companies have drawn away from blockchain adoption as a result of the lack of regulatory certainty. In June, a survey from EY found that “regulatory complexity is the greatest barrier to widespread blockchain adoption,” with 61% of “senior professionals” from a variety of industries identifying this as the biggest stumbling block. Similarly, a September study from Deloitte also concluded that regulatory problems “are another major barrier to blockchain adoption,” in addition to a “lack of standards and interoperability between various blockchain platforms and solutions.”

Interoperability, standards and regulation are all chief concerns for INATBA. So now that it has signed its charter and officially begun operations, it’s likely only a matter of time before it starts paving the way for more widespread blockchain adoption. Indeed, Julie Maupin affirmed that the association is already in dialogue with a number of government entities, with particular interest coming from Asia and North America (rather than just Europe).

As for the EU, INATBA isn’t the only means by which it’s seeking to influence and benefit from the development of blockchain technology. Back in February 2018, the European Commission launched the Blockchain Observatory and Forum, a network and set of working groups for developing expertise in DLTs, building European engagement with blockchain, and for supporting organizations working with the technology. A couple of months later, the EU then formed the European Blockchain Partnership, which was signed by 27 European Economic Area (EEA) member states with the aim of establishing a European Blockchain Services Infrastructure (EBSI) capable of delivering cross-border digital services.

It was out of such momentum that the idea for INATBA was conceived, with the establishment of the association being announced following a one-off EU Blockchain Roundtable on Nov. 20, 2018, which featured many of the startups and organizations that have now gone on to form INATBA. Speaking during the event, Roberto Viola provided further confirmation that the association would aim to become the go-to authority on blockchain tech in Europe and elsewhere:

“What makes this association special is its focus on promoting trust in blockchain technology among public authorities and citizens. This association can also now become a natural interlocutor for all the regulators at EU and national level, for instance on standards and regulation. It will also be able to communicate with citizens about blockchain, a technology which should not be associated with obscure cryptocurrencies but with transparency traceability and a secure environment.”

But if the EU is aiming to promote and shape the standardization of blockchain tech, observers may wonder where that leaves the wider cryptocurrency community, particularly with regard to more decentralized cryptos like Bitcoin. Talk of cryptocurrencies was conspicuously absent during the launch of INATBA — while, in the past, European officials have made numerous statements that indicate an ambivalence or even antipathy toward the likes of Bitcoin.

For example, in February last year, the European Central Bank’s Yves Mersch said that cryptocurrencies risk the “contagion and contamination of the existing financial system,” while, in February of this year, the chairman of the European Securities and Markets Authority (ESMA) said that, with regard to cryptocurrencies, “we are concerned that the absence of applicable financial rules leaves consumers exposed to substantial risks.”

In light of such statements, the fact that the EU is currently considering specific regulation for digital assets would suggest that it wants to tame cryptocurrencies, making them supportive rather than disruptive of existing financial structures. And even if the formation of INATBA is undoubtedly a significant achievement for the industry, it’s also tempting to suggest that, working under the auspices of the European Commission, the newly launched association will end up doing something similar for blockchain.