New report reveals more details about one of the most anticipated projects in crypto, the TON blockchain.

A new report on the Telegram Open Network (TON) by Russian research agency Aton — published today, June 14, on Cointelegraph — reveals new details about one of the most anticipated projects in the crypto space.

TON is a blockchain platform developed by encrypted instant messaging service Telegram, which is widely regarded as one of the primary means of communication within the blockchain and crypto community.

The blockchain network reportedly aims to gain wide usage due to the active, crypto-friendly Telegram community. According to the report, TON will facilitate internal payments, host decentralized applications (DApps) and provide wallet services, among other things.

Telegram and its TON project

Telegram was developed by Pavel Durov, a Russian entrepreneur, and his brother Nikolai, a prominent computer scientist. The brothers earlier created VK.com, one of the largest social networks in Eastern Europe. Eventually, they fled their home country to become citizens of Saint Kitts and Nevis, an island country in the West Indies.

TON famously saw one of the biggest — albeit private — initial coin offerings (ICO) in the crypto industry. In 2018, Telegram raised almost $1.7 billion in two private token sale rounds. It is second only to EOS’ record-breaking $4 billion ICO — however, it is worth noting that TON’s offering wasn’t extended to the public due to evident regulatory complications.

According to rumors in Russian media, local billionaire and former owner of Chelsea football club Roman Abramovich might have invested in the project. Nevertheless, only two native entrepreneurs — the co-founder of payment service Qiwi, Sergei Solonin, and the co-founder of dairy giant Wimm-Bill-Dann, David Yakobashvili — have publicly confirmed their backing so far.

As per TON’s white paper, which was reportedly distributed among investors around January 2018, the platform will be much more scalable compared to Bitcoin and Ethereum, which will allow it to compete with giants Visa and Mastercard in terms of transaction speed.

To achieve such levels of scalability, TON purportedly relies on built-in support for sharding, a process that allows the splitting and merging of blockchains automatically to streamline transactions under increased loads.

Additionally, TON employs a technology called “instant hypercube routing,” as per the recent report, which also “aims to ensure that transactions are processed swiftly notwithstanding the size of the system.”

According to the white paper, Telegram’s blockchain network is a proof-of-stake (PoS), multi-blockchain system consisting of a masterchain and up to 292 accompanying blockchains. Essentially, this means that TON relies on validators (“miners” who are responsible for verifying transactions in the PoS model) and their economic stake in the network. Basically, after putting down a certain sum of cryptocurrency as a deposit, validators get rewarded by receiving transaction fees.

TON’s in-house cryptocurrency is called gram. According to information presented in Aton’s research, the total supply of gram tokens “will initially be around 5 billion,” while the expected inflation rate is set at 2%, meaning that the total supply of grams will double to 10 billion in 35 years. The projection for the number of tokens in circulation all the way to 2028 can be seen below: 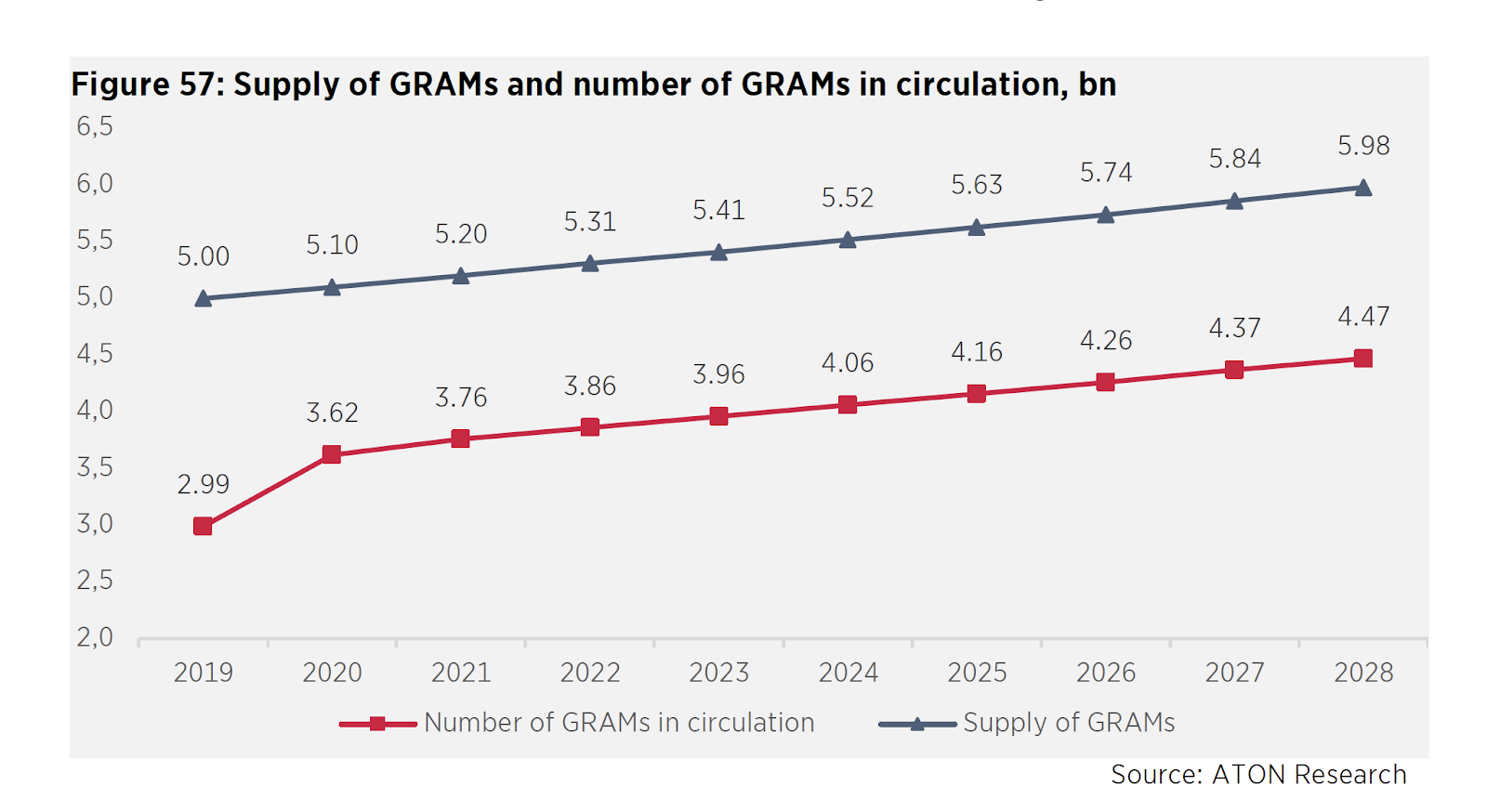 Further, according to Aton’s estimations, 200 million gram tokens are locked up by developers and 500 million gram are used as an incentive for the ecosystem, constituting 4% and 10% of the total supply respectively, as shown in the table below:

Since the gram token is not being traded publicly, it is difficult to estimate its true price. According to public sources, cited by Aton, during the second private funding round, the average price of gram was $1.33.

Estimates of what gram tokens may cost in the future also vary, but are believed to be in the region of $2.10 – $8.00, the research claims.

While the official trading of gram has not been launched by Telegram, a United Kingdom-based cryptocurrency exchange Xena Exchange is quoting nondeliverable gram futures (XGRAM), expiring at the launch of the token or in February 2020, at around $5.90 per XGRAM. The futures have so far been trading in the region of $1.8-$2.4 per gram, which is very close to the estimated valuation $2.2 for a token ahead of the possible Stage B sale.

Similarly, another cryptocurrency exchange, Liquid has announced that it will be launching a sale of gram tokens starting on July 10. A source close to Telegram told Cointelegraph that the messaging service is in no way collaborating with Liquid on their sale.

According to the Aton paper, the TON network is comprised of the following components:

TON Storage is described as “the file-storage technology available for storing arbitrary files with torrent-like access technology and smart contracts used to enforce availability.” The feature will reportedly be used by DApps that require large amounts of storage.

TON Proxy is the network’s anonymizer that will be used to hide the identity and create a decentralized virtual private network (VPN) to secure online privacy. The ultimate goal is “to guarantee to any service including Telegram immunity to censorship,” the paper mentions.

TON Services is presented as a platform for third-party DApps, smart contracts and a decentralized browsing experience.

TON DNS is a service that will reportedly “allow users to access decentralized services as easily as browsing the World Wide Web” by assigning accounts with human-readable names.

TON Payments will allegedly support instant off-chain payments inside the network. It also features built-in safeguards that aim to provide security when making transfers, making sure that these transfers are “as secure as any on-chain transaction.”

TON Virtual Machine is described as a component that processes smart contracts on the network.

According to the Aton paper, TON’s chief competitive advantage is Telegram’s ecosystem, which could offer simple ways to buy gram tokens and provide a range of services to spend them on to a vast audience, part of which cryptocurrency enthusiasts already comprise.

Indeed, as per the research, the messenger has amassed around 250 million active users, all of which might be introduced to TON as soon as the platform is ready.

Moreover, TON wallets will reportedly be built into Telegram mobile and desktop clients, with millions of users being able to store their funds in TON’s network when it goes live. The report states:

“Integrated with Telegram apps, the TON wallet may become the world’s most adopted cryptocurrency wallet according to its creators.”

Further, while Telegram is allegedly considering an option to allow compatibility with other major existing cryptocurrency wallet custodians, gram is reported as the primary means of transacting.

Telegram’s ecosystem, in turn, which supports bots as well as other popular features like group chats and channels, could represent “a ready market for paid content and subscription services as well as physical goods,” the paper’s authors argue.

The report mentions regulatory uncertainty as the main potential problem for TON’s adoption. In many jurisdictions across the world, crypto tokens are not defined or their definition is unclear, which makes it difficult to predict how different countries might approach crypto-related projects in the near future.

“Telegram and TON Issuer Inc, the wholly owned subsidiary that Telegram formed to act as the issuer in the token sale, may stop distributing GRAMs, discontinue the development of the TON Blockchain, or terminate operations in a jurisdiction should governmental or other actions make this distribution, development and/or operations unlawful or commercially undesirable.”

In October 2018, the government of Iran stepped up its restrictions on the messaging app, declaring that any cooperation with the app to launch its gram token would be considered an act against national security and a disruption to the local economy. Iran has been applying a spate of bans against Telegram since April 2018, however the messenger reportedly still works in the country.

The app has also been blocked in Russia — the Durov brothers’ birthplace — since April 2018, officially due to Pavel’s refusal to share the app’s encryption keys with local regulators. Despite the government’s active efforts to block the messenger, however, Telegram still operates in Russia due to internal VPN plug-ins, although with occasional outages. 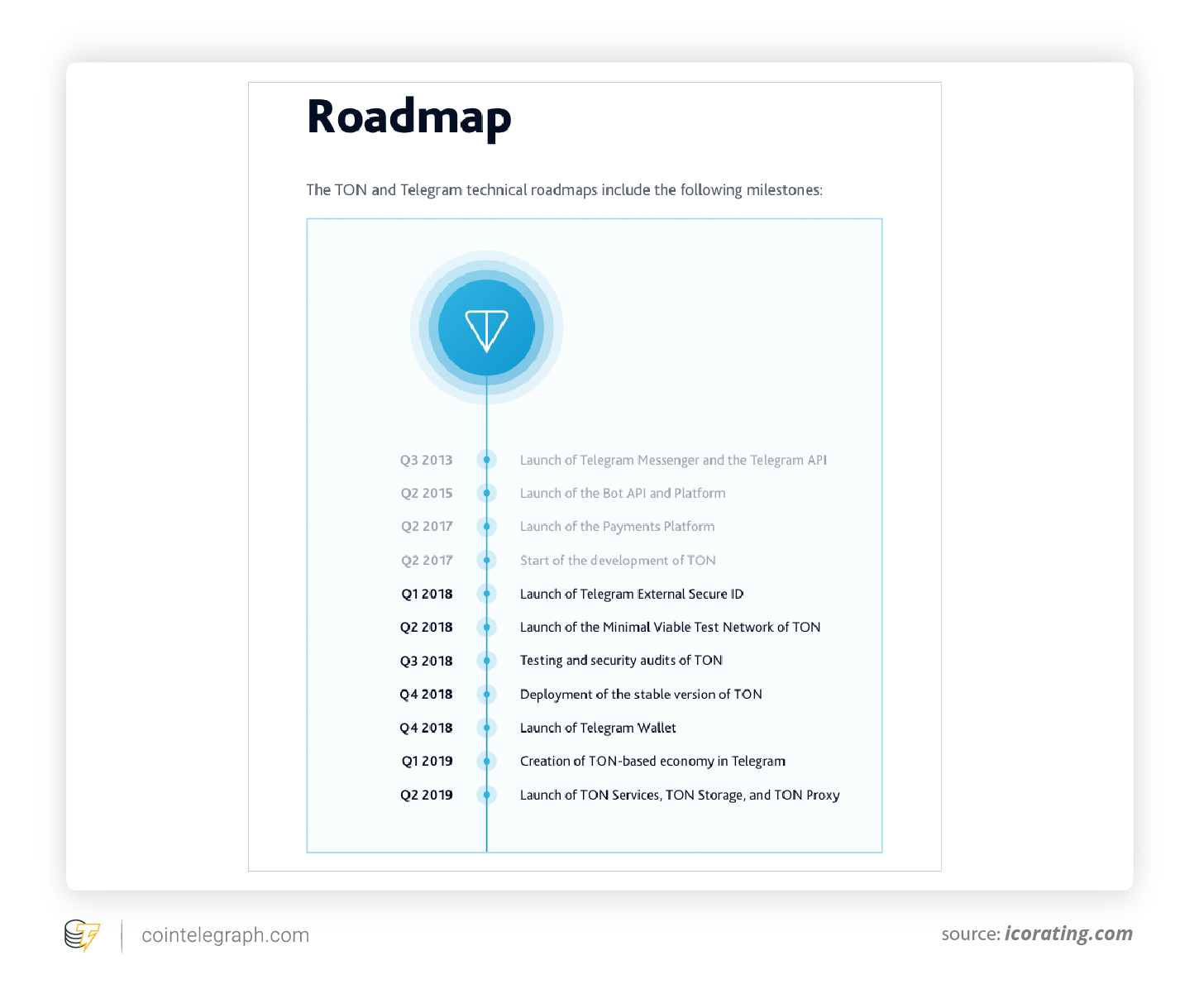 As mentioned above, in the fall of 2018, it was revealed that TON was 70% ready, with the TON Virtual Machine 95% prepared.

In April 2019, Russian business newspaper Vedomosti reported that Telegram had granted access to the TON beta version to a limited number of developers internationally. The article mentioned that testing may take from three-to-four months to half a year, meaning that TON could be released in the second half of 2019.

In May, Telegram officially released a test client for TON.

Earlier in May 2019, crypto news site The Block reported that Telegram will supposedly launch its TON project in the third quarter of 2019, citing an internal memo sent to investors.

Specifically, in the memo, Telegram purportedly said that a recent successful test process “reaffirms our belief that the TON virtual machine and the TON … Byzantine consensus algorithm are capable of meeting the goals stated in the original white paper.”

“We are planning to launch the platform in full force in Q3 2019. The exact date depends on how the testing goes,” according to a letter containing updates that was published in May 2019.