The rapid breakout of a theory linking Iran to Bitcoin price rises continues to circulate, but not everyone considers the two phenomena to be linked.

Bitcoin (BTC) benefiting from the Iran crisis has captured the imagination of internet users worldwide, with its Google search popularity up almost 5,000%.

According to data from Google Trends, the search term “Bitcoin Iran” surged 4,450% in the seven days to Jan. 8.

The term “Bitcoin” itself also saw a significant uptick around the globe, reaching a normalized score of 100 on Wednesday versus 40 a week ago.

Nigeria topped the list for both terms’ most frequent country of origin. Canada, Singapore and the United States also generated significant interest for “Bitcoin Iran.” 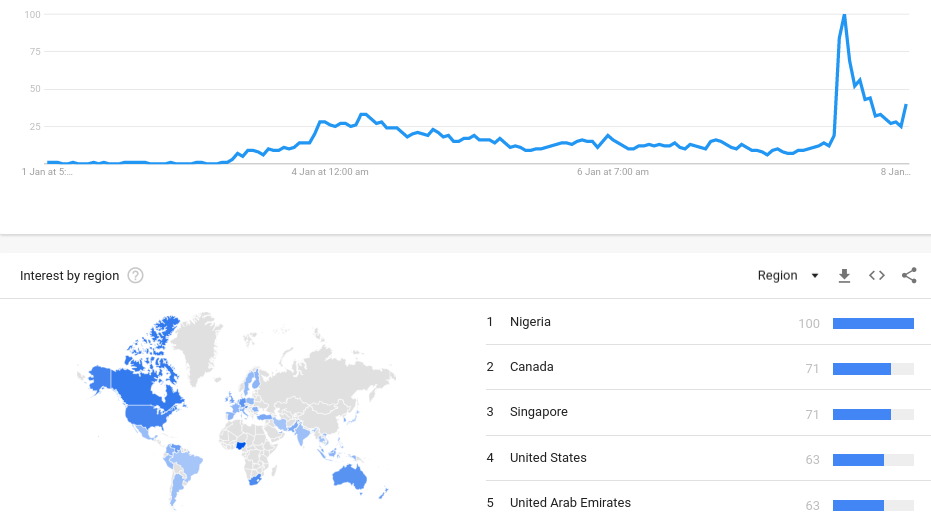 Others were less convinced, claiming the connection was, in fact, a fictional narrative that could nonetheless become a self-fulfilling prophecy as it went mainstream.

Su Zhu, CEO at Three Arrows Capital, highlighted an article in Nikkei Asian Review as proof non-crypto sources were buying into the idea.

The publication claimed Iran was “triggering a surge in cryptocurrencies.” A tweet read:

The article conversely quoted an exchange source who poured cold water on the idea.

“For Bitcoin, though, investors feel they can safely put a portion of their funds into it and hold it for the longer term without having to worry about any reversion to a mean, as it is not inherently linked to U.S.-Iran tensions,” Sheel Kohli, chief marketing officer at AAX said.

Last week, reports emerged of Bitcoin trading at a giant premium in Iran, with a single coin worth $24,000 according to the so-called “official” rial exchange rate. In reality, as sources noted, such a rate is all but fictional given its value compared to the ubiquitous black market.