Interest in Grayscale Crypto Products Not Easing Up, Not Just BTC Now

Grayscale Investments, the largest digital asset management firm in the world, has been showing exponential increases in investment to its cryptocurrency products. The total sum of assets under management grew by $1 billion in less than two weeks in July, as a Twitter update showed. Additionally, according to the latest documentation, the number of shares Grayscale issued between the first and second quarters of 2020 increased by 90%.

Considering that in its Q2 update, the firm revealed it had gathered around $900 million throughout the entire quarter, the interest in Grayscaleâ€™s products seems to be growing at an exponential rate. At the time, the firm held over $5.2 billion worth of cryptocurrency collectively, with Bitcoin leading at $4.4 billion. In total, the firm received $1.4 billion in the first half of 2020. 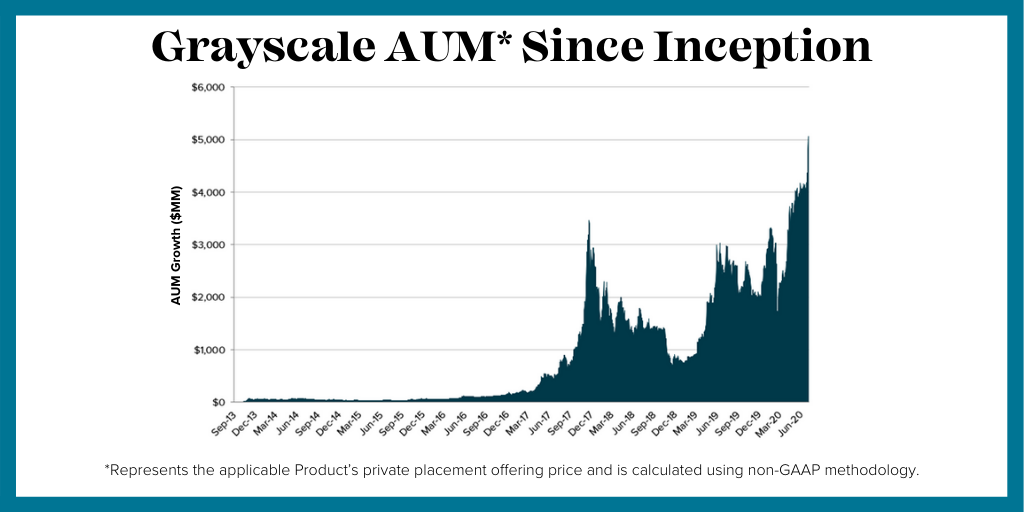 The levels of investment in the Grayscale funds are also exceeding those of late 2017, despite the Bitcoin price not being nearly as high. This is generally thought to be one of the best indicators for institutional interest in digital assets, given that no Bitcoin Exchange Traded Fund has been approved so far.

Demand not just for Bitcoin

While Bitcoin is by far the most popular product in the Grayscale family of investment products, other assets have also grown significantly, with Ether (ETH) being the second-biggest gainer. Grayscale has also recently filed a Registration Statement on Form 10 with the United States Securities and Exchange Commission for the Grayscale Ethereum Trust, designating it a SEC reporting company if validated.Â

This shows a growing institutional demand for Ether, which is also signaled by growing derivatives volume. This interest is likely powered by the growing activity in the decentralized finance sector and stablecoins.

â€œIn the first half of 2020, Grayscale saw $1.4B in capital invested into the private placements of its family of products. Demand for alt-coins on the rise Demand for products ex-Grayscale Bitcoin Trust is up 35% Q-over-Q and 81% of returning institutional investors in 2Q20 have now allocated to multiple products (an increase of 71% over T12M).â€�

Shares of Bitcoin Cash and Litecoin are the fifth and sixth public offerings from Grayscale and have recently received permission from the U.S. Financial Industry Regulatory Authority to make both funds available for public OTC trading.

While Grayscaleâ€™s inflows are certainly a sign of institutional interest, also backed by other data sets like CMEâ€™s Bitcoin futures Open Interest, some worry these inflows may be exacerbated by accredited investors taking advantage of the premium between the underlying asset and the fundâ€™s share price. Michael Sonnenshein, managing director at Grayscale recently confirmed that accredited investors can still purchase GBTC at the price of Bitcoin:

â€œThose asking… YES, the Grayscale #Bitcoin Trust private placement is available for eligible accredited investors to purchase shares at the Trustâ€™s daily NAV. We accept investments in both cash and $BTC.â€�

According to Grayscaleâ€™s latest filing with the U.S. Security and Exchange Commission, the number of shares sold increased 90% from the first quarter of the year to the second, which equates to the fund issuing over 87 million shares.Â Â Â

Itâ€™s also worth noting that Grayscale shares are traded at a premium that fluctuates, and in July, it reportedly decreased to 10%. According to crypto technology company Amun AG, investors (likely retail) have bought Grayscale Bitcoin Trust shares over the last year at a market price 22% above its net asset value on average. Therefore, dips in the premium could have invited arbitrage traders to step in and purchase the shares, suggesting another reason why Grayscaleâ€™s products are in high demand.

Lanre Jonathan Ige, a researcher at Amun AG, told Cointelegraph that the premiums exist â€œdue to the lack of the ability to create shares on a daily basis (or redeem shares) like in the case of ETPs/ETFs.â€� He added:

â€œThereâ€™s untapped demand for Bitcoin in the US market from those with tax-advantaged accounts like retirement accounts whose only option in BTC (some may not properly even understand the drastic premium for GBTC) so they maintain the demand for GBTC which boosts the premium. Smart investors are able to (of sorts) generate yields equal to the GBTC premium with knowledge the premium is unlikely to fall; or even hedge GBTC exposure by also shorting GBTC when theyâ€™ve created new shares.â€�

Nevertheless, the exponential growth for institutional money flowing into Bitcoin and other digital assets can also be observed through other metrics, namely through the derivatives activity in the CME and Bakkt futures markets â€” both of which have recently posted record numbers both in open interest and volume.

Other options for institutional investors are also emerging everywhere. Lanre Jonathan Ige told Cointelegraph that the lack of viable options is one of the reasons for the aforementioned premiums, but new options are starting to appear:

â€œPeople donâ€™t buy the native asset because many less sophisticated investors arenâ€™t familiar with Coinbase/Kraken and want to invest through brokers they understand and keep the rest of their wealth in. GBTC can be accessed through some brokers that have access to the OTCQX market. Buying Bitcoin through such a wrapper would allow an investor to benefit from many tax advantages in the same way investing in 21Sharesâ€™ suite of ETPs likely would.â€�

As Bitcoin continues to establish itself in the public eye as a more reliable asset class, awareness seems to be paying off. Grayscale fosters education for institutions by promoting Bitcoin to financial advisors along with many other strategies. Similarly, Fidelity has also dubbed Bitcoin as an insurance plan for economic turmoil, and Goldman Sachs recently stated that the Bitcoin price may rise alongside goldâ€™s as demand for viable stores of value grows.

Not only is Grayscale promoting crypto education to financial advisors, it is also trying to bring crypto awareness to the masses, having recently debuted an advertising campaign on CNBC, MSNBC, FOX and FOX Business in order to â€œbrrring crypto to the masses.â€� The 30-second video ad, however, received heavy criticism from some in the Bitcoin community for not mentioning Bitcoin and focusing too much on the history of money rather than digital assets. Furthermore, some also criticized the mentioning of controversial forks like Ethereum Classic and Bitcoin Cash and even the quality of the ad itself.

In the midst of the ongoing pandemic and a depreciating dollar, itâ€™s only a matter of time until we see a Bitcoin ETF that could be a real game changer for Bitcoin, according to Grayscaleâ€™s managing director, Michael Sonnenshein. For now, the closest thing to an ETF is the GBTC fund, which, if it were an ETF, it would be one of the most sought-after in the United States.

ShareTweet
Comments Off on Interest in Grayscale Crypto Products Not Easing Up, Not Just BTC Now