Crypto mining in Iran is set to become even bigger with the government giving the green light for power plants to mine cryptocurrencies like Bitcoin (BTC). The news is the latest piece of positive development on the virtual currency mining front to come out of the country in the last year.

Since legalizing crypto mining back in July 2019, Iranian authorities have sought to ensure market participants operate only after obtaining the required licenses. By allowing power plants to engage in cryptocurrency mining, Iran is joining other emerging hubs as the global â€œhash warsâ€� gathers pace.

Iran has seen an influx of miners because of its cheap electricity, catapulting the country to be one of the more significant crypto mining nations outside of China. Meanwhile, major market participants in North America are expanding their operations with multiple inventory acquisitions over the past few months.

Iranian authorities have given the go-ahead for power plants to mine cryptocurrency. However, the authorization comes with a caveat, as power plant operators cannot use subsidized fuel. Thus, Iranian power plants looking to mine Bitcoin must obtain a license from the government and use theÂ approved electricity tariffs determined by the authorities.Â

Not allowing power plants to use subsidized fuel is a measure taken by the government to ensure that such activities do not negatively impact the supply of electricity to residents as well as other industrial sectors in the country. Babak Behboudi, co-founder of digital asset trading platform SynchroBit Hybrid Exchange, told Cointelegraph that this news marks another milestone for legalized crypto mining in Iran:

â€œItâ€™s a great achievement as it indicated the Iranian government has recognized the crypto mining industry as a fact! It means that cryptocurrency can be considered as a legal and regulated asset by which people can do something for their business and life.â€�

Iranian authorities emphasizingÂ licensed crypto mining is not a new development. Indeed, as of January, the countryâ€™s Ministry of Industry, Mine and Trade has issued over 1,000 licenses for cryptocurrency mining. Before legalization, some miners moved their operations to mosques in order to enjoy free electricity, prompting a government crackdown due to spikes in energy consumption.

A compromise was soon found, with the government allowing crypto mining and even incentivizing more participants to move their operations to the country with the promise of tax holidays. Iranian cryptocurrency miners that repatriate their foreign earnings to the country are eligible for certain tax exemptions. As part of the campaign to only allow licensed crypto mining, the government has also offered rewards for whistleblowers whoÂ expose illegal cryptocurrency mining activities, with bounties of about 100 million rials ($2,375).

In May, Iranâ€™s president, Hassan Rouhani, called on officials at the Central Bank of Iran, Ministry of Energy, and Ministry of Communications and Information Technology toÂ develop a comprehensive national strategy for crypto mining. The move signaled greater intent by the government to include cryptocurrency mining in its economic recovery plans. With the country facing hyperinflation and a struggling economy made even worse by the coronavirus outbreak, the Iranian government has been increasingly examining the merits of greater involvement in the countryâ€™s crypto industry.

Along with Egypt, Kuwait and Myanmar, Iran has one of the lowest electricity rates in the world. Cheap electricity is often an incentive for miners with healthier bottom lines. Outside of China, Iran controls the fifth-largest share of global Bitcoin mining hash rate distribution. Indeed, Iranâ€™s rise in crypto mining activities in 2019 led to a slight decline in clean-energy crypto mining. 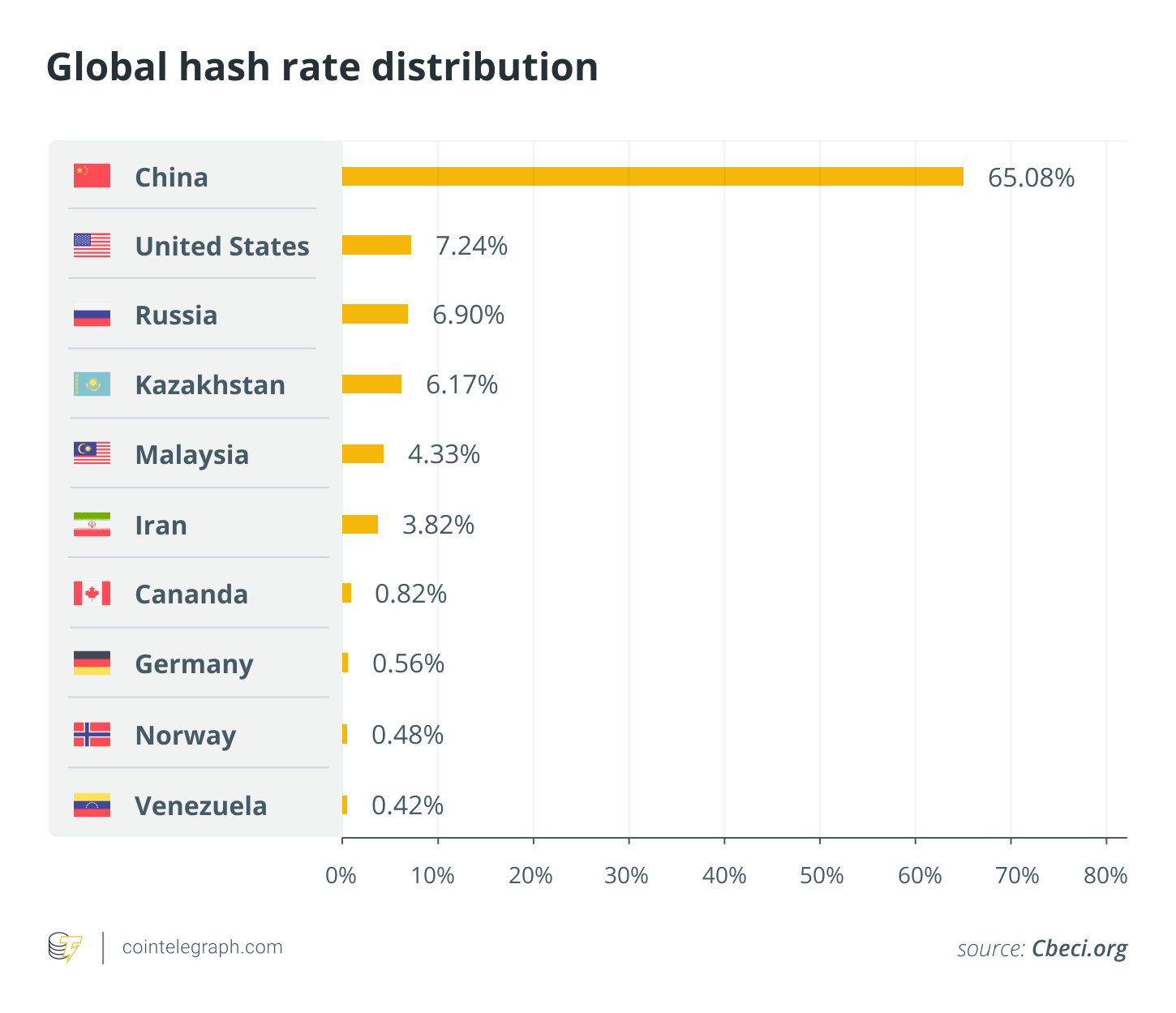 In the third edition of its biannual Bitcoin mining report back in June 2019, digital asset management firm CoinShares revealed thatÂ global renewable energy penetration in the industry stood at 74.1%. In its latest research findingsÂ published in December 2019, the proportion slightly decreased to 73%. Commenting on the possibility of Iran claiming an even larger share of the global Bitcoin mining market, Behboudi remarked that itâ€™s too early to say for sure:

â€œTo become a mining hub, the mining industry of Iran needs to have the access to the latest mining technologies, especially the advanced machines, to improve the efficiency of energy consumption and increasing the ROI of the investors. Moreover, we need to see how the government wants to set the roadmap for this new industry. A key issue is how the government wants to allow foreign companies and investors to participate in the crypto mining industry of Iran.â€�

Power plants in Iran engaging in crypto mining might increase the countryâ€™s Bitcoin mining footprint, resulting in a larger share of the global hash rate distribution. As of August 2019, Iran ranked ninth in the world in thermal power generation capacity, with a rapid increase of 9,000 megawatts happening over a six-year period.

The news also comes as participants in other major crypto mining hubs appear to be upscaling their operations. Major North American miners like Bitfarms and Marathon have madeÂ sizable orders for mining rigs from major manufacturers like MicroBT and Bitmain in the past few months.

These new inventories contain the latest iterations of mining hardware touted as being able to deliver far greater levels of productivity than the older generation of rigs. Highly efficient crypto mining is even more of a concern in the present climate, especially after the May Bitcoin block reward halving.

In Kyrgyzstan, Bitcoin mining seems to be attracting government interest. Earlier in August, the countryâ€™s Ministry of Economy released for public discussion a draft plan to impose a tax rate of 15% on Bitcoin miners. The move is part of efforts by the government to stimulate economic recovery amid the current COVID-19 pandemic.

For Bitcoin permabulls, countries such as Iran will look to compete with the United States in a hash war. According to crypto bull Max Keiser, this tussle will catapult Bitcoin to a market price of $500,000. The migration of hash power from â€œEast to Westâ€� could cause a significant decrease in Chinaâ€™s Bitcoin mining hash rate dominance. Western miners moving away from Europeâ€™s high operating costs could relocate to North America where the U.S. is emerging as a viable option due to developments in regulation by a number of states.

For now, China still dominates the industry, controlling 65% of the hash rate. With the monsoon season underway in China, pundits expect miners to see even greater profitability as electricity becomes abundant.

In 2020, the industry has been forced to weather multiple storms including the COVID-19 pandemic, which has affected the supply of hardware to miners. Following the Bitcoin halving, the spot market price of BTC also failed to see any upward push, forcing smaller mining operations to shut down. Thomas Heller, global business director at Bitcoin mining pool operator F2Pool, revealed the effects of the halving to Cointelegraph:

â€œDaily mining revenue has dropped from ~$0.16 per TH/s pre-halving to $0.07 in July and is now around $0.10. Profit margins are much thinner and many old-gen machines have turned off, with the exception of those taking advantage of cheap Hydro Season power prices in China.â€�

Whit Gibbs, CEO of crypto mining firm Hashr8, echoed similar sentiments, telling Cointelegraph that the post-halving has been brutal: â€œObviously anytime you halve the block reward youâ€™re directly impacting a Minerâ€™s bottom line.â€� He continued: â€œAdd to that the fact that despite months of sideways price action there was also a steady increase in difficulty, it was not a nice few months for Bitcoin miners.â€� According to Heller, range-bound sideways accumulation also played a big part:

â€œDue to the BTC price, there has been much less demand for new-gen machines compared to 12 months earlier. A few companies in the U.S. and abroad have made very large orders from MicroBT and Bitmain, however, we arenâ€™t expecting huge increases in network hashrate due to the slowish sales.â€�