Is the Growing Correlation Between Bitcoin and Gold a Bullish Sign?

The correlation between Bitcoin and gold daily returns is increasing, leading investors to expect further upside from BTC price.

The correlation started to increase as gold broke through $1,900, nearing a new high before pulling back alongside Bitcoin.Â

The increase in correlation represents a trend shift as the relationship between the two had previously been falling according to data from Kraken exchange’s research team. 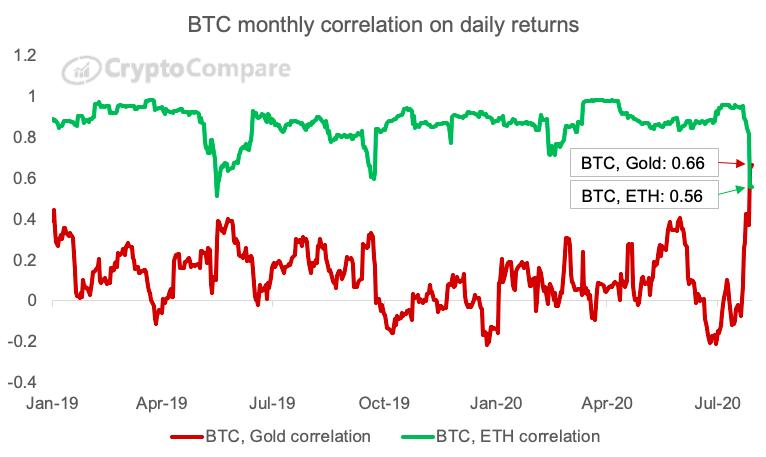 While the correlation between gold and Bitcoin has surged, Etherâ€™s (ETH) correlation with Bitcoin started to decrease around the same time and the figure now sits at 0.56.Â

â€œWith innovations and hype around DeFi, we started to see prices decouple within the crypto space. Ethereum is an enabler and we saw a much stronger gain over the last few weeks, alongside gains from other DeFi tokens.â€�

Is BTCâ€™s strong correlation to gold a bullish or bearish sign?

Often referred to as â€œdigital goldâ€�, Bitcoinâ€™s correlation with the precious metal may further cement its position as a store of value asset at a time when the U.S. Federal Reserve prepares to pass yet another coronavirus stimulus bill.Â

Li noted that while previous correlations between Bitcoin and gold led to surges in the BTC price, the context has certainly changed.Â

â€œLast time Bitcoin had a moderate correlation with gold (around 0.5) was towards the end of 2018. That was when a month earlier in November 2018 bitcoin suffered a 50% drop (at the height of the bitcoin cash war) and made some subsequent rebounds. Gold was recovering from a somewhat cyclical drop a couple of months earlier. The moderate correlation back then was perhaps a bit of a coincidence.â€�

As the dollar and the economy continue to struggle with the fallout of the COVID-19 pandemic, it seems likely that store of value assets like Bitcoin and gold will continue to be in high demand.

ShareTweet
Comments Off on Is the Growing Correlation Between Bitcoin and Gold a Bullish Sign?