While Japan’s new laws are welcoming for most crypto exchanges, as they expect more institutional investors, custodians and wallet makers are getting worried.

On May 31, the Japanese House of Representatives amended two cryptocurrency-related laws, the Payment Services Act and the Financial Instruments and Exchange Act, which will come into effect in April 2020.

Most Japanese crypto exchanges have welcomed the changes, since they expect more institutional investors to join the crypto industry. However, others voiced their concerns that the changes may bring some uncertainty to custodians and wallet service providers.

The two documents outline several specific changes, which can be discussed separately.

The new law revises the term “Virtual Currency” and says that “Crypto Asset” would be a better term to use to describe cryptocurrencies. The change was made since “crypto assets” is used more frequently at international meetings, such as the G-20. Meanwhile, the use of “virtual currency” may mislead the public into thinking that cryptocurrencies function or hold the same status that is associated with fiat currencies. This change, however, is not compulsory for implementation by exchanges and the media.

According to the documents, custodian service providers will now have to share the same level of accountablility for the risks as exchanges, such as the leakage of users’ crypto assets and money laundering/terrorism financing. So, custodians will need to be registered with the Financial Services Agency (FSA) even if they don’t provide crypto exchange or trading services.

As of now, there are no specific guidelines for cases that are not clear cut. However, the governing bodies are likely to release further information to clarify the situation.

Exchanges must change how they store crypto

From April 2020 onward, crypto exchanges operating in Japan will have to manage users’ money separately from their own cash flows. This means finding a third-party operator to keep hold of the users’ money (this can be a trust company or any other similar entity).

When managing users’ money, “reliable methods” will have to be used, such as a cold wallet. If the exchanges manage users’ stored cryptocurrencies in other ways, such as a hot wallet system, they have to hold “the same kind and the same quantities of crypto assets” as the users’ crypto assets. This would enable the exchange to reimburse users if the funds get stolen from the platform.

The revised laws still do not directly regulate anonymous cryptocurrencies or privacy coins such as monero and zcash. On March 15, the FSA said it would deal with problematic crypto assets that are easily used for money laundering because their transaction records are not traceable. Back then, the agency dubbed the anonymous coins as “problematic crypto assets.” However inclusion of anonymous coins in the bill eased the speculations regarding whether the FSA is indeed planning to regulate this area of the crypto sphere. Also, a recent report highlighted that money laundering in Japan is on the rise.

As Cointelegraph reported earlier, in May 2019, Japan has been working on some time to combat money laundering through anonymous coins and imposed inspections upon exchanges that offered these coins for trade to their user base.

More specifically, tokens issued under STOs can constitute ERTRs if the three requirements below are met, according to Japanese law firm Anderson Mori & Tomotsune:

“(i) Investors (i.e., right holders) invest or contribute cash or other assets to a business,

(ii) the cash or other assets contributed by investors are invested in the business, and

(iii) investors have the right to receive dividends of profits or assets generated from investments in the business.“

Notably, while ERTRs will be regulated under the FIEA, they are excluded from using the official term “crypto assets,” as per PSA guidelines.

From April 2020 onward, crypto asset derivatives transactions will be regulated under the FIEA. The law doesn’t specify margin rates, although the Japan Virtual Currency Exchange Association (JVCEA), a major self-regulatory organization in Japan, has a guideline that proposes to restrict margin rates by four times or even lower.

The Anderson Mori & Tomotsune report says that the JVCEA’s guidance “may be taken into account when specific provisions are promulgated by the relevant Cabinet Office Order.” It then goes on to suggest that the exact level may be decided upon in the future:

“Cabinet office orders determine how laws will be enforced in reality and something the Japanese crypto industry pays careful attention to after the amendment of the two laws on May 31st.”

Introducing a clear regulation on derivatives transactions may be urgent, since 80% of crypto trades comes from derivatives, and yet it is largely unregulated. Data from the Japan Virtual Currency Exchange Association (JVCEA) shows that the volume of leveraged, margin and futures trading for crypto was far higher than that of spot trading in Japan from April 2017 to March 2018. 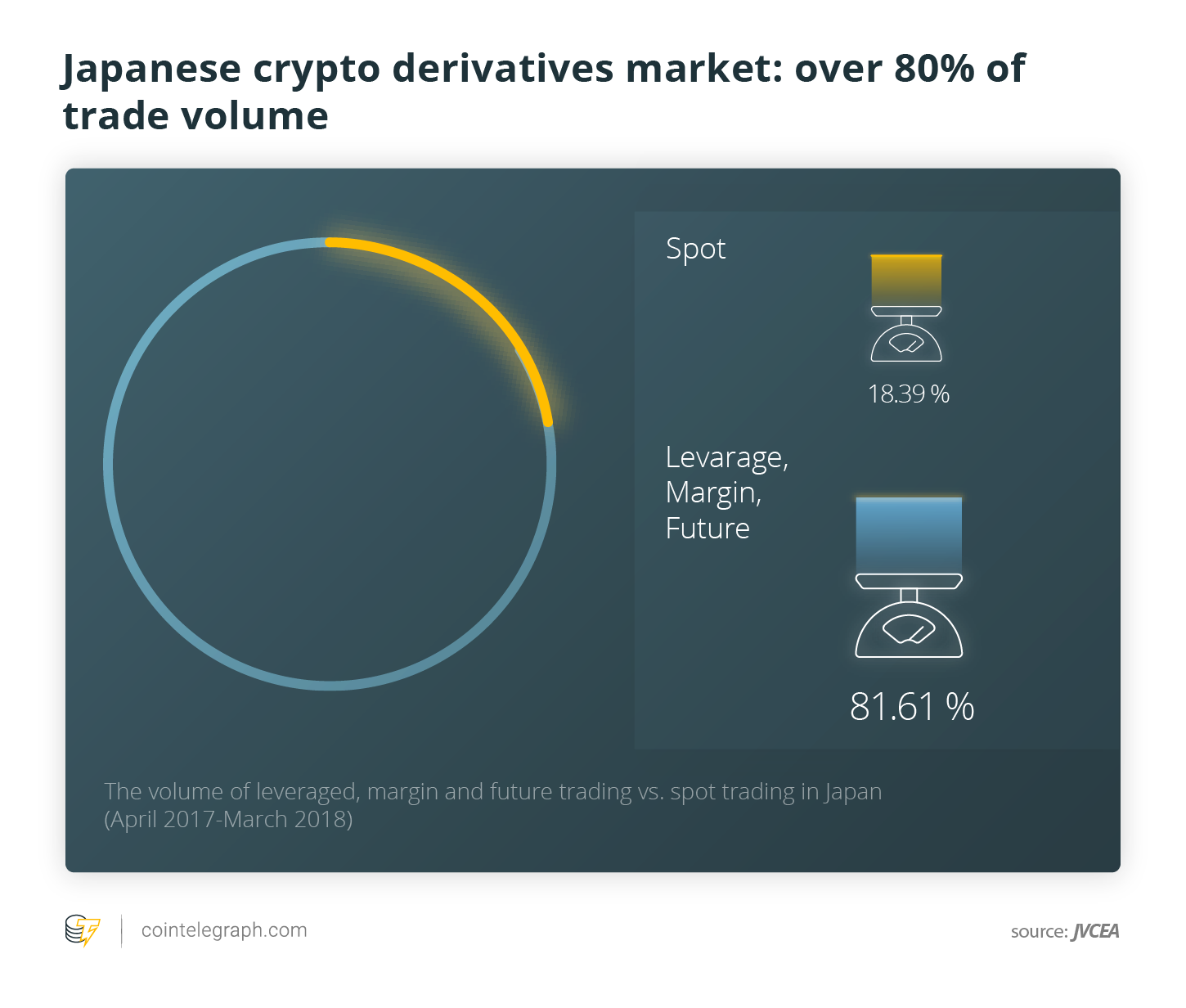 Anderson Mori & Tomotsune has set out the possible areas that may constitute a breach of law by the governing body:

(iv) engage in market manipulation through actual sales and purchases;

“Japan is leading the crypto regulation”

Most Japanese crypto exchanges that Cointelegraph Japan contacted have spoken positively about the new laws.

Katsuya Konno, head of the CEO office of fintech company Quoine, welcomes the changes and thinks that the revised laws will enhance customer protections and encourage more institutional investors to enter the crypto industry. According to a translation of his comments, he told Cointelegraph:

“I think it’s great, frankly. With the revised content, customer protection is further pursued, so I think that Japan will be able to become a world leader in virtual currency-related regulations, and the entry of institutional investors will also increase. As new initiatives such as STO are becoming possible, the boundaries between virtual currency and existing finance may be overlapping more and more.”

As reported, Quoine’s trading platform, Liquid, hit unicorn status with over a $1 billion valuation in April 2019.

BitPoint, another crypto exchange in Japan, has also praised the new laws. The exchange’s spokesperson told Cointelegraph, in translation:

BitPoint also expects more institutional investors to join the crypto movement and the market to expand further as crypto rules become clearer. However, the exchange has admitted that a review of the wallet management system will need to be undertaken in order to strike the right balance between security that entails the use of cold wallets and more user friendly, but less secure, hot wallets. BitPoint will therefore look to entrust fiat currencies to a trust company and receive a financial instruments business operator’s license.

Meanwhile, Coincheck, which just obtained an exchange license from the FSA in January, wrote in a translated email that the new laws are something it expected, also adding:

“By clarifying the target and standards of regulation through the current legal reform, we believe that it will lead to the healthy development of the cryptocurrency industry. On the other hand, there is also concern that the term change to crypto assets may be a setback for cryptocurrency as a means of payment. I would like to make an effort as an industry to make that not happen.”

The exchange has also said it would be closely monitoring the cabinet office orders that determine how the laws will be enforced in reality.

AndGo, a Japanese-made hardware and mobile wallet development company, outlined some “ambiguity” in the new laws when speaking to Cointelegraph Japan.

AndGo points out that there are two kinds of wallet makers. One is able to move clients’ assets. It will be viewed as a custodian wallet and required to be registered with the FSA, as in the case of exchanges. The other type doesn’t possess clients’ private keys, hence can’t move clients’ assets. The new law doesn’t apply for the latter type.

As AndGo explained the issue, its wallet is of the second type, so it should not be subject to the new laws. However, the laws are unclear about the cases in which it holds one of the private keys (as with multi-sig) and a private key that clients encrypts by setting up their own passwords. In those cases, wallet makers cannot move clients’ assets solely by their own volition. According to a translation of a correspondence with AndGo:

“The details and interpretation of this regulation are often vague, and I think that wallet operators will have to ask the FSA individually about gray areas in the future.”

However, AndGo understands that regulators don’t often catch up with the rapid pace of technological innovation, writing:

“While entrepreneurs develop their service products by looking years ahead, regulators focus on technologies and services that were released years ago.”

After attempting to get ahead with crypto regulation, Japan witnessed two major hacks in 2018. Protecting crypto customers and investors has become a priority, and those who have enough funds to comply with the regulation may be at an advantage. In contrast, it may become harder for crypto entrepreneurs to enter the industry. The FSA, in the comment to Cointelegraph Japan (translated into English), addressed some of the concerns, however:

Ahead of the enforcement day, the FSA is going to release government orders including a Cabinet Office Ordinance, which determines how the law will be enforced. At the same time, it will seek public comments on its website regarding the orders, one month before the implementation. It is not yet clear what the FSA will include in the government orders, but one of them is expected to be about the rate of margin trading.

Moreover, according to the FSA, many elements of Japan’s new laws are included in the recently published IOSCO’s document, which will be used in the upcoming G-20 meeting in a discussion surrounding crypto regulation. The FSA hopes to “share Japanese experiences with G20 members and deepen the mutual understanding.”