Four macro indicators suggest a Bitcoin uptrend is near, following nearly two months of stagnation in a tight range.

According to Skew, the volatility of Bitcoin has dropped to levels unseen since 2017. Researchers at Skew wrote: â€œ#bitcoin realized volatility on a three years low, Tesla is eating Bitcoinâ€™s lunch!â€� 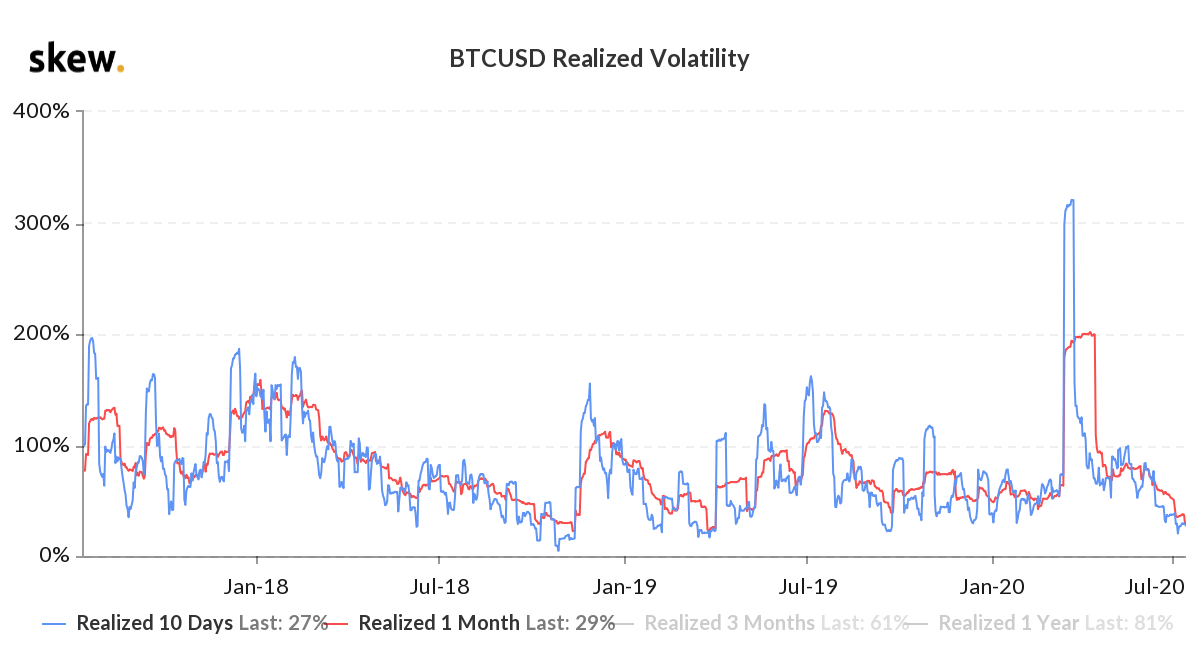 The realized volatility of Bitcoin hits a three-year-low. Source: Skew.com

The multiyear low level of volatility amid strong rallies of altcoins prompted expectations of a large price movement. In recent weeks, altcoins such as Chainlink (LINK), Tezos (XTZ) and Cardano (ADA) outperformed both Bitcoin (BTC) and Ether (ETH). LINK, for example, achieved a new all-time high in the second week of July, despite the stagnant crypto market.

Based on the increase in appetite for cryptocurrencies with low market capitalizations, traders generally expect Bitcoin to see a spike in volatility. Skew data shows that major Bitcoin futures exchanges such as Bybit have seen a gradual increase in open interest. 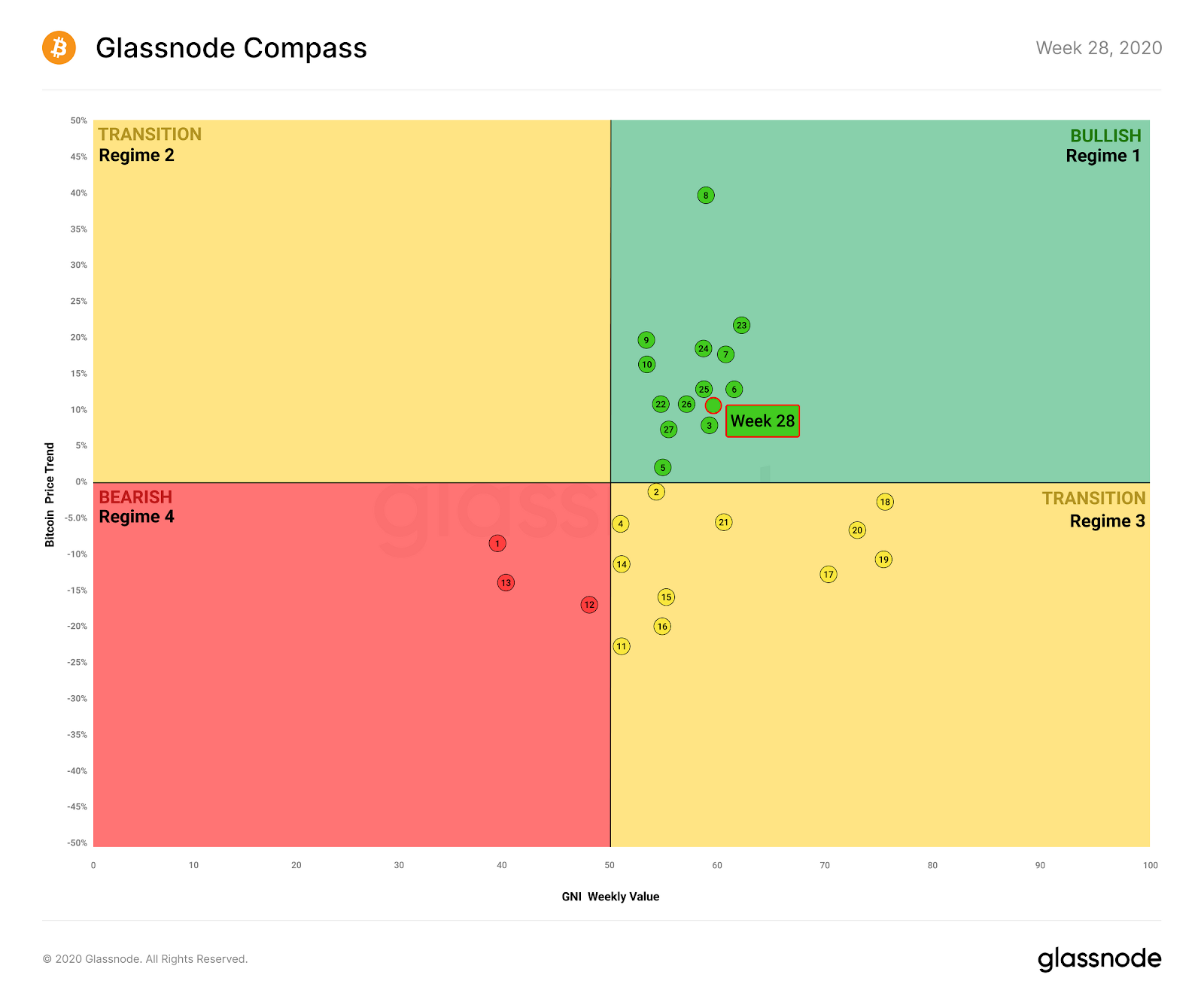 Data from Blockchain.com shows the hash rate of the Bitcoin blockchain network hit a new record high on July 8, reaching 125.99 million terahashes per second. It surpassed the previous all-time high set in the first week of March, moments before BTC fell below $3,600 on Black Thursday.

The hash rate of Bitcoin surging to a new high so quickly after the block reward halving on May 11 carries weight. A halving typically leads to a substantial decline in hash rate because it overnight cuts in half the amount of BTC that miners can mine. After a halving, miners mine less BTC and generate less revenue, but their cost of mining remains the same. As such, analysts anticipated the hash rate would drop for a relatively long period throughout 2020.

Indeed, after the halving, the hash rate dropped to as low as 90.29 million TH/s. Within less than two months, it hit a new peak, indicating that the mining sector remains healthy and the probability of a death spiral is extremely low. 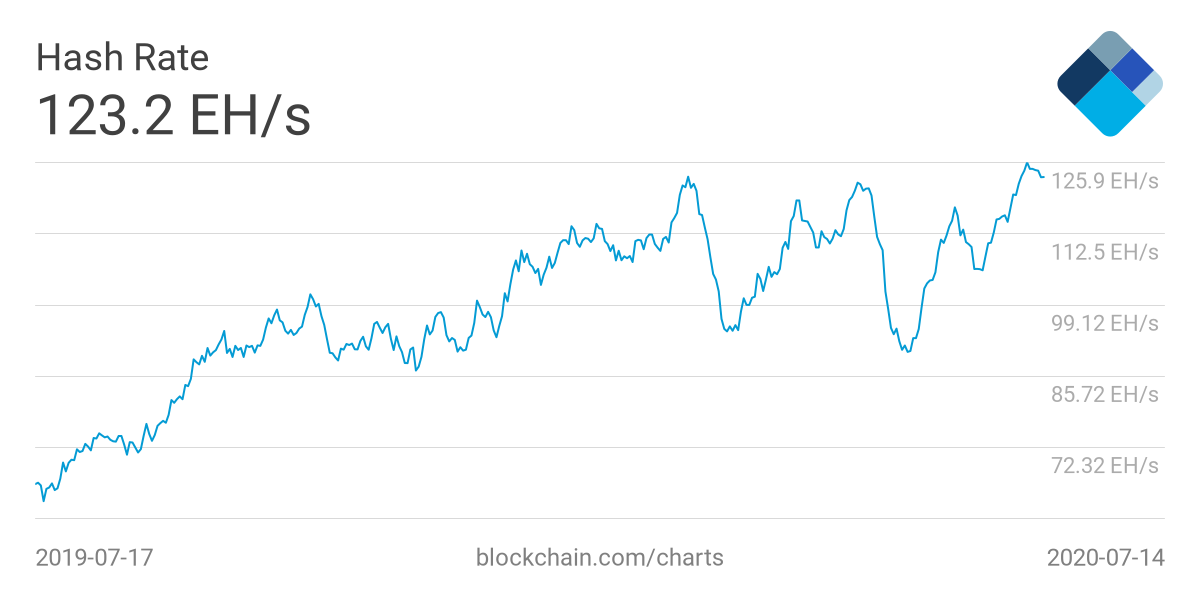 A death spiral phenomenon, which occurs when the majority of miners in the Bitcoin network stop mining altogether, was also feared to be in the cards. Theoretically, a death spiral could occur if mining becomes largely unprofitable within a short period.

But possibly due to the rainy season in Sichuan, China that has decreased electricity costs, miners have recovered rapidly from the halving, reducing the likelihood of a sudden sell-off, which might drop the selling pressure on Bitcoin.

According to a chart published by Bitcoin trader â€œNunya Bizniz,â€� the price of BTC historically saw extended ranges after a halving, which have led to substantial rallies in the past.

An extended tight range is considered to be an optimistic trend because it builds up a foundation for a stronger rally. When BTC rallies on the back of a short-lived range, it could leave it vulnerable to a steep correction.

On July 13, Charles Edwards, digital asset manager at Capriole, reported that the highly anticipated Hash Ribbons buy signal was confirmed. Edwards, who created the indicator, wrote in a tweet: â€œ#Bitcoin Hash Ribbons â€˜Buyâ€™ signal just confirmed. The post-Halving signal is particularly special. It will probably be a very long time until the next occurs. …and so the great bull run begins.â€�

The Hash Ribbons indicator spots the low point of Bitcoin by predicting a potential miner capitulation through the evaluation of the hash rate. The indicator is based on a theory that BTC tends to bottom out after miners sell-off, or after the hash rate of BTC reaches a low point. Both the record-high hash rate of Bitcoin and the Hash Ribbon buy signal indicate miners have already gone through a sell-off phase.

The â€œHODLwaveâ€� chart created by cryptocurrency investor Willy Woo demonstrates an increase in newfound demand for Bitcoin. The lower HODLwaves tend to increase during a market bottom because new money enters the market. On his website, Woo explains the model: â€œThe upper contours, represent supply (old coins that have remained unmoved) while the lower contours represent new demand (coins that have recently shifted). The composite view clearly shows each bull cycle bringing in new demand.â€�

HODLwaves indicate an inflow of new capital into the Bitcoin market. Source: Woobull.com

Various data points suggest that long-time investors in Bitcoin are increasingly holding onto BTC as the market sees a consistent inflow of new investors. The data indicates that BTC could be in an accumulation phase, wherein existing and new investors foresee a long-term bull market.

â€œBTC supply not moved in over a year: 62%. BTC supply in a state of profit: 77%. Read: Many investors could be profitably cashing out, but instead choose to hodl. How can you not be bullish on #Bitcoin?â€�

Researchers at Glassnode found that external market forces are seemingly slowing Bitcoinâ€™s uptrend, as Liesl Eichholz, who is responsible for growth strategy at the company, wrote in a newsletter: â€œExternal market forces such as systemic uncertainty and unknown correlations with traditional markets may prevent BTC from breaking out at this stage, but signals remain strong nonetheless.â€�

As Cointelegraph reported on July 15, technical indicators suggest that the United States stock market rally is overheated. If equities drop, considering the recent correlation between Bitcoin and equities, BTC could become increasingly vulnerable to a near-term correction.

There is an external risk that a potential pullback in the U.S. stock market could cause the appetite for risk-on assets to drop. But a confluence of record-high hash rate, rising HODLing activity, the Hash Ribbons buy signal and historical Bitcoin price patterns have many investors optimistic heading into the fourth quarter of 2020.