Maker’s Value Locked Breaches $1B Ceiling, but There’s a Caveat

MakerDAO (MKR), the foundational protocol of decentralized finance on Ethereum, hit a new all-time high in the total value locked in its vaults.

According to data from Defipulse, the value of the collateral locked in MakerDAO vaults is now slightly above $1 billion following a steep ascent that began on July 22. 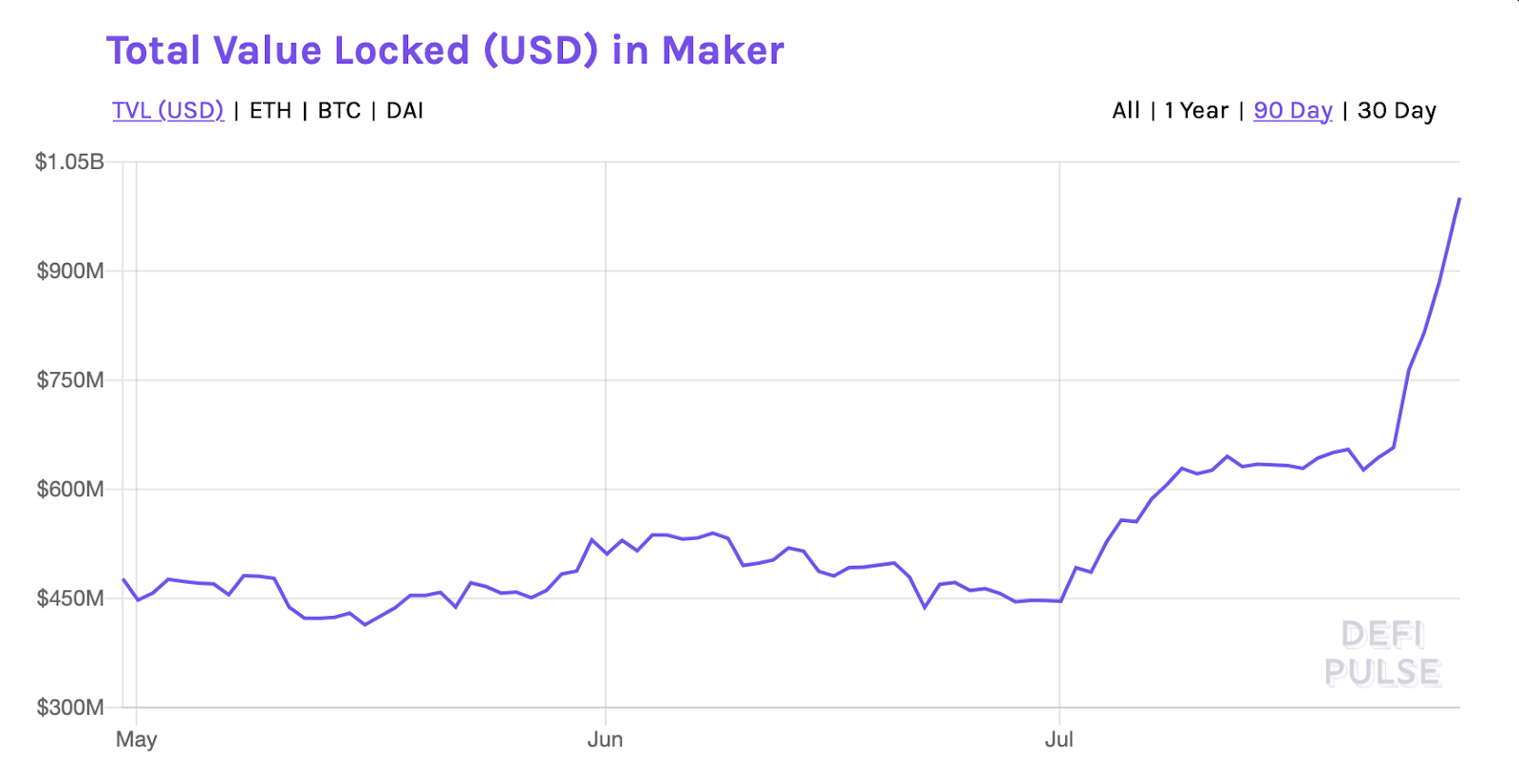 Most of that growth is due to the powerful price rally of Ether (ETH), which is still the most used collateral asset for minting Dai (DAI). Since July 22, the amount of ETH locked in Maker rose by about 13%, while the U.S.-dollar value gained almost 60%.

The growth in supplied Ether is not a coincidence, as the Maker community voted for two separate proposals to raise the â€œdebt ceilingâ€� for ETH on July 17 and 20. Combined, they pushed the amount of DAI that could be minted with ETH from 160 million to 220 million.Â

According to Daistats.com, the new ceiling is already being filled almost to capacity as 213 million DAI are now being minted with Ether.

Where is the demand coming from?

Since about July 2, DAI became the preferred asset to farm the COMP token. As Cointelegraph previously reported, over $800 million in DAI was at one point borrowed even as the total DAI supply amounted to just $200 million.Â

The discrepancy between the two numbers is due to recursive borrowing. COMP farmers will supply DAI to Compound, then borrow 75% of the tokens they provided, and supply them again. Repeating this process enough times results in about 3x leverage, boosting Compoundâ€™s total value locked by that much in the process.

Once the leverage process is over, the only way to obtain more DAI without affecting its market price is by minting it. With a Maker borrow interest rate of 0%, ETH is currently the most efficient asset to do so. While it is unlikely that all of the new DAI were minted just for Compound, it represents by far the largest destination for the stablecoin.

The true amount of DAI locked in Compound is currently $139.6 million, which can be obtained by polling Makerâ€™s â€œpieâ€� function, representing the DAI Savings Rate, for Compound DAIâ€™s token address on Etherscan. Liquidity pools for other major DeFi projects amount to $23 million.

The pitfalls of the Total Value Locked metric

While the TVL measurement is much celebrated in the DeFi community, it largely fails to paint an accurate usage picture. With liquidity mining incentives, otherwise pointless actions like borrowing the same asset as the collateral suddenly become lucrative. Indeed this is impossible to do through Compoundâ€™s standard interface.

In a report published by DappRadar, Ilya Abugov shows that just 30 wallets account for 65% of the supply volume and 73% of the borrowing volume:

â€œSo while the industry may be focused on TVL metrics we can see that a few whale users can create the illusion of activity.â€�

ShareTweet
Comments Off on Maker’s Value Locked Breaches $1B Ceiling, but There’s a Caveat