Crypto markets have today again taken a major downturn, with virtually all of the major coins by market cap seeing double digit losses — some as high as over 20 percent.

Friday, Dec. 7 — Crypto markets have today again taken a major downturn, with virtually all of the major coins by market cap seeing double digit losses. Some coins are down by over 20 percent, as data from Coin360 shows. 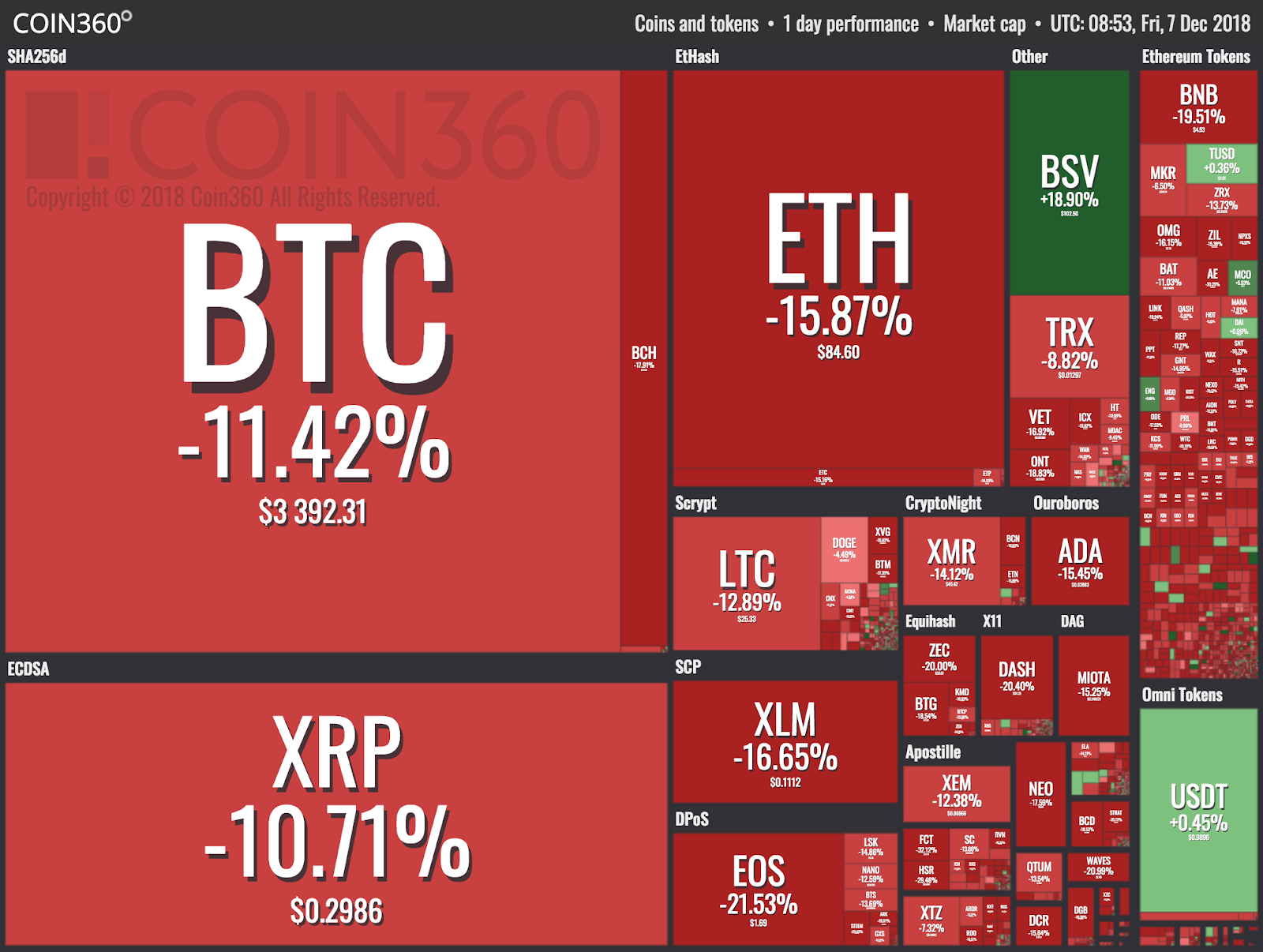 Bitcoin (BTC) has taken a steep hit of over 11 percent on its 24-hour chart, and is trading at $3,400 as of press time. Having attempted to reclaim ground above the $4,000 price point in early December — to briefly trade close to $4,300 — the top coin’s recovery has failed to hold, and the asset has seen stepped losses in the days before today’s dizzying tumble.

On the week, Bitcoin is now down by around 20.5 percent; monthly losses are at a severe 47.3 percent. 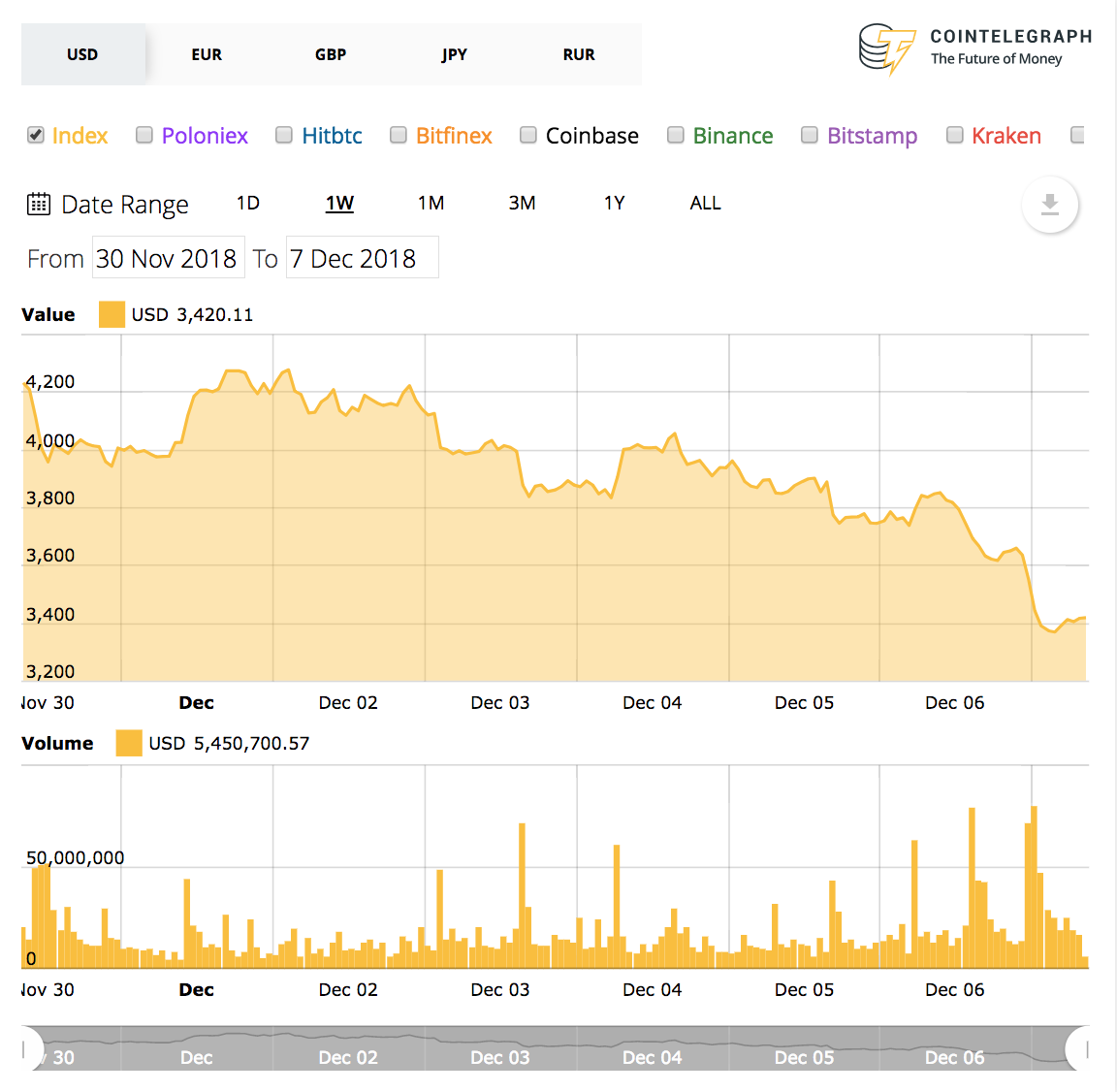 Second-largest crypto by market cap Ripple (XRP) is down by around 12 percent on the day, trading at almost $0.30 as of press time, according to Cointelegraph’s Ripple Price Index. Ripple’s weekly and monthly charts are also blisteringly red, with losses of around 23.5 and 40 percent respectively. 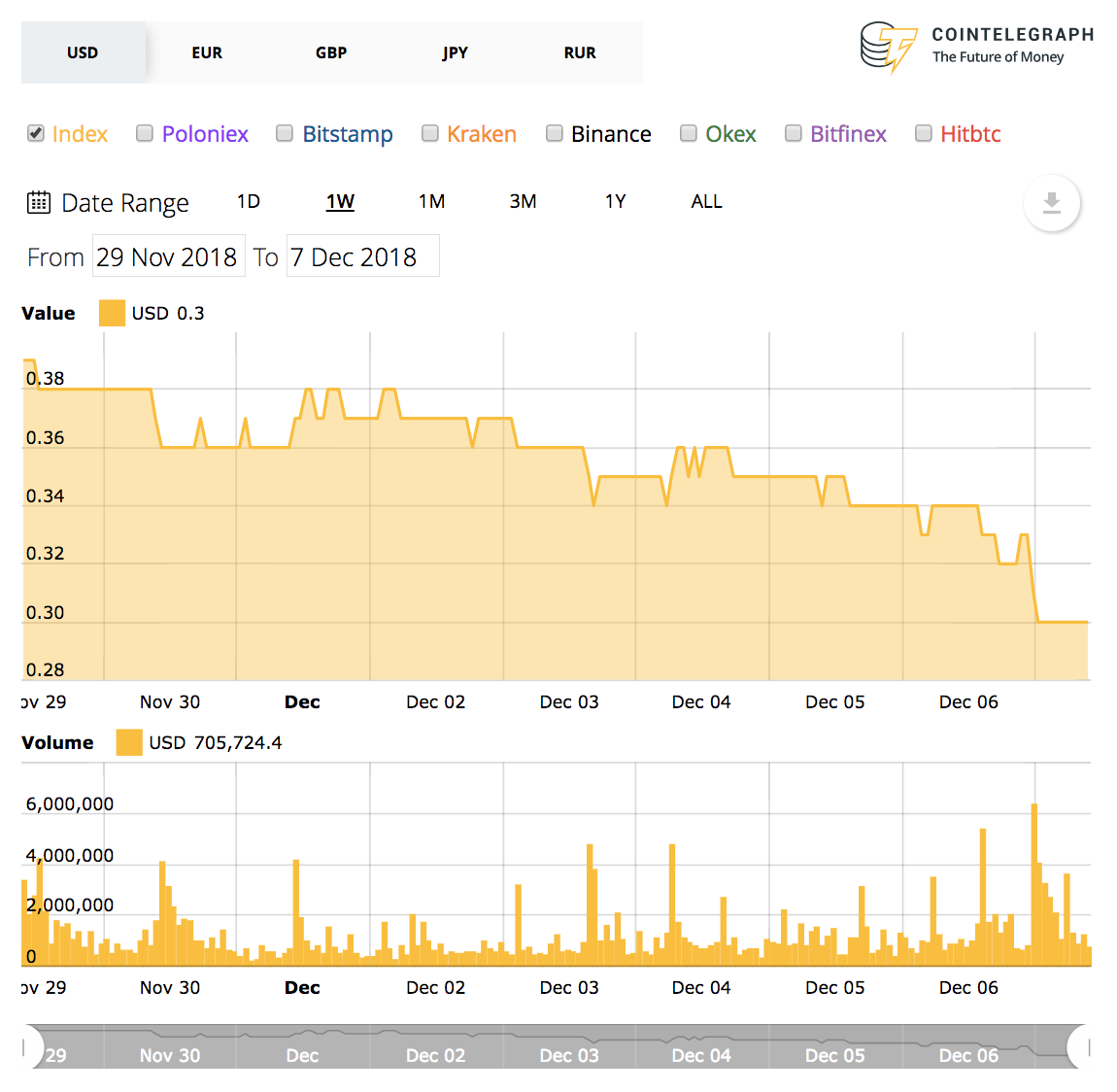 Third-ranked crypto by market cap Ethereum (ETH) has fared even worse, with 24-hour losses pushing 16 percent as of press time. The top altcoin is down to double-digit value, currently trading at $84. On the week, Ethereum down by 31.4 percent; monthly losses are close to 60 percent. 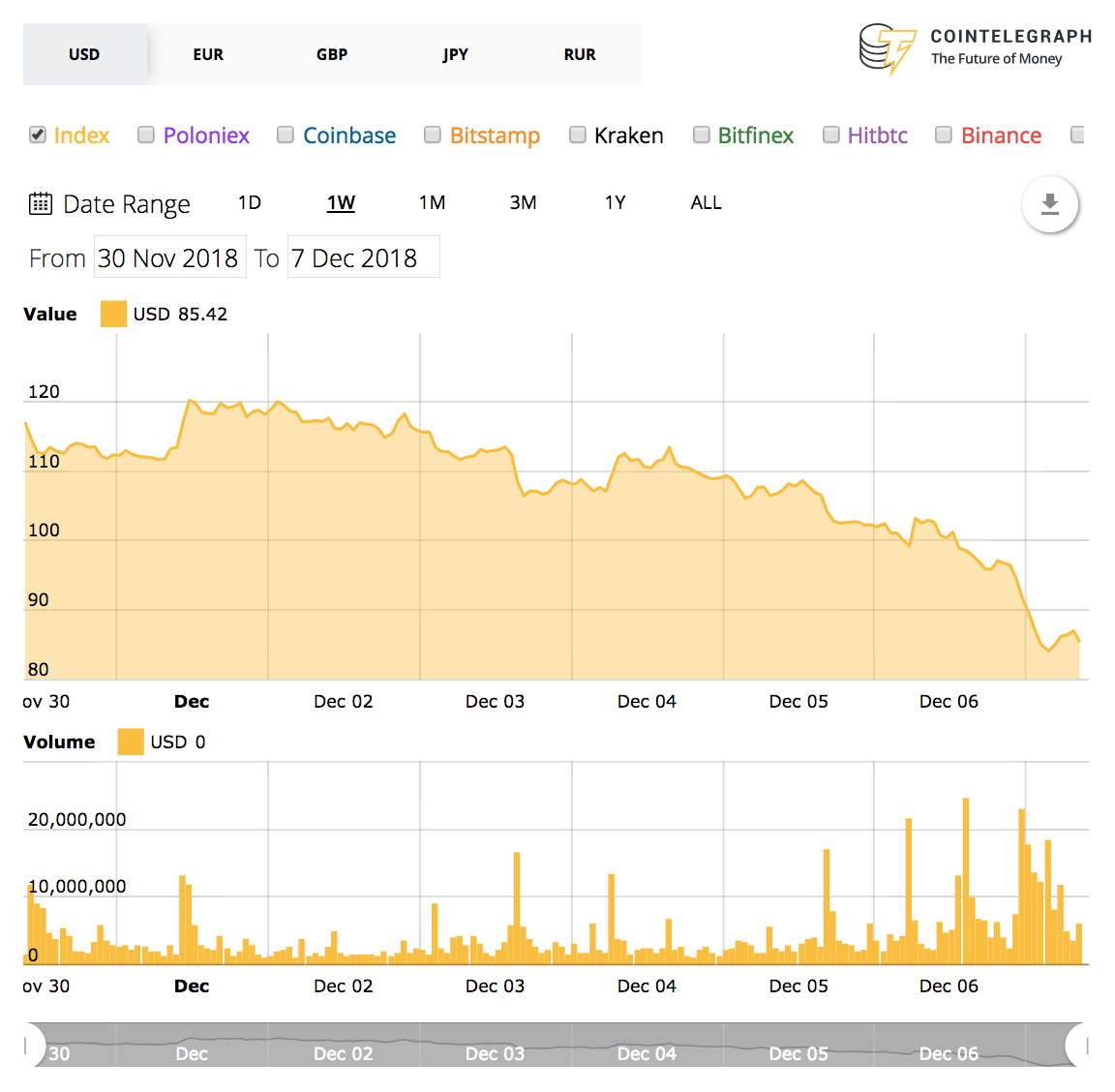 Virtually all of the remaining top ten coins on CoinMarketCap are seeing deep red; Stellar (XLM) and Bitcoin Cash (BCH) are both down almost 18 percent, at $0.11 and $102.3 respectively; eighth largest ranked crypto Litecoin (LTC) is down close to 15 percent, trading at $25.3, and EOS (EOS) is the hardest hit, down almost 23 percent on the day at $1.68.

Newly-forked “Bitcoin SV” (BSV) is the only exception among the top ten, soaring 20 percent on the day to trade at around $109, sealing the ranking of 5th largest crypto. With a market cap of around $1.94 billion as of press time, BSV is holding a slim margin ahead of BCH; the latter, ranked 7th, currently has a market cap of about $1.77 billion.

Just yesterday, news broke of a new lawsuit from tech development firm UnitedCorp against Bitmain, Bitcoin.com, Roger Ver, and the Kraken Bitcoin Exchange, which alleges the defendants engaged in manipulation and unfair practices during the immediate aftermath of the BCH-BSV hard fork.

The remaining coins in the top twenty by market cap are all seeing losses of between a 8 and 22 percent range.

Total market capitalization of all cryptocurrencies is atca around $107.1 billion as of press time, down around 20 percent since the start of its weekly chart, when it was close to $136 billion. 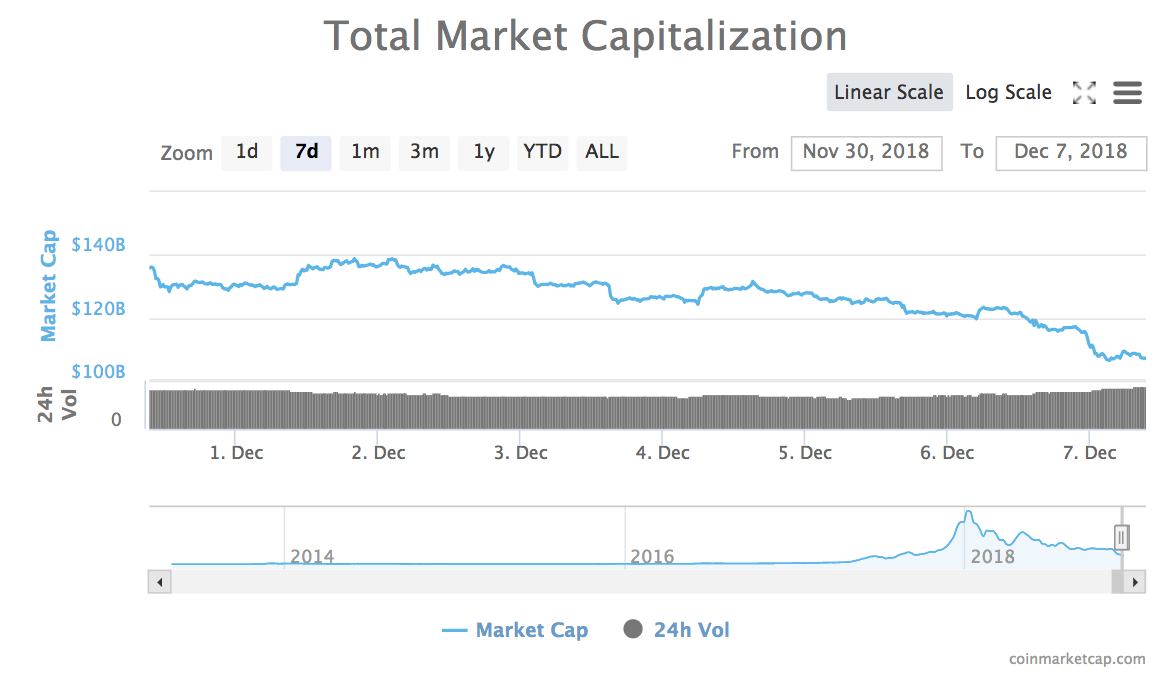 With the markets unremittingly bleak, the United States Securities and Exchange Commission (SEC) has meanwhile yet again postponed its decision on the high-profile Bitcoin (BTC) exchange-traded fund (ETF) from investment firm VanEck and blockchain company SolidX.

A new deadline of the end of February 2019 has now been set; SEC commissioner Hester Peirce — who earned the moniker of “Crypto Mom” for her dissent over the SEC’s decision to reject a Bitcoin ETF proposed by the Winklevoss twins — told investors this week; “Don’t hold your breath” awaiting a BTC ETF approval.