A while ago we have written about the launch of ASIC miners for Bytom (BTM) from Bitmain right in time when Bytom was actually launching their network. The Antminer B3 ASIC miners for Bytom were offering 780 H/s with 360 Watts of power usage and this essentially has made CPU mining pointless right from the start. Since then however there has been some development regarding the use of GPUS and Nvidia ones in particular for mining BTM and surprisingly or not at this point of time you can get better performance from video cards than what the ASICs can provide you with, depending on your mining rigs of course. So if you are interested in mining Bytom (BTM) and have Nvidia-based mining rigs you might be interested to give this a go. Currently it may not be that profitable, but mining some coins now and holding them for the better and brighter future of Bytom (BTM) may not be a bad idea. 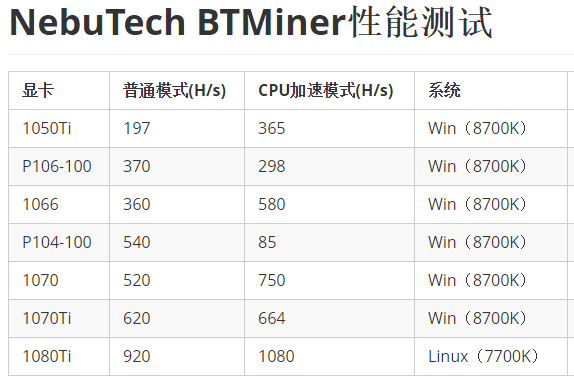 The NebuTech BTMiner is a closed source Bytom (BTM) GPU miner for Nvidia CUDA that is available for both Windows and Linux operating systems and the latest version works pretty well, just have in mind it has a 3% developer fee built-in. The only drawback it is that the miner and the documentation is in Chinese only, but you can easily figure things out and start mining in no time on a pool of your choice that supports BTM such as F2Pool or AntPool for example. The miner itself is console only, though there is a GUI as well, but also only in Chinese, so better stick to the console anyway. The funny thins is that you can beat the performance of an Antminer B3 ASIC with just a single GTX 1080 Ti GPU, let alone with a rig of 6 of these GPUs, so for once the expensive ASIC miners are not doing that great. Make sure that you have an up to date Nvidia video driver installed – version 396 or newer as otherwise you will be getting an error and will not be able to use the software for mining. The miner has an option for mining rigs with more powerful CPUs that can increase the performance a bit more extra than on regular mining rigs with slow and cheap dual core CPUs. Overclocking the memory does not help much, though GPU clock can increase performance, you can also play with the power consumption as even lowering the TDP to about 60-70% may not decrease performance that much, even though the miner can be power hungry normally, so play around and report your findings in the comments below.