Researchers have published a new report on what they say is a “relentless” crypto mining botnet that lurks behind seemingly innocuous content like JPEG images of Taylor Swift.

Researchers have published a new report on what they deem to be a “relentless” crypto mining botnet that lurks behind seemingly innocuous content such as JPEG images of Taylor Swift.

The botnet — best known as MyKings (alternatively as DarkCloud or Smominru) — has been active since 2016, according to a Dec. 18 news release from Gabor Szappanos at SophosLabs.

While all “underpatched, low-hanging fruit” on the internet — to use Sophos’ phrasing — has long been vulnerable to its attacks, recently the actors behind MyKings have allegedly added bootkit functionality, which makes it all the more resistant to detection and effective removal.

$3M in Monero illicitly mined via MyKings to date

SophosLabs’ report provides a full overview of the botnet’s operations, which Szappanos characterizes as a “relentlessly redundant [i.e. repetitive] attacker” that attacks mostly Windows-based services that hosts database management systems such as MqSQL and MS-SQL, network protocols such as Telnet, and even servers running CCTV camera storage.

The report notes that the botnet’s creators appear to prefer to use open source or other public domain software and are highly skilled at customizing and enhancing source code to insert custom components that can execute attacks and perform automated update processes.

The botnet launches a series of attacks against a server with the aim of delivering a malware executable, frequently a Trojan dubbed “Forshare,” which was found to be the most common payload on infected servers.

Forshare is used to ensure that various different Monero (XMR) cryptominers run on the targeted hardware, with SophosLabs’ estimating that the botnet operators have earned roughly $3 million in Monero to date. This translates into a current income of around $300 per day, due to the cryptocurrency’s recently lower relative valuation.

Not what she seems 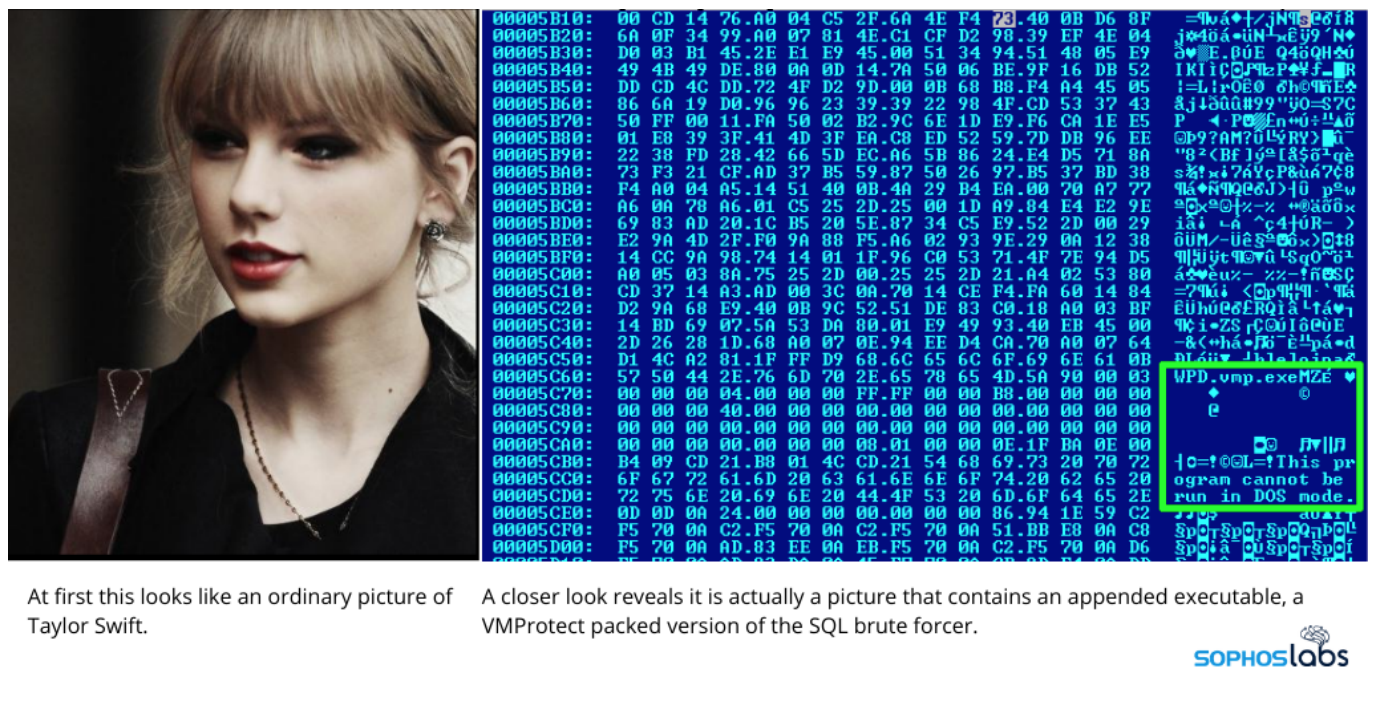 In the studied example — an imperceptibly modified image of the pop star Taylor Swift — SophosLabs explains that the .jpg photo had been uploaded to a public repository, concealing within it an executable that would automatically update the botnet when downloaded.

“Even if most of the components of the botnet are removed from the computer, the remaining ones have the capability to restore it to full strength simply by updating themselves. All of this is orchestrated using self-extracting RAR archives and Windows batch files.”

The report indicates that the countries with the highest number of infected hosts are currently China, Taiwan, Russia, Brazil, the United States, India and Japan.

In November, Cointelegraph reported that the software available for download on Monero’s official website, getmonero.org, had been briefly compromised to steal cryptocurrency and drain users’ wallets.