Bitcoinâ€™s â€œappreciationâ€� will continue unless a freak occurrence interrupts it, says Bloomberg Intelligence.

Bitcoin (BTC) will only stop gaining in value if â€œsomething unexpectedâ€� stops it, Bloomberg researchers believe.

Bitcoin has reentered mainstream consciousness in recent weeks thanks to price rises which topped out at over one-year highs of $12,400.

Despite a modest pullback, gains have broadly been retained, and analysts are confident that trajectory remains skewed to the upside beyond the immediate short term.

â€œSomething unexpected needs to happen for Bitcoin’s price to stop doing what it’s been doing for most of the past decade: appreciating,â€� he wrote.Â

Charts confirm that Bitcoin is currently within its narrowest Bollinger Band scenario on record â€” a timely occurrence after creator John Bollinger on Monday described the current bull run as â€œpicture perfect.â€� 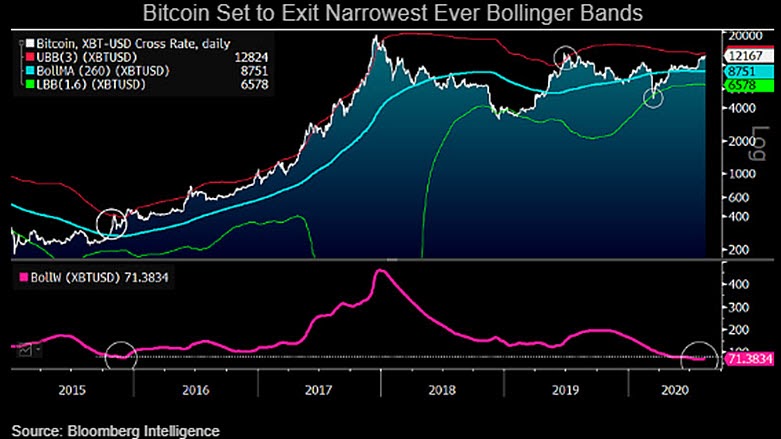 Bloomberg has revealed an increasingly pro-Bitcoin stance in its latest publications. Earlier this month, it privileged Bitcoinâ€™s price rises over those of altcoins such as Ether (ETH), which it described as â€œmore speculative.â€�

It also added that Bitcoin was stabilizing with a price six times that of gold, which itself had put in major advances to top $2,070 in a new record.

On the topic of the precious metal, with which Bitcoin still correlates, McGlone said on Monday that the bulls will continue to have the upper hand.

â€œAbove former highs of about $1,900 an ounce in mid-August, the gold bull market looks to us to be in early days yet likely to consolidate gains for a while,â€� part of another tweet reads.

As Cointelegraph reported, U.S. dollar weakness appears to be fuelling safe haven successes, something which shows no sign of stopping as the USD currency index hits two-year lows.