The digital asset is now experiencing what may be a historic rise in acceptance, as the COVID-19 pandemic revealed its needs.

On July 22, 2020, the United States Office of the Comptroller of the Currency published aÂ letter clarifying that national banks and federal savings associations can indeed take custody of cryptocurrency assets. In the letter, Bitcoin was also acknowledged as â€œthe first widely-adopted cryptocurrency.â€� On the same date, VISA, one of the largest payment companies with access to over 61 million merchants globally, revealed plans to offer Bitcoin (BTC), Ether (ETH) and XRP payments.

These steps toward mainstream acceptance come at a fortuitous yet harrowing time for world economics. Unprecedented quantitative easing, a fiscal stimulus and private bailouts have all returned in a much larger form than they existed in 2008. This time, however, it has all come in response to the COVID-19 pandemic crisis. The Federal Reserve along with central banks around the world are responding to the current financial crisis with trillions of new monetary units, leading to trillions more in existing state debt. A sudden and exponential increase in a nationâ€™s monetary supply usually leads to high levels of inflation and, eventually, a mass devaluation of the currency. And in these situations, a cryptocurrency such as BTC, which has a fixed number of units, mathematically guaranteed, holds a unique inflation-proof value for investors.

One such investor, Paul Tudor Jones, a revered hedge fund manager, holds approximately 2% of his assets in BTC. He sees Bitcoin as a hedge against inflation and rampant central bank currency creation, comparing the digital asset to gold in the financially troubled 1970s.

Mike Novogratz, the chairman and CEO of Galaxy Digital â€” a diversified financial services firm focused on the digital asset, cryptocurrency and blockchain technology industry â€” also sees the current financial crisis as an â€œamazing environmentâ€� for Bitcoin. On April 2, Novogratz told CNBC that he had seen hedge funds and high-net-worth investors buying Bitcoin for the first time. Positive sentiment was already on the rise in 2019 as Bitcoinâ€™s price nearly doubled, outperforming traditional investments including gold and the S&P 500. The current crisis has increased this trend.

Amid this economic downturn, Grayscale Investments has announced the strongest quarter in its history. Investments, 88% from institutional investors, hit a record high for Grayscaleâ€™s digital investment products, including Grayscale Bitcoin Trust, in the first quarter of 2020. The company has $2.2 billion in assets under management. Total investments into Grayscale crypto products in Q1 2020 amounted to $503.7 million, compared to about $1.07 billion per month over the last 12 months.

Cryptocurrency hedge fundsâ€™ assets under management more than doubled in 2019, rising to more than $2 billion at the end of last year, according to a survey published on May 11 by Big Four audit firm PricewaterhouseCoopers and Elwood Asset Management Services published. Based on data from the largest global crypto hedge funds by assets under management, including crypto index funds and crypto venture capital funds, the crypto hedge fund industry is expected to grow significantly with the price of Bitcoin. According to the report:Â 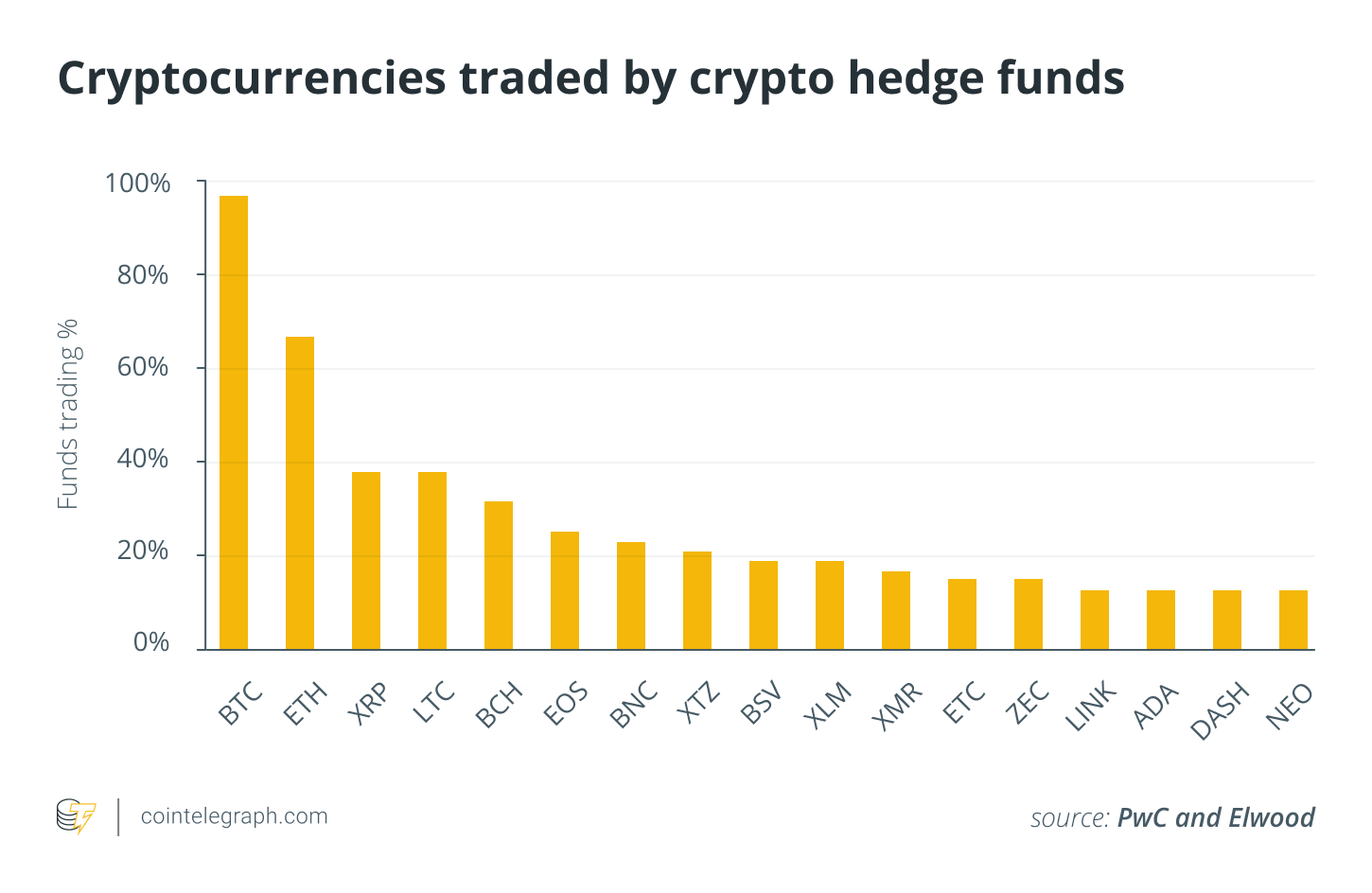 â€œI expect the crypto hedge fund industry to grow significantly over the coming years as investing in a crypto fund may be the easiest and most familiar entry point for many institutional investors looking at entering this space.â€�

Hester Peirce, a commissioner with the U.S. Securities and Exchange Commission, also sees institutional demand rising. She confidently stated that she has been â€œseeing more interest coming from institutional quarters than we have in the past. I think that will continue â€¦ as people are looking to diversify their portfolios, I think people are also likely to look more to the crypto space.â€�

In conclusion, the crypto hedge fund space has proven via its growth, resilience and performance to be a significant investment opportunity. The PwC report, along with the concurrent opinions of several well-known figures in finance, is more evidence of that. Set alongside todayâ€™s backdrop of economic uncertainty, crypto hedge funds allow for an easy access point to this safe haven for institutional investors. What is most exciting, however, is that this is only the beginning.