Altcoins corrected as Bitcoin price dropped below $9,000, but traders buying the BTC dip could provide room for altcoins to recover.

Coronavirus cases across the globe topped 10 million today and the number of new cases in the U.S. has risen to new records in the past few days. This has put the economic revival in jeopardy as equities markets could face selling pressure. Meanwhile, safe haven assets like gold continue to perform well.Â

Earlier this week Bloomberg analyst Mike McGlone said that the drop in Bitcoinâ€™s (BTC) volatility has resulted in tightening of the Bollinger Bands, a popular technical analysis indicator used by many traders. McGlone expects that the top-ranked cryptocurrency on CoinMarketCap to eventually rally to $13,000 if it stays above the $6,500 support.

Most major cryptocurrencies have entered a consolidation phase and trading in a range-bound market can be difficult as the price action is volatile. Traders might consider reducing their risk by cutting their usual position size. Normal position size can be restored when crypto markets start trending again.Â

After failing to scale above the $10,000â€“$10,500 zone for the past few days, Bitcoin is witnessing profit booking by the short-term bulls. On June 27, the price slipped below the trendline and also the critical support at $8,910.04. 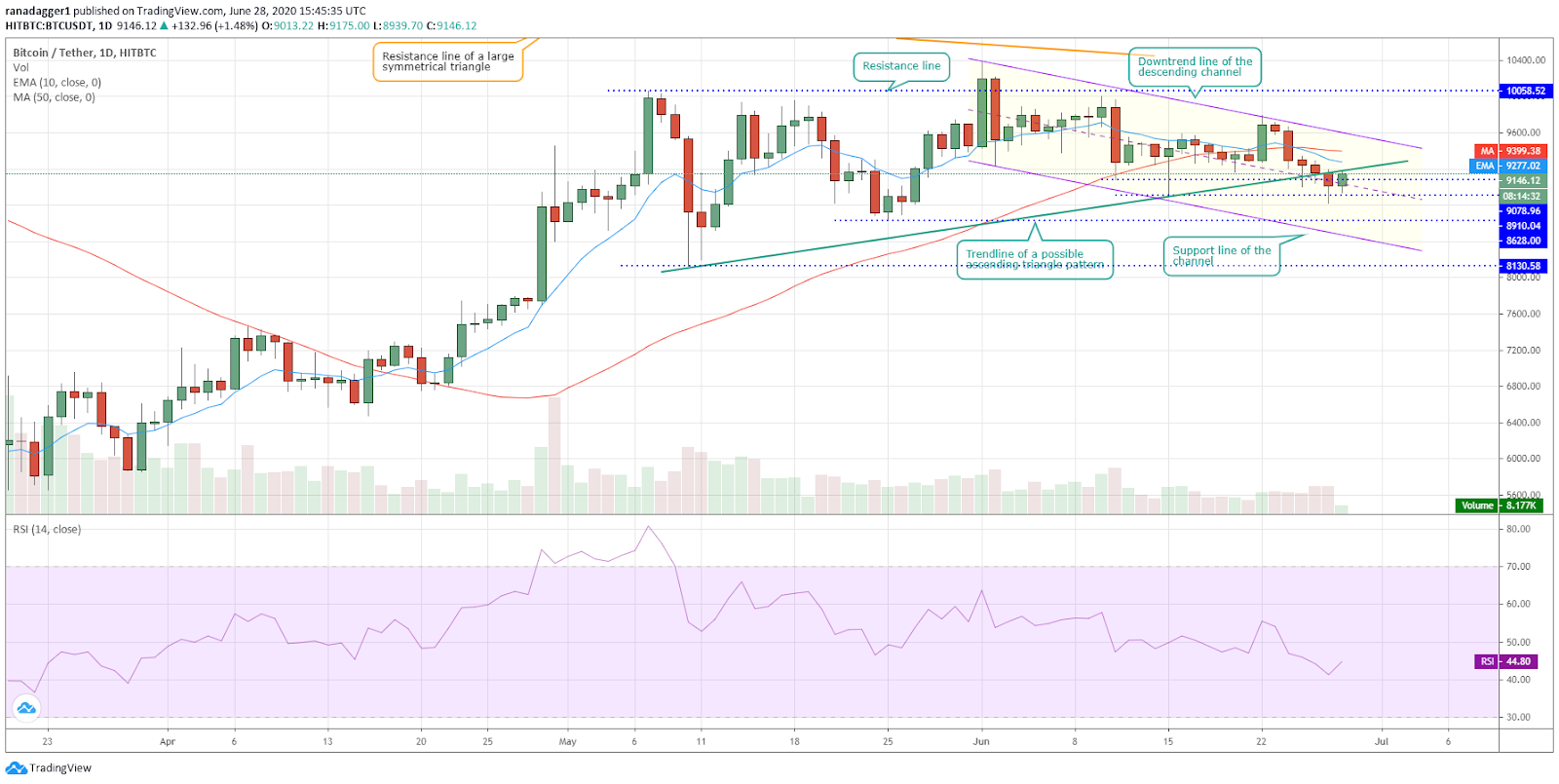 The 10-day exponential moving average ($9,277) has started to turn down and the RSI is in the negative zone, which suggests that bears have the advantage in the short-term. However, the medium-term points to a consolidation as the 50-day simple moving average ($9,399) is flat.Â

The failure of the bears to capitalize on the fall below $8,910.04 on June 27 suggests a lack of sellers at lower levels.

Currently, the bulls are attempting a recovery. If the bulls can push the price back above the trendline and sustain it, a move to the downtrend line of the descending channel is possible.Â 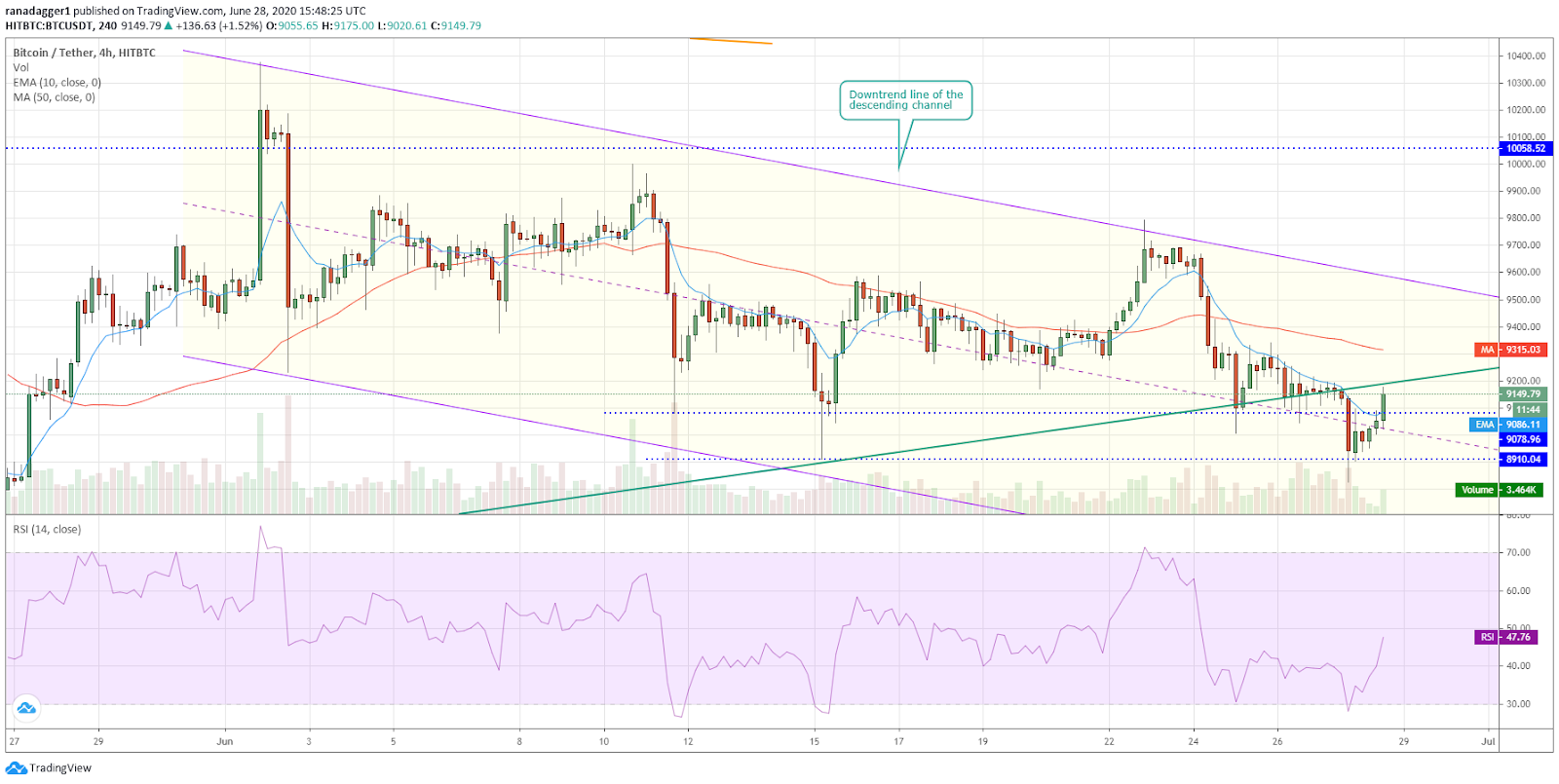 If the bulls can push the price above this resistance, the possibility of a rally to the downtrend line of the channel increases. A breakout of the channel will be the first sign of strength that will indicate a possible move to $10,000.

Conversely, if the price turns down from the overhead resistance level, the bears will once again try to resume the down move. A break below $8,825 will signal weakness. Below this support, the decline can extend to $8,628 and then to $8,400.

There is no clear trend, hence, the price action is likely to remain volatile, which can benefit the short-term trader who enters and exits trades quickly, without waiting for a large move.Â

Ether (ETH) is consolidating in an uptrend. Although the price dipped below the critical $217.67 support on June 27, the bears could not sustain the lower levels. This suggests that the bulls continue to buy the dips. 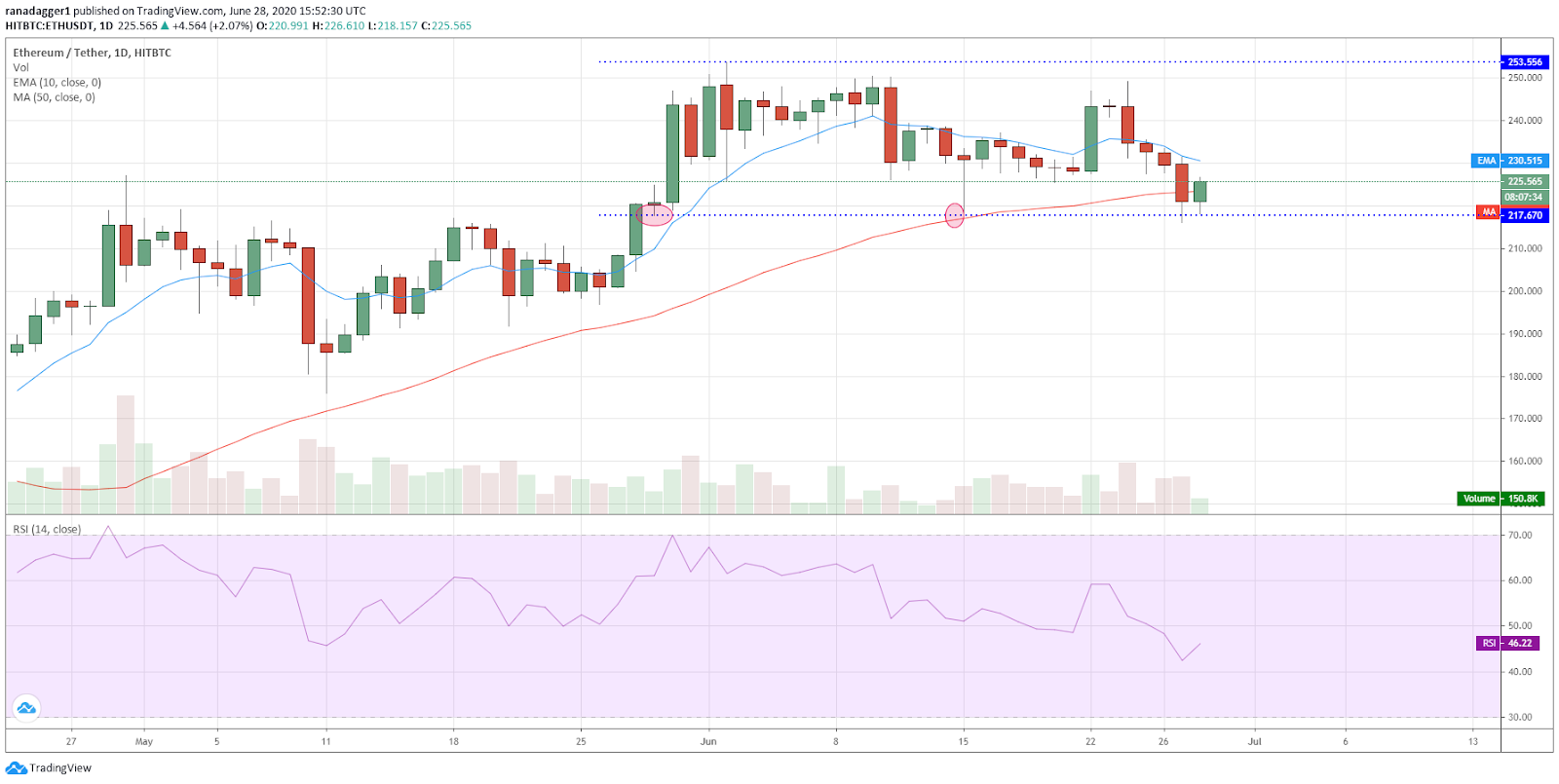 Currently, the bulls are attempting to sustain the price above the 50-day SMA ($223), which is flattening out. If successful, the second-ranked cryptocurrency on CoinMarketCap can rise to the 10-day EMA ($230).Â

Conversely, if the price turns down from the current levels, the bears will once again attempt to sink the price below the $217.67â€“$216.006 support zone. If that happens, a drop to $200 is likely.Â 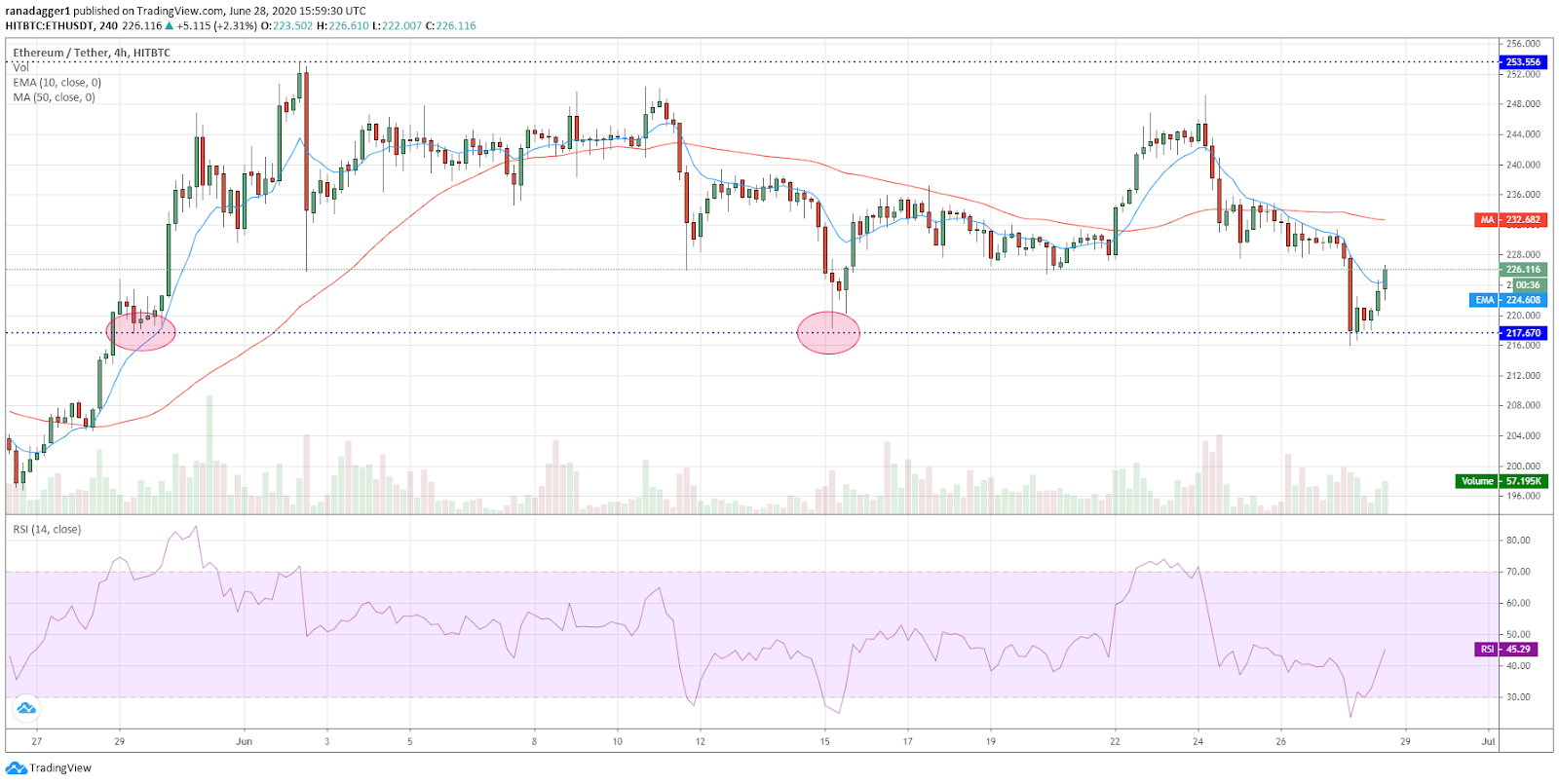 The ETH/USD pair has broken out of the 10-EMA, which is the first sign that bulls are aggressively buying at lower levels. If the price sustains above the 10-EMA, a rally to the 50-SMAâ€“$236 resistance zone is likely.Â

Conversely, if the pair fails to sustain above the 10-EMA, the bears will make one more attempt to sink the price below $216. If successful, a new downtrend is likely.Â

Therefore, traders should watch $216 closely and if this support level cracks long positions should be avoided as a deeper correction is possible.

Bitcoin Cash (BCH) has been stuck in a large range of $200â€“$280 for more than two months. Usually, when the price spends such a long time in the range, it needs a strong momentum to breakout or breakdown of the range. 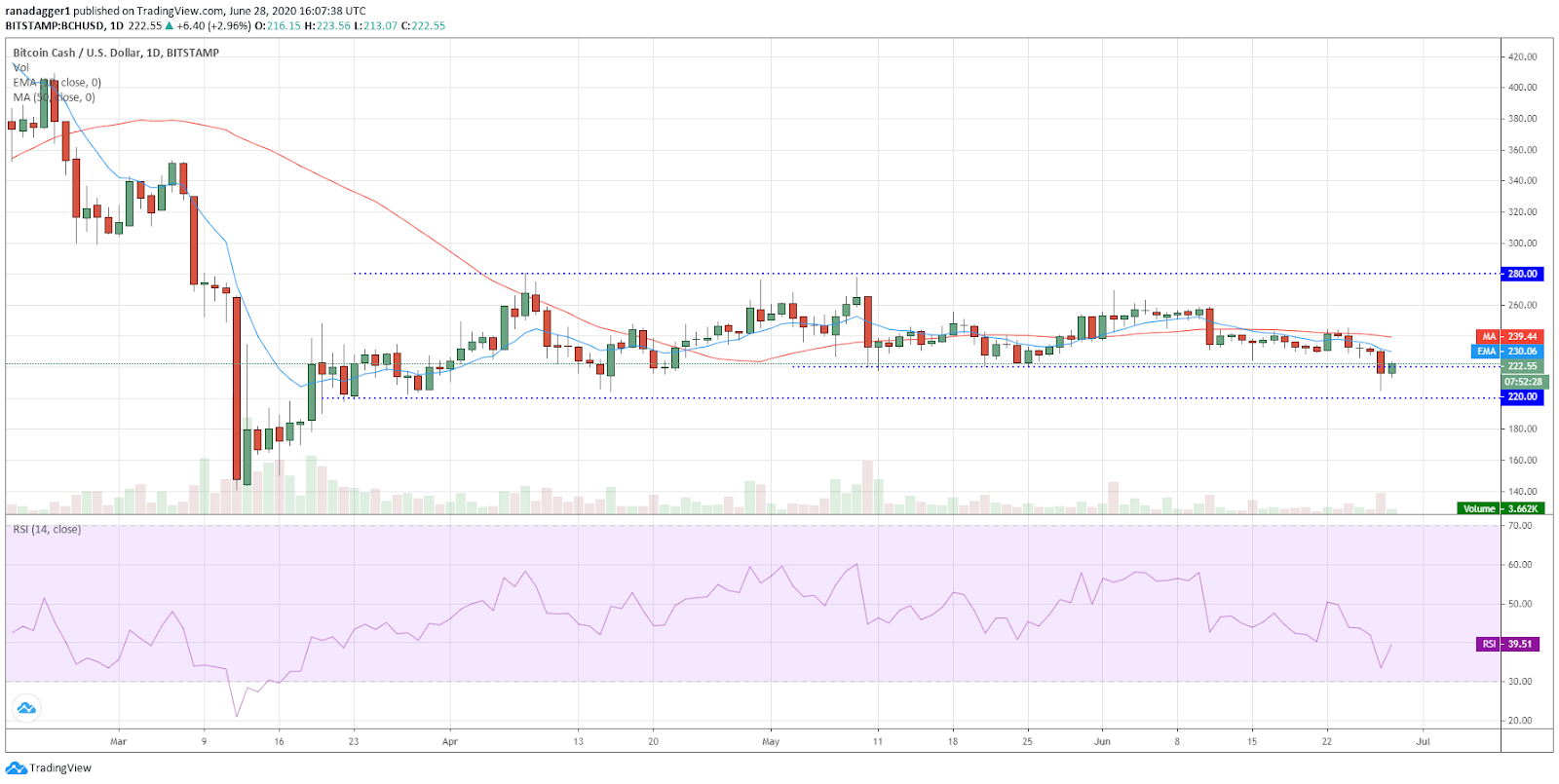 Although the 10-day EMA ($230) is sloping down and the RSI is in the negative territory, the bears could not sink the price below $200 on June 27. This suggests buying by the bulls near the support of the range.

If the bulls can sustain the rebound and push the fifth-ranked cryptocurrency on CoinMarketCap above the 10-day EMA, a move to $240 and then to $260 is possible.Â

Conversely, if the price turns down from the 10-day EMA, the bears will make another attempt to break below the $200 support. If the bears succeed, a new downtrend is likely.Â 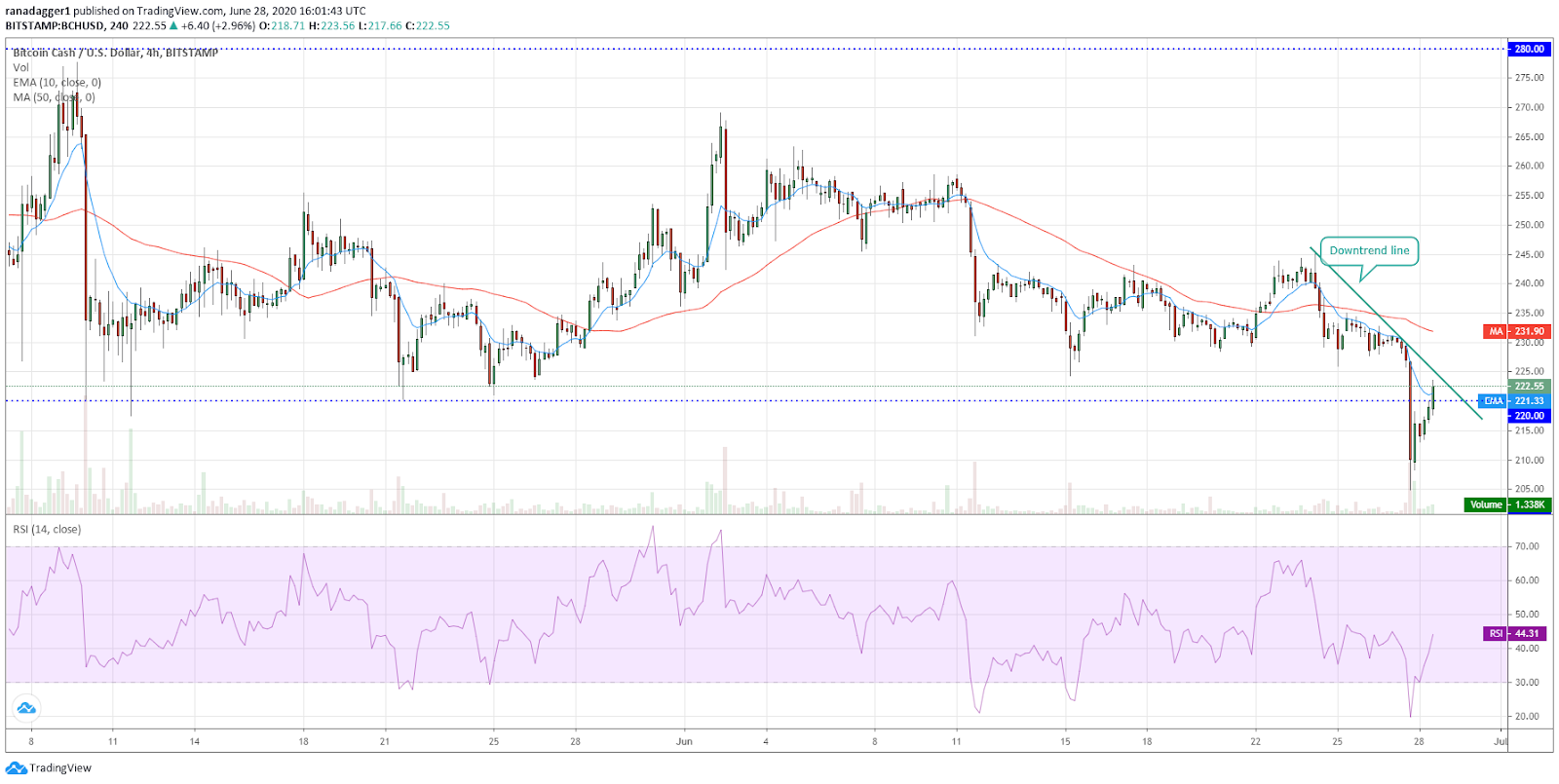 The bulls have pushed the price above the previous support turned resistance of $220, which is a positive sign. This suggests aggressive buying at lower levels.

If the BCH/USD pair breaks out of the downtrend line, the momentum is likely to pick up. The next level to watch on the upside is $235 and then $244.Â

However, if the pair turns down from the downtrend line, the bears will once again attempt to sink the price to the critical support of $200. If this support cracks convincingly, a new downtrend is likely to start.

Conversely, if the pair rebounds off $200 once again, it is likely to attract further buying as it will cement the level as a strong support.Â

Stellar Lumens (XLM) is trading inside a descending channel. On June 27, the bulls aggressively bought the dip close to the support line of the channel as seen from the long wick on the candlestick. 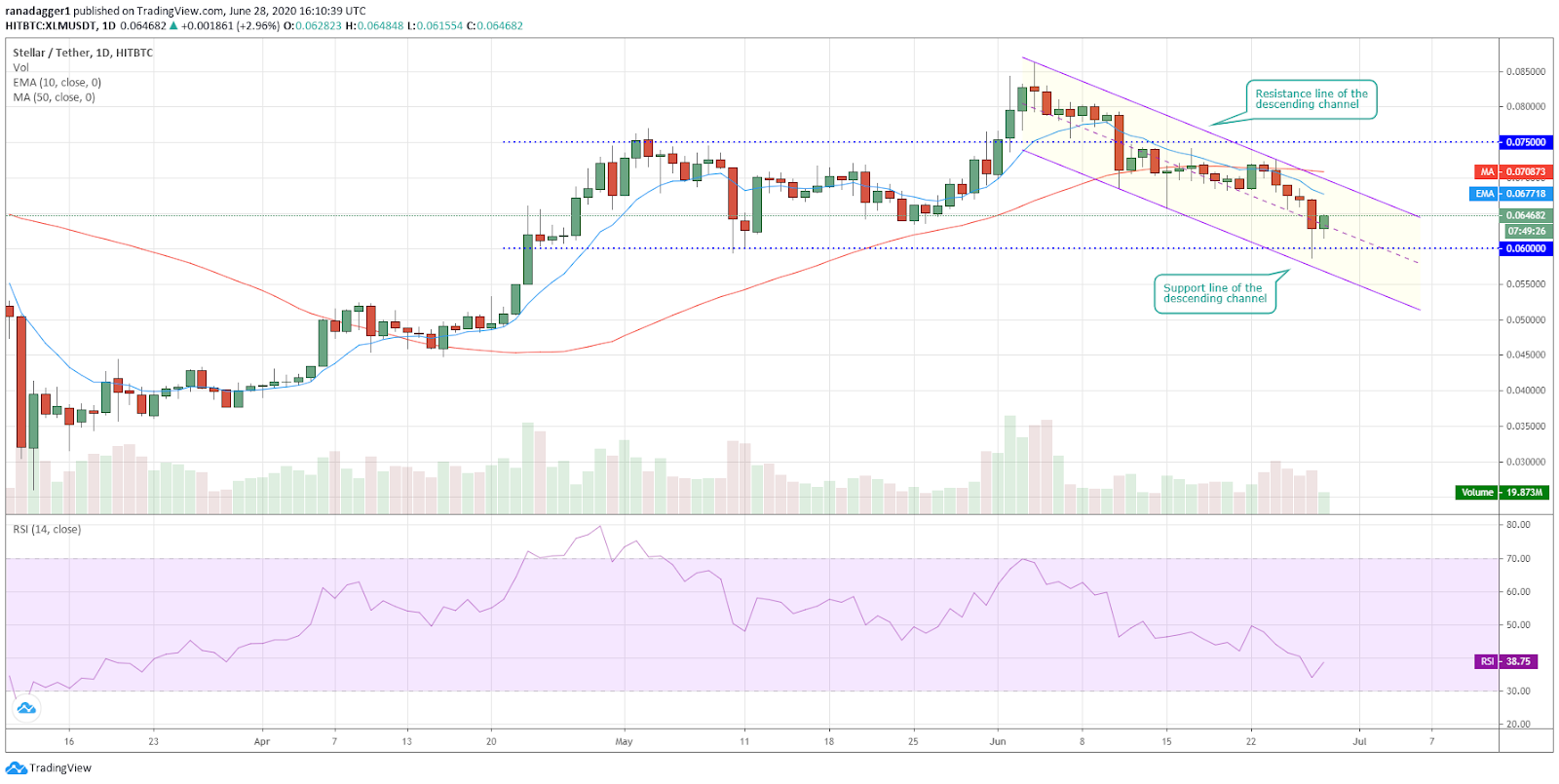 However, if the 14th-ranked cryptocurrency on CoinMarketCap turns down from the 10-day EMA, it will increase the possibility of a break below $0.060 support. Below this level, the decline can extend to $0.055.

The 10-day EMA is sloping down and the RSI is in the negative zone, which suggests that bears have the upper hands. In a downtrend, usually, selling on rallies offers a greater profit potential rather than buying the dips. 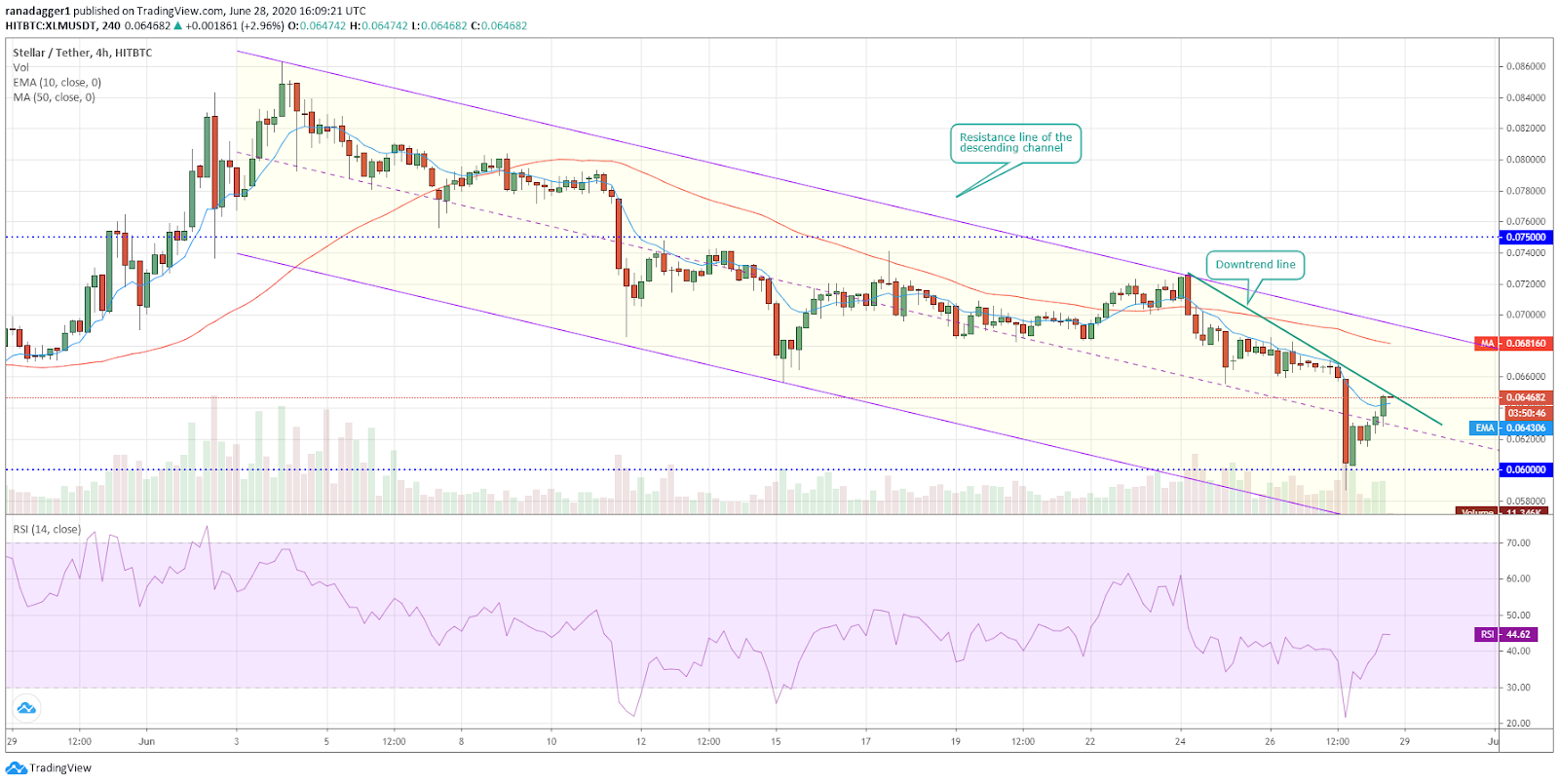 The current pullback attempt is likely to face resistance in the zone between the 10-EMA and the downtrend line.

If the price turns down from this resistance zone, the bears will once again try to sink the XLM/USD pair below $0.060. If successful, the downtrend is likely to continue.

Conversely, if the bulls propel the price above the downtrend line, the relief rally can extend to the resistance line of the channel. If the price turns down from this resistance, the bears will try to resume the downtrend.

This bearish view will be invalidated if the bulls can carry the price above the resistance line of the channel. Such a move will indicate a likely change in trend.

Chainlink (LINK) had reached close to the highs of $4.9762 on June 23 and 24 but the bulls could not break above this resistance. This led to profit booking by the short-term traders, resulting in a correction.Â Â 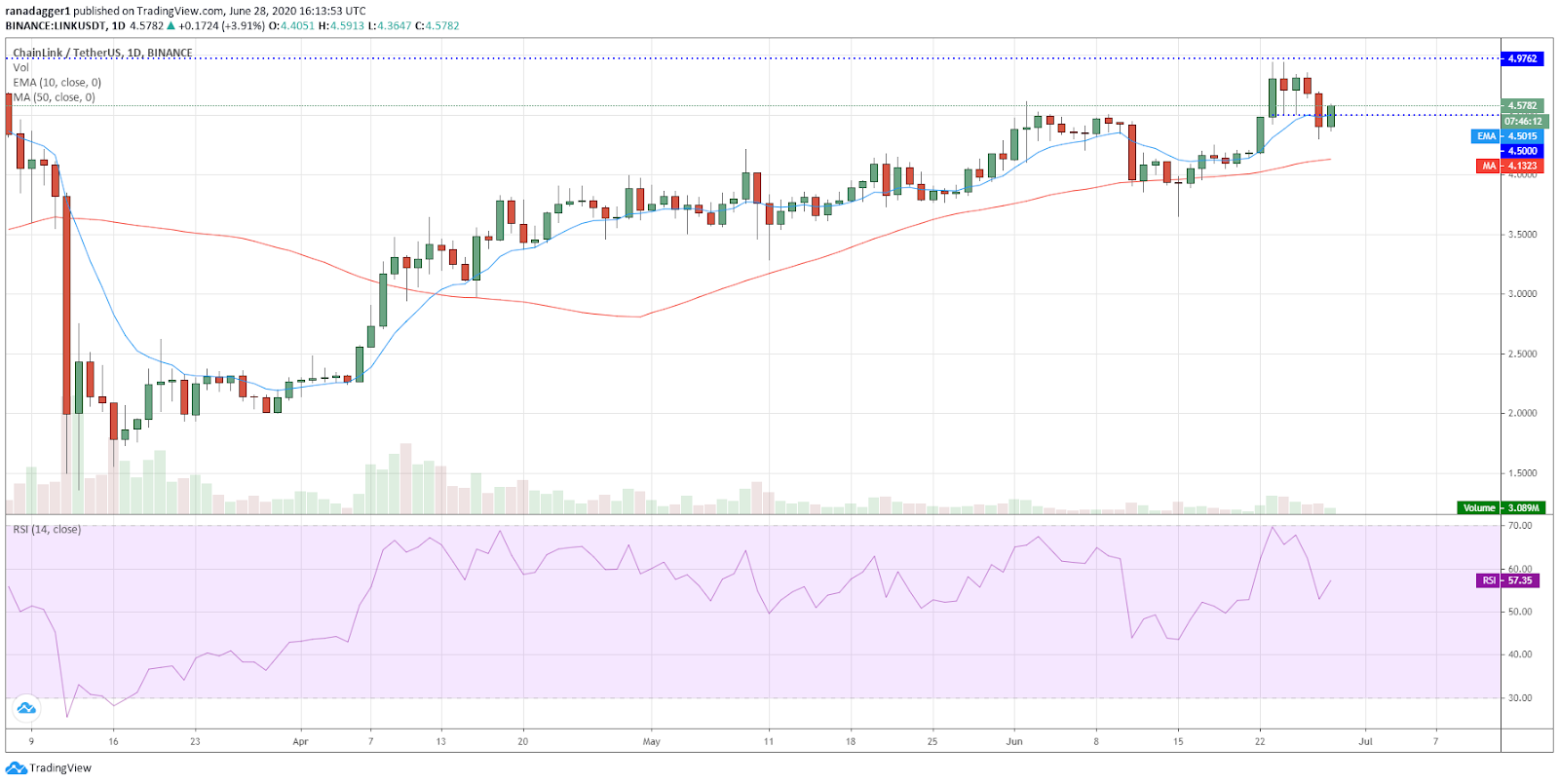 Although the price dipped below the immediate support of $4.50 on June 27, the bears have not been able to sustain the lower levels. This suggests the bulls continue to buy the dips as they anticipate the uptrend to resume.

If the price sustains above $4.50, the bulls are likely to make one more attempt to drive the 13th-ranked cryptocurrency on CoinMarketCap above $4.9762. If successful, a rally to $6 is possible. 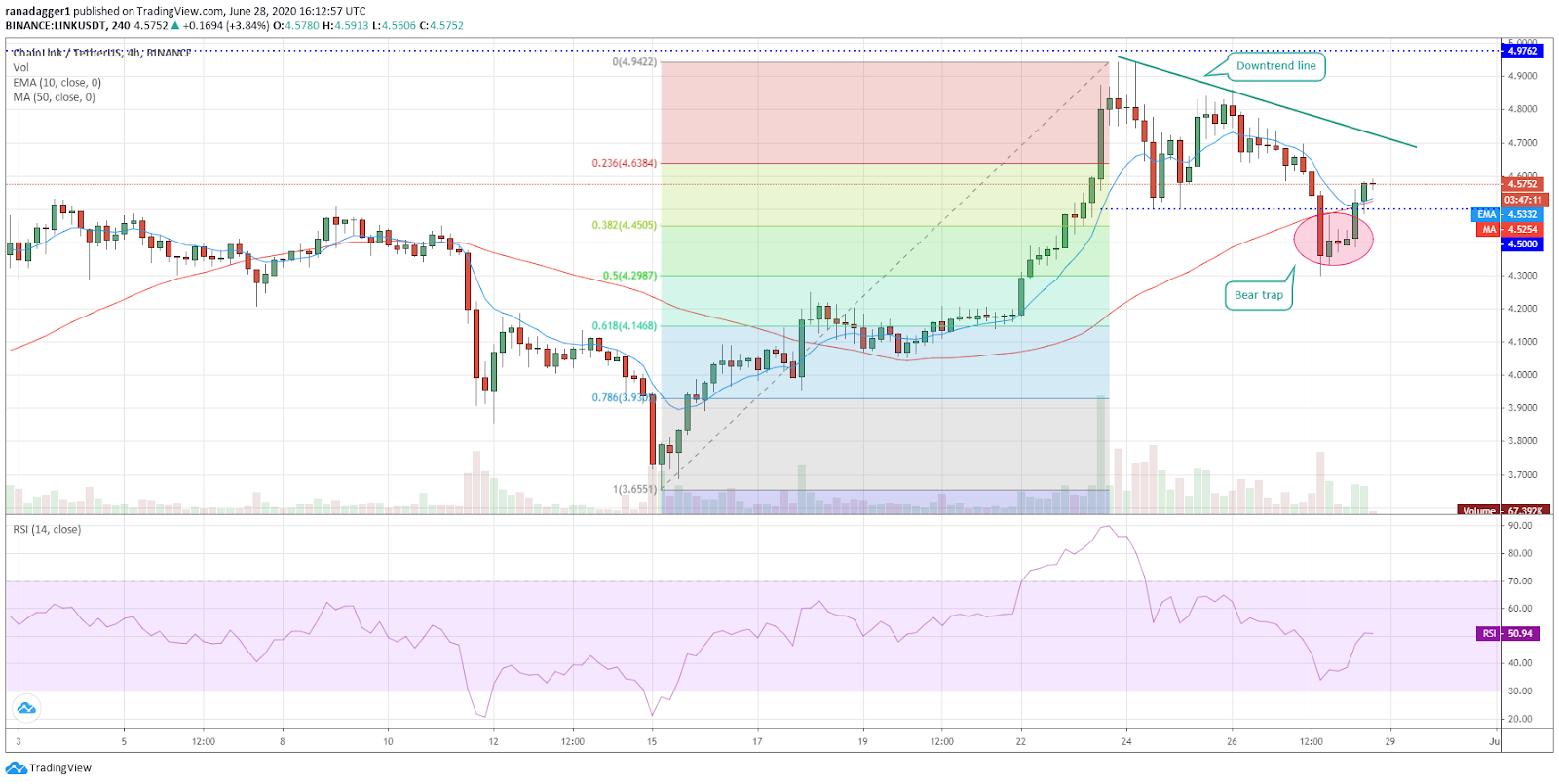 The four-hour chart shows that the LINK/USD pair found support at $4.30, which is just above the 50% Fibonacci retracement level of the most recent leg of the rally. This is a positive sign as it suggests that bulls are buying on dips.

The current rally might hit a minor resistance at the downtrend line. This level might result in a minor consolidation or pullback but it is likely to be crossed. Above this level, a retest of the highs will be on the cards.

Repeated retest of a resistance weakens it and increases the possibility of a break above it. Contrary to the assumption, if the price turns down from the current levels or the overhead resistance and breaks below the $4.30, a deeper correction is likely.Â