You don’t need to be an agriculture expert to see the writing on the wall. Current farming methods just aren’t working anymore for most farmers of the world.

There are 2 billion smallholder farms managing fewer than five acres (PDF). They are growing most of the world’s food, but if you have ever visited China, India or any African country, you will have seen the challenges of their reality: yields aren’t what they used to be; climate change, drought and pesticides are getting stronger; and kids are moving to the city. For these farmers, the difference between a good and a bad crop can mean the difference between survival and starvation for them and their families. With even a modest improvement in productivity, lives can be dramatically impacted.

It’s not just farmers themselves who have a stake in improving the system. Improving agricultural practices has also become a key political issue in many countries, such as India, where Prime Minister Narendra Modi has vowed to double the income of its 200 million farmers by 2022. The government of Vietnam has pledged incentives to help the country’s farmers remain competitive while managing the ever-growing challenge of climate change.

Politicians today can make these promises because they know they are on the cusp of a tech revolution. Low-cost sensors coupled with the internet have created an industry called IoT, or the internet of things. It’s where your hardware can go online and interface with the internet. Most people know Alexa as one of the most common home solutions; self-driving cars are soon to be in the same league.

So what about self-driving farms? Ones where hundreds of sensors listen to the plants and automate critical parts of the process, helping farmers avoid a locust invasion or tumbling prices at the market. Farming solutions can easily monitor soil temperature, water levels and other critical metrics that can be delivered as simple insights to help farmers understand and respond to environmental conditions with precision never before possible. One step further and farms can eventually plant and manage themselves. It’s not a far-fetched dream.

But, when it comes to putting IoT farming technology into practice, there remains a steep challenge. To date, most of the “smart” farming devices that exist are only accessible to big chemical and food corporations. They are siloed technologies in that the data they collect stays in very specific buckets, not to be shared with humankind, ever. These technologies are prohibitively expensive and complicated to use.

There is a reason why analysts label companies like Monsanto, an agriculture behemoth with revenues of $15 billion a year that was acquired by Bayer this year, the “best internet of things” stock investment. Historically, these corporations have held the power of IoT-assisted farming almost solely in their hands, leaving the world’s small-scale farmers to toil away with the same technology they have used for centuries. Megacorps like Monsanto and Syngenta like the deal because this is where so much revenue comes from: the toil and struggles of the small-hold farmer who must use augmented seeds and pesticides to match those seeds. If they don’t “buy in,” there will be no crop.

Individual solutions are popping up everywhere, from smart drip irrigation to optimal fertilizer use, yet they are continually being developed in silos instead of taking into account all potential interactions. Ninety-nine percent of these companies are built to be sold to tech giants. The founders of these companies see an opportunity to greenwash “environmental advancements” for lucrative commercial opportunities. They don’t care about, nor do they see, the big picture.

At Flux Protocol, a team of passionate dreamers and dedicated doers believe that this state of affairs is finally set to change. By developing MICO, a low-cost, open-hardware platform that connects to any quality analog or digital sensor paired with a data encapsulation standard and an incentivization layer for distributed storage and intelligence, the Flux solution will extend the benefits of smart farming to everyone and unlock a future of abundance for all.

The Problem With IoT Farming

As far as IoT farming goes, we have the technology. What we don’t have is a good way to place it in the hands of the people who need it most.

That’s primarily because the lion’s share of smart device development for the agriculture industry is controlled by large corporations. Their goal — understandably enough to them (not to us) — is to leverage IoT devices to improve yields for their own crops, and those of their partners, including big banks and despots. As a result, smallholder or subsistence farmers are left out of the equation.

Small-hold farmers, the very farmers we are rooting for here at Flux, have yet to realize a direct benefit from the IoT revolution as a whole. Existing IoT and blockchain implementations have mostly been centered around supply chain solutions collecting information only after their products have been harvested and left the farm.

Small individual farmers have benefited relatively little from these supply chain solutions. It’s fairly intuitive to use technology to monitor the inventory of a harvested bushel of fruit. It’s much harder, and more expensive, to acquire and maintain IoT sensors that will continuously collect data from their natural systems, like soil temperature, humidity, carbon sequestration, water retention, etc. With Flux, however, these marginalized farmers are able to comprehensively track the process from seed to harvest, or from calf to bull. Not only do these insights help increase harvest yields and reduce input expenditures, Flux-enabled sensors also aid in verifying organic or grass-fed status, earning the farmer significantly more revenue.

MICO and the Democratization of IoT Farming

MICO-based solutions, which are being developed by the Flux team, promise to change this.

You can think of MICO as the Raspberry Pi or military-grade Arduinos of IoT farming. They are small, flexible and extensible electronic boards that serve a variety of purposes and use cases. With 16 inputs and outputs (IOs) that connect any off-the-shelf analog or digital sensor combined with mesh networking capabilities, MICO-based solutions provide any grower with an opportunity to collect natural data points regardless of their location or the size of their growing operation. 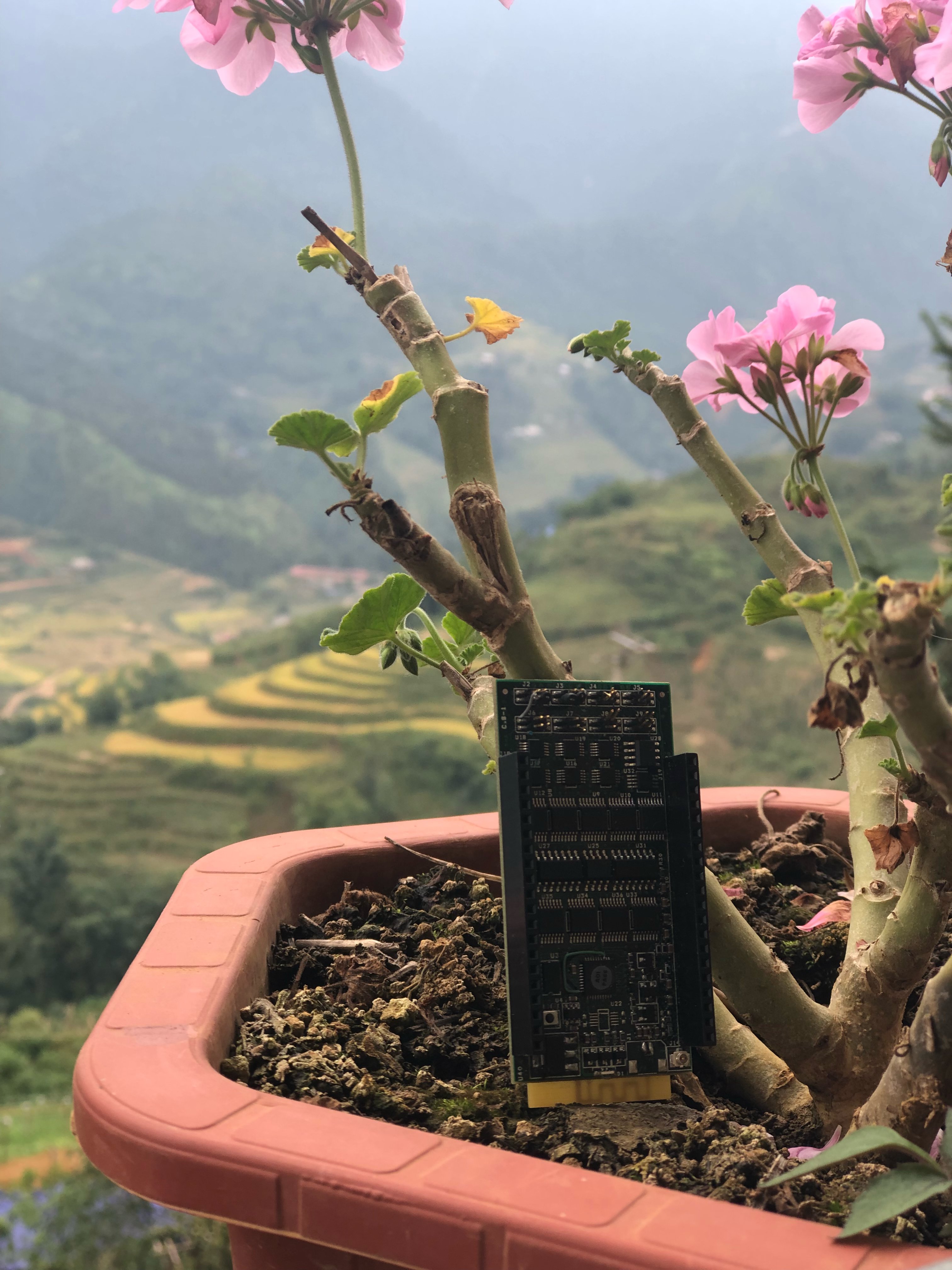 By deploying MICO-based devices, farmers can start collecting the exact data points needed to improve their future harvest(s). This could be rainfall levels for a farmer struggling to keep crops irrigated or air temperature for a home grower concerned with optimizing growing conditions in an artificial environment. It could be water salinity levels for an aquafarming site or benchmarking fields for growers trying to determine which part of their land is suitable for the upcoming season.

With a base price of around $25, MICO circuit boards will be affordable for anyone, not just big agricultural companies. As the project evolves, Flux will be creating a number of MICO-based solutions directly aimed at empowering farmers with a variety of different needs.

The power of MICO-based devices goes further than just providing an affordable way to collect natural data. These solutions are just one component of a larger framework that empowers developers to create custom applications that transform natural data into AI-derived insights and value.

Part of that framework is a new data standard that Flux is developing, and which the newly hatched TARA Alliance will be evangelizing to any individual or entity collecting environmental data. By making it easy to share data, the protocol will help farmers build solutions that can help their peers maximize the collective value of the data being captured. On top of its open data standard, the TARA Alliance will promulgate its standard and solutions addressing a wide range of issues that NGOs, governments and academia are seeking to impact.

With this in mind, Flux incentivizes farmers to collect data and build new MICO-based solutions via a native token, FLUX. When collected data is used to produce insights on the platform, the creators of that data will be rewarded in FLUX tokens on a pro-rata basis. Additionally, developers are encouraged to build new applications and solutions on the open market, thanks to bounties hosted on the protocol.

What about farmers or developers who lack the capital to develop novel IoT-assisted farming solutions? Flux has an answer for these people, too. Flux’s Proof of Impact program provides funding to help them get off the ground and further accelerate ecosystem network effects.

In all of these ways, Flux is striving to unlock a future of abundance for everyone. By combining modern IoT farming technology with an incentive to collect data, Flux is positioning our global society to make good on its vision of improving the work of farmers everywhere.