Volatility metrics suggest Bitcoin price may revisit $10,000 before restarting the rally to a new 2020 high.

A recent report by cryptocurrency research firm, Zubr, found that despite being extremely volatile when compared to traditional asset classes, Bitcoin (BTC) maintains a â€œmarket equilibriumâ€� nature for the majority of the time.Â

The report just a few days after Bitcoin rallied beyond the $12,000 mark and its volatility finally recovered from a multi-year low.

Using data from CoinAPI, a cryptocurrency market data provider, Zubr found that Bitcoin price swings are typically accompanied by nearly symmetrical movements on the opposite side, creating opportunities both on the positive and negative side.Â

â€œThe majority of the time, Bitcoin will almost mimic the exact percentage increase with a percentage decrease on the very same day.â€œ 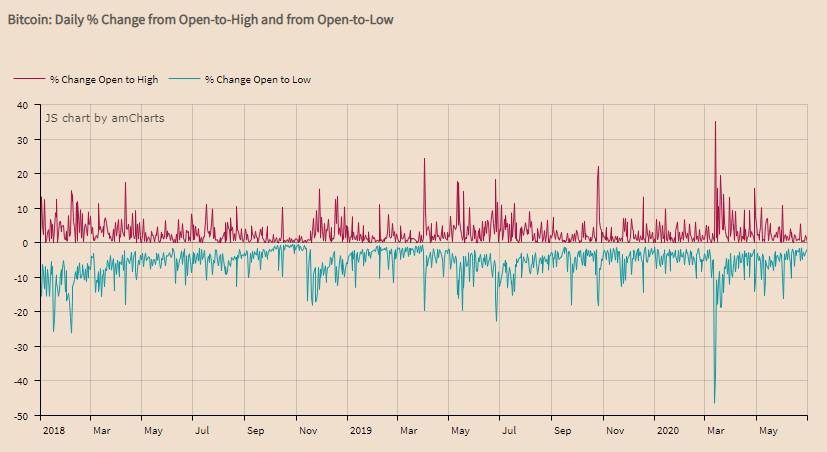 Typically, this mirror effect takes place within the same trading day, but Zubr also found that it can also occur over the course of longer time periods.Â

This means that over the short term, Bitcoinâ€™s recent rally to $12,000 could see a similar return to the $10,000 levels and a number ofÂ  other factors pointing to the possibility of this pullback.Â

Whatâ€™s in it for traders?

Developing better awareness of market equilibrium and its relation to Bitcoin price can be extremely insightful when incorporated into a day-trading strategy, especially considering that the volatility phenomenon discussed earlier has been constant since 2017.Â

Traders can ride the volatility and gain from both shorting and longing Bitcoin on a daily basis. However, this is only one of the many things traders should have in mind.Â

â€œWhat the data is effectively indicating is lower risk opportunities are possible if one is to trust the historical events and deem such swing intrinsic to Bitcoinâ€™s trading character. For example, should Bitcoin increase by 10% and retreat back to its opening price, history indicates that there is an overwhelming chance (over 50%) that the price drops between 9-12% within the same day or following day.â€œ

While inconclusive on its own, this data point can be used when composing a strategy for intraday and momentum trading styles.Â

In the meantime, only time will tell if Bitcoin will maintain its current market equilibrium or continue higher above the $12K mark.