JP Morgan’s share price is now around $110, down 2.7 percent by market’s close yesterday, according to data from Bloomberg Markets. 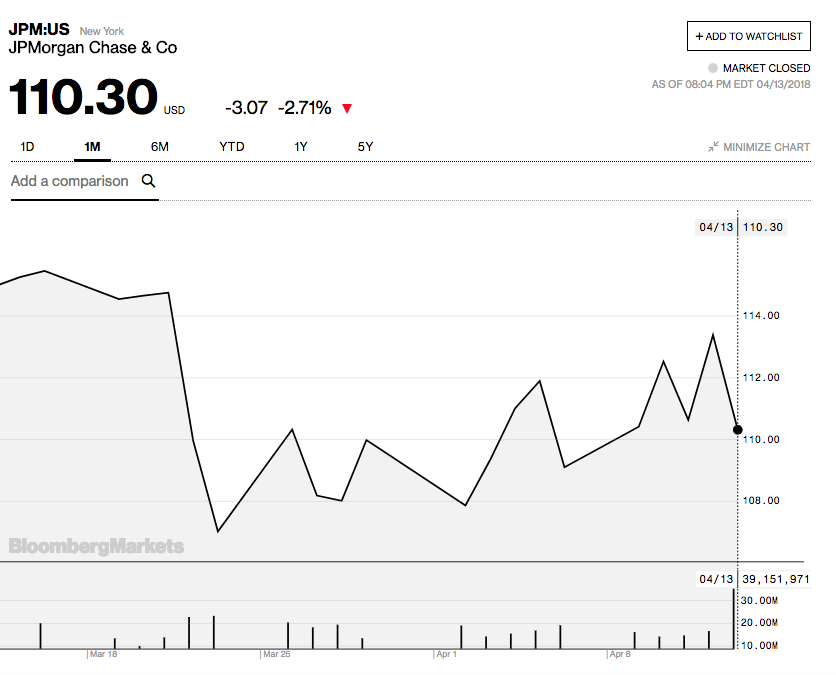 Citigroup’s share price is now around $71, down a little more than 1.5 percent. Wells Fargo also experienced a first quarter increase in profits of 5 percent to $5.9 billion, adding the caveat that the numbers could be recalculated after a potential $1 bln regulatory settlement, WSJ notes. Wells Fargo share price was around $50 by market’s close yesterday, down more than 3 percent. In another article, the WSJ mentions that a possible reason for the share prices of these Wall Street banks falling could be due to the past week’s mini-rally that led to investors taking profits. The recent tax reform could bring benefits to the banks that could help their share price, but not while it is still in its early stages, JP Morgan CFO Marianne Lake told the WSJ.

The traditional markets had started off the second quarter relatively low, as the crypto markets ended their worst first quarter ever for Bitcoin (BTC) and Ethereum (ETH). At second quarter’s start on April 2, the founder of investment management firm DoubleLine Capital had said that BTC had become the “new” stock market indicator as the “lead horse” of risk assets.

The crypto markets have since seen relatively strong second quarter growth, with Bitcoin’s price jumping by more than $1,000 in the span of 30 minutes on April 12. The crypto markets continued to see growth across the board on Friday as well, with BTC solidly over $8,000 and ETH surpassing $500.