Bitcoin price remains range-bound as the upcoming halving is being overshadowed by the coronavirus pandemic and global economic fallout.

The cryptocurrency and equity markets have seen a relatively stable week, as the volatility and volume drained away from both markets. Bitcoin (BTC) has been moving between $6,600 and $7,300 and hasn’t been showing direction. On the other hand, the volume is starting to drop significantly in the markets.

Such a stable movement and compression combined with low volume generally leads to a big move to occur with just 24 days until the Bitcoin halving.

Bitcoin flirting with the 100-Week MA to break 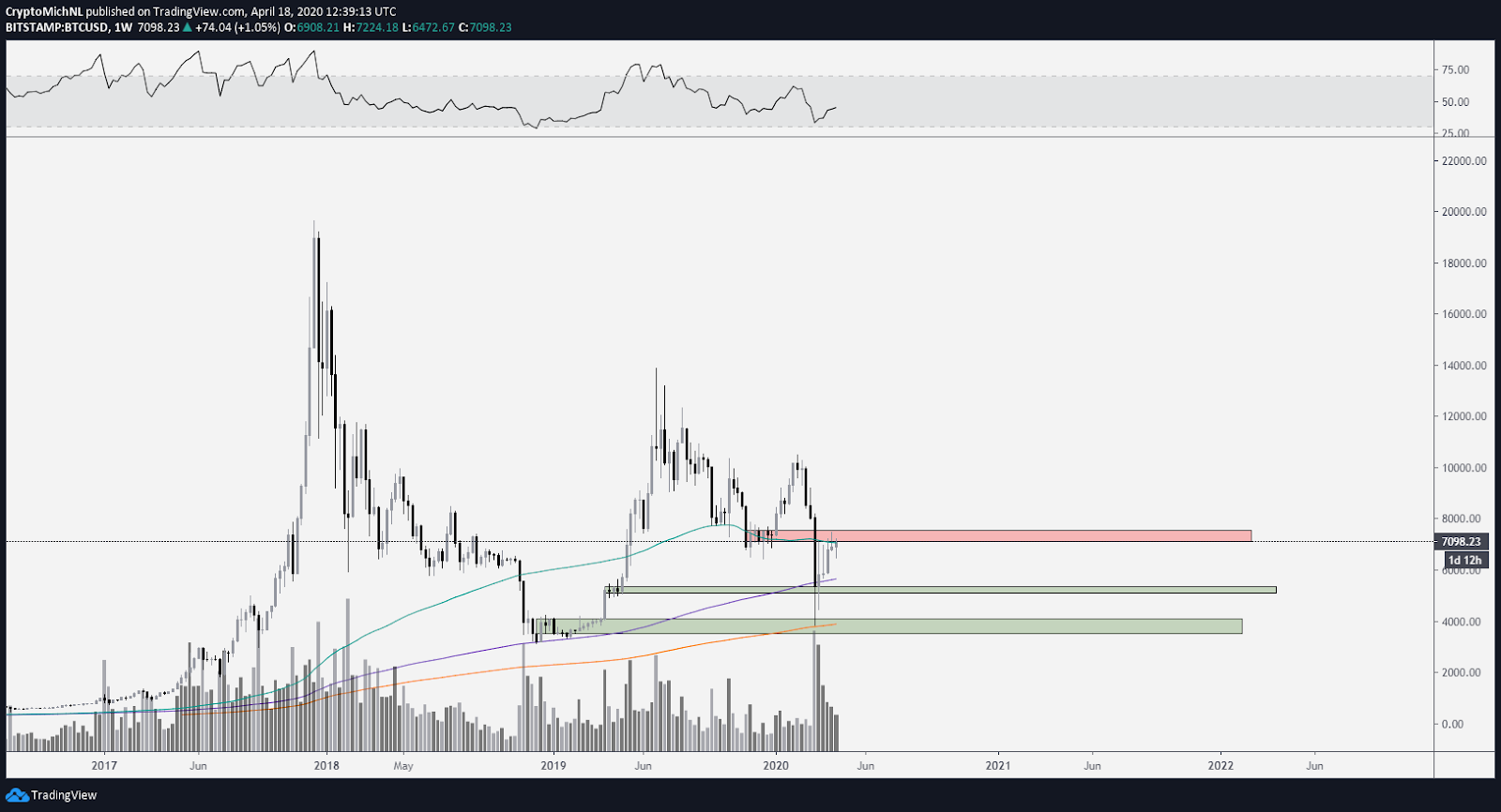 The weekly chart of Bitcoin is showing five consecutive green candles in the past weeks. That’s showing strength as the majority of the losses on March 12 or “Black Thursday” have been pared in the recent movements.

But is this sustainable? The chart is also showing something different. First of all, a crucial break and further upwards extension require a clear break through the 100-Week MA. The crash on Black Thursday caused the price of Bitcoin to drop below the 100-Week MA for the first time since the end of 2018.

Next to that, the previous support of the price was found between $6,900 and $7,300, which is currently being tested as resistance. Combined with the 100-Week MA, an apparent breakthrough would indicate further upwards perspectives, potentially leading towards $10,000.

Finally, the recent run-up is losing momentum as the volume is dropping and showing exhaustion. That’s not a strong signal as one would preferably want to see an increase in strength resulting in a massive breakout. An example of such a breakout is what happened in April 2019, which was a push from $4,000 to $5,300. 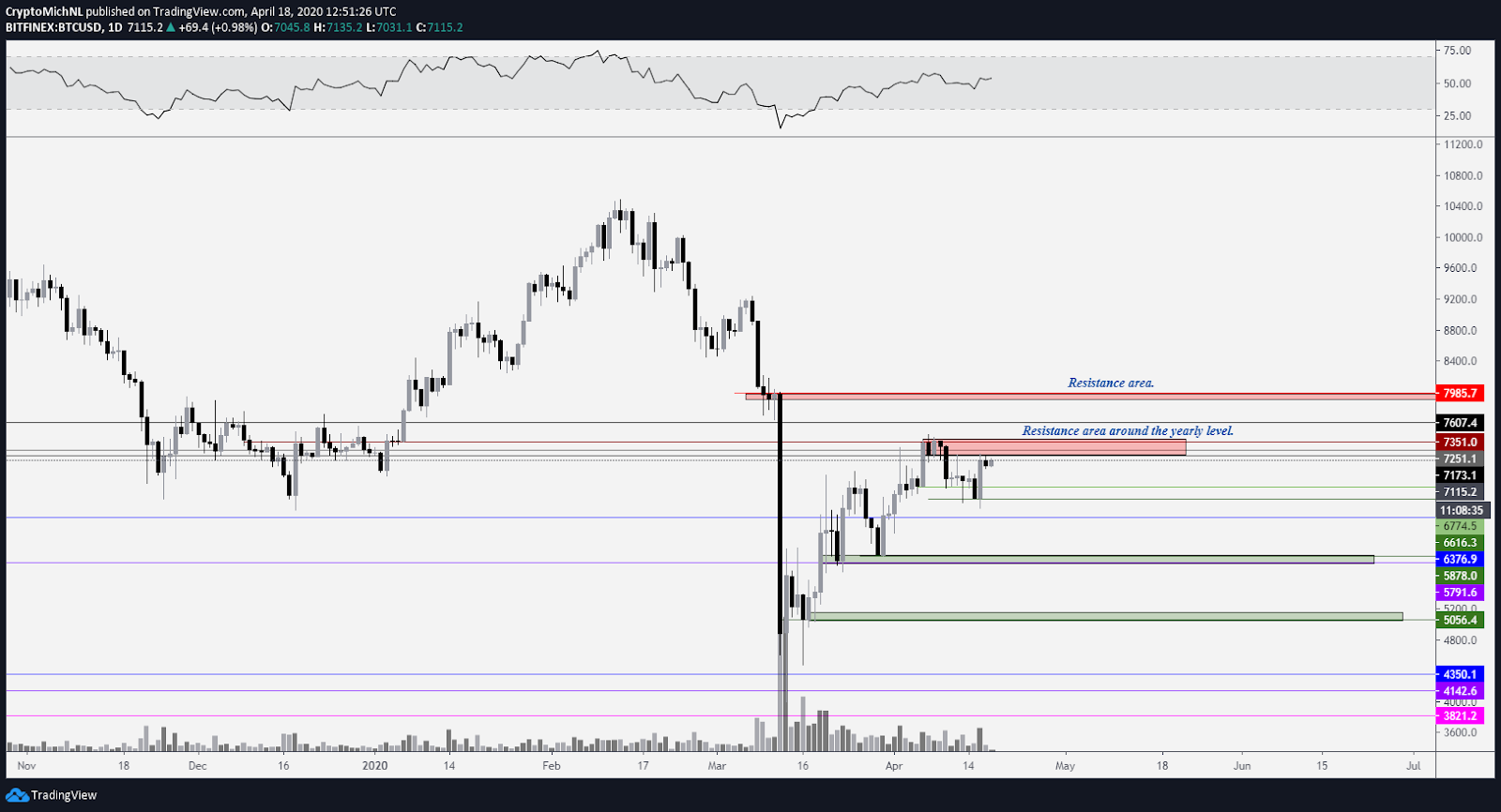 An apparent breakthrough in this resistance area can put the price of Bitcoin back on track towards $7,800-8,000, as that would be the next zone to break.

Worth keeping in mind is the halving in three weeks from now. Usually, these events trigger a “buy the rumor, sell the news” effect resulting in a run-up of the price prior to the event. Investors then see that the actual event is done and doesn’t have much impact in the short term, which triggers the price to drop and results in the “sell the news” effect.

Going back in history, the Bitcoin halving of 2016 triggered a similar move as well as the price action in Litecoin.

However, people should take note of the difference in market sentiment. In 2016, there was no global pandemic and economic crisis. 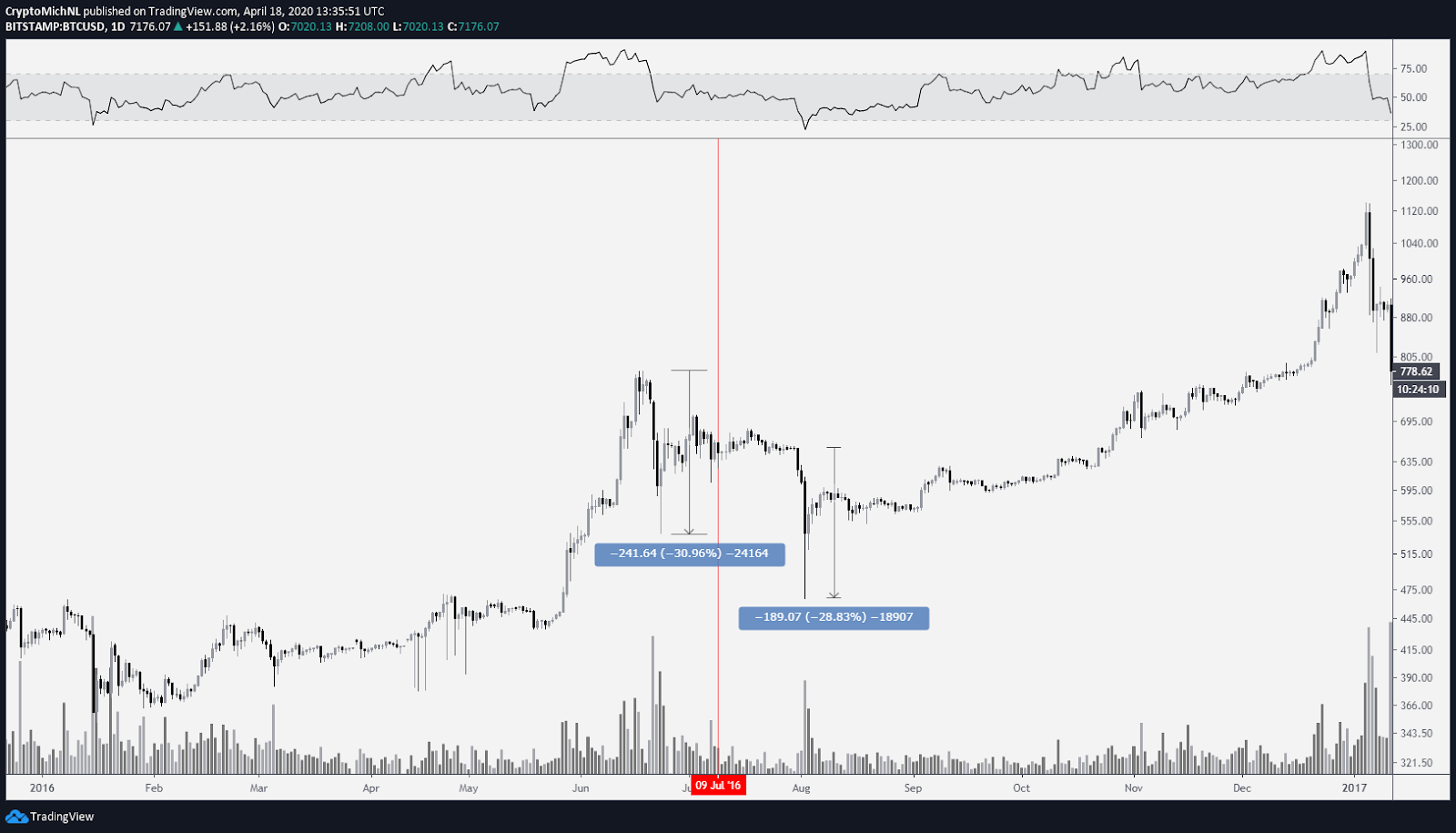 The total market capitalization is showing a similar structure as Bitcoin. However, the levels are more clearly defined than on the BTC/USD chart itself. 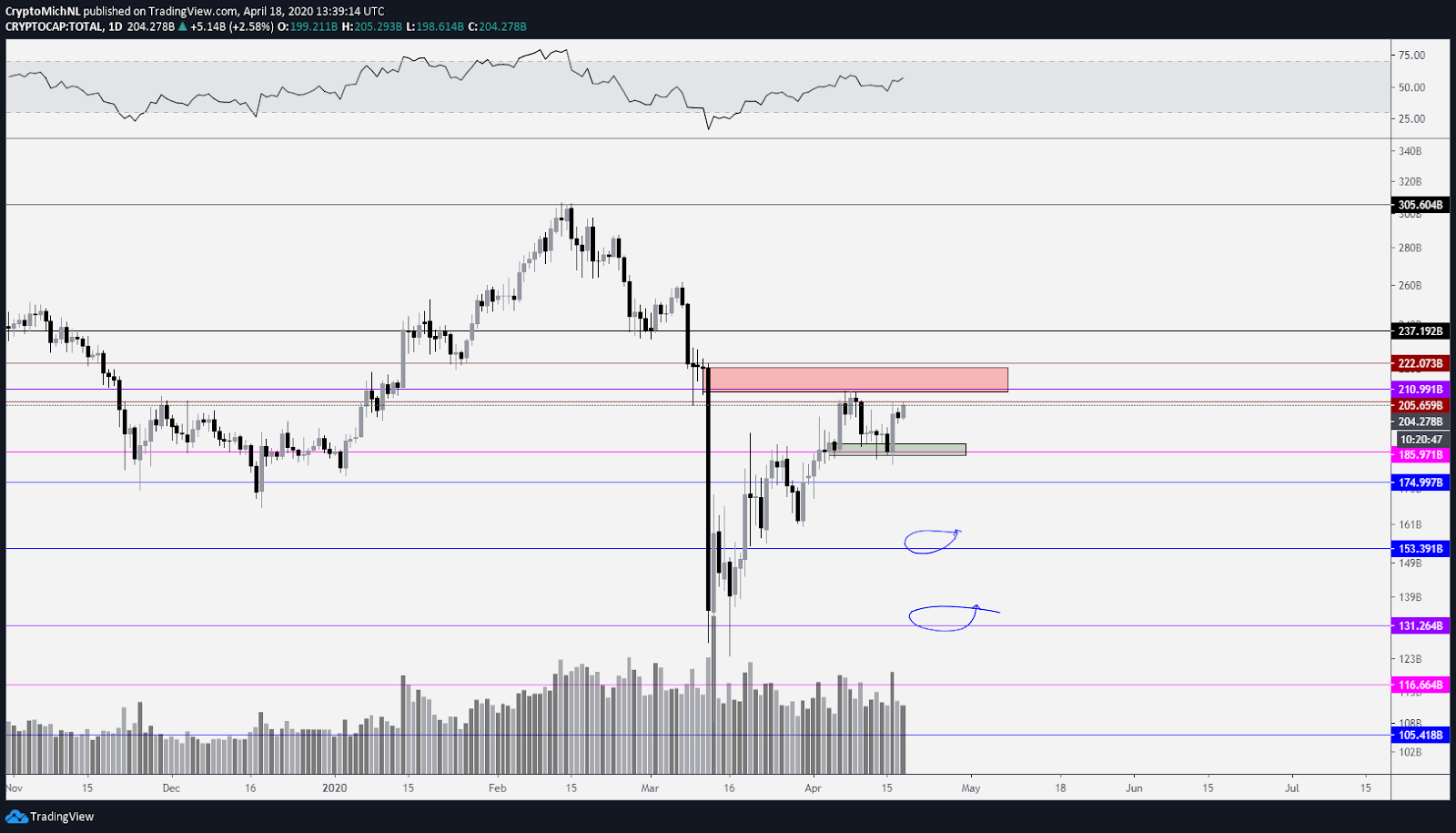 The $185 billion is an essential level as it can show bull/bear momentum on the capitalization. A breakthrough below $185 billion would initiate a trend shift and short term bearish bias as the market would then be making lower highs and lower lows.

The market capitalization would also have lost a critical support level as $185 billion is an important level.

This move down didn’t occur, which means the total market capitalization is likely going to retest the highs. An apparent breakthrough and flip of the $210 billion levels would indicate strength and further upwards potential.

If the $210 billion levels are broken and flipped for support, further upwards momentum can be warranted towards $240 billion. 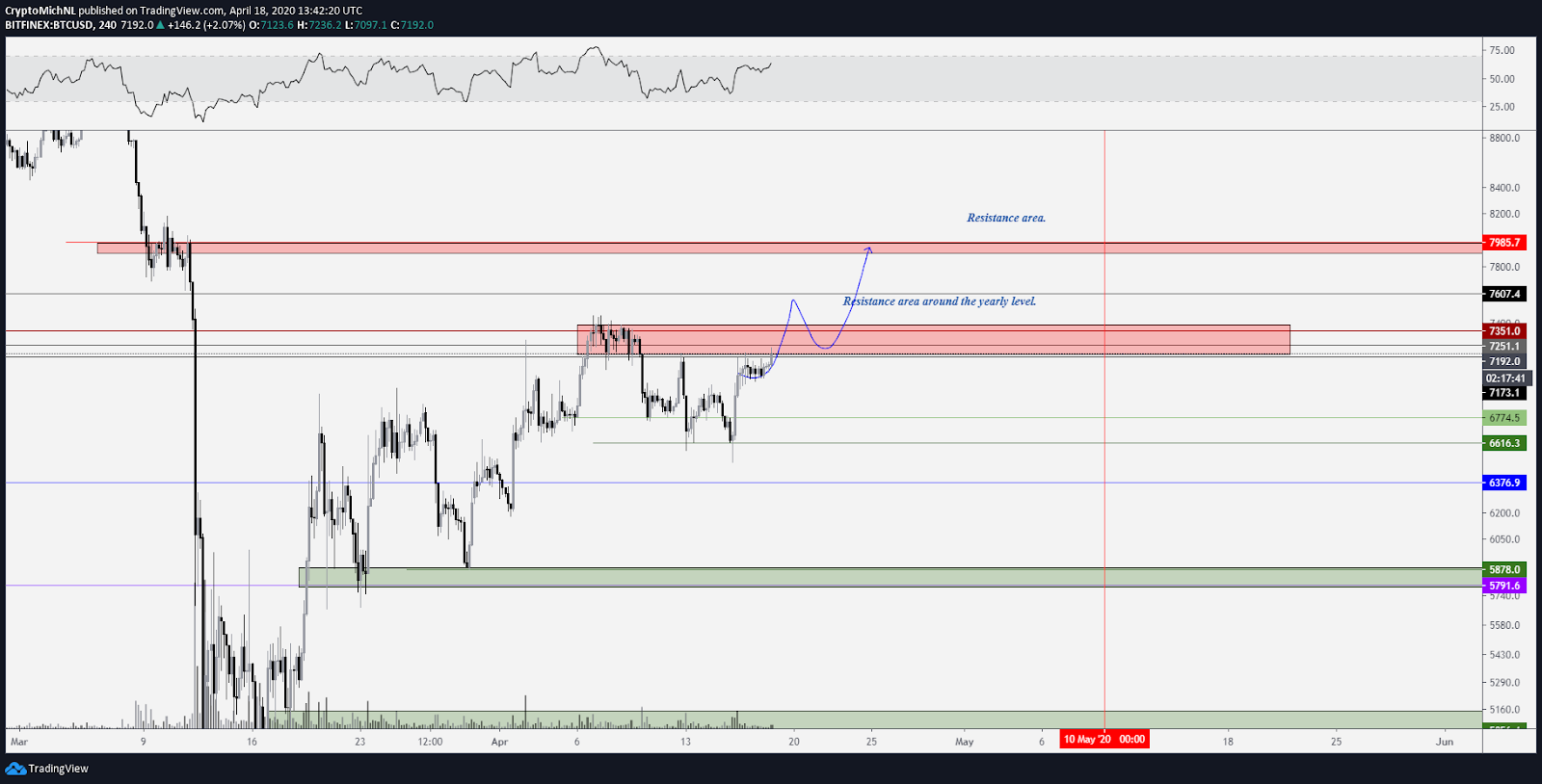 The bullish scenario is pretty straightforward for the price of Bitcoin. An apparent breakthrough in the $7,200-7,300 area would be a strong signal for the markets.

Such a breakthrough would warrant a further upwards movement and, as discussed previously, suggests $7,800-8,000 as the next possible target.

Hence, the price of Bitcoin is currently facing resistance, which can also be seen on the 4-hour chart. Thus, a breakout, and preferably a daily candle close above the $7,200 level, would likely provide further upwards momentum.

Traders should also take into account that movements during the weekends are usually a lower volume and often “traps.” These are movements in one direction to take liquidity (which is lower during the weekend), which immediately reverse the other way around.

As a rule, it is recommended to be patient and wait for a higher time frame candle closes above the aforementioned levels. 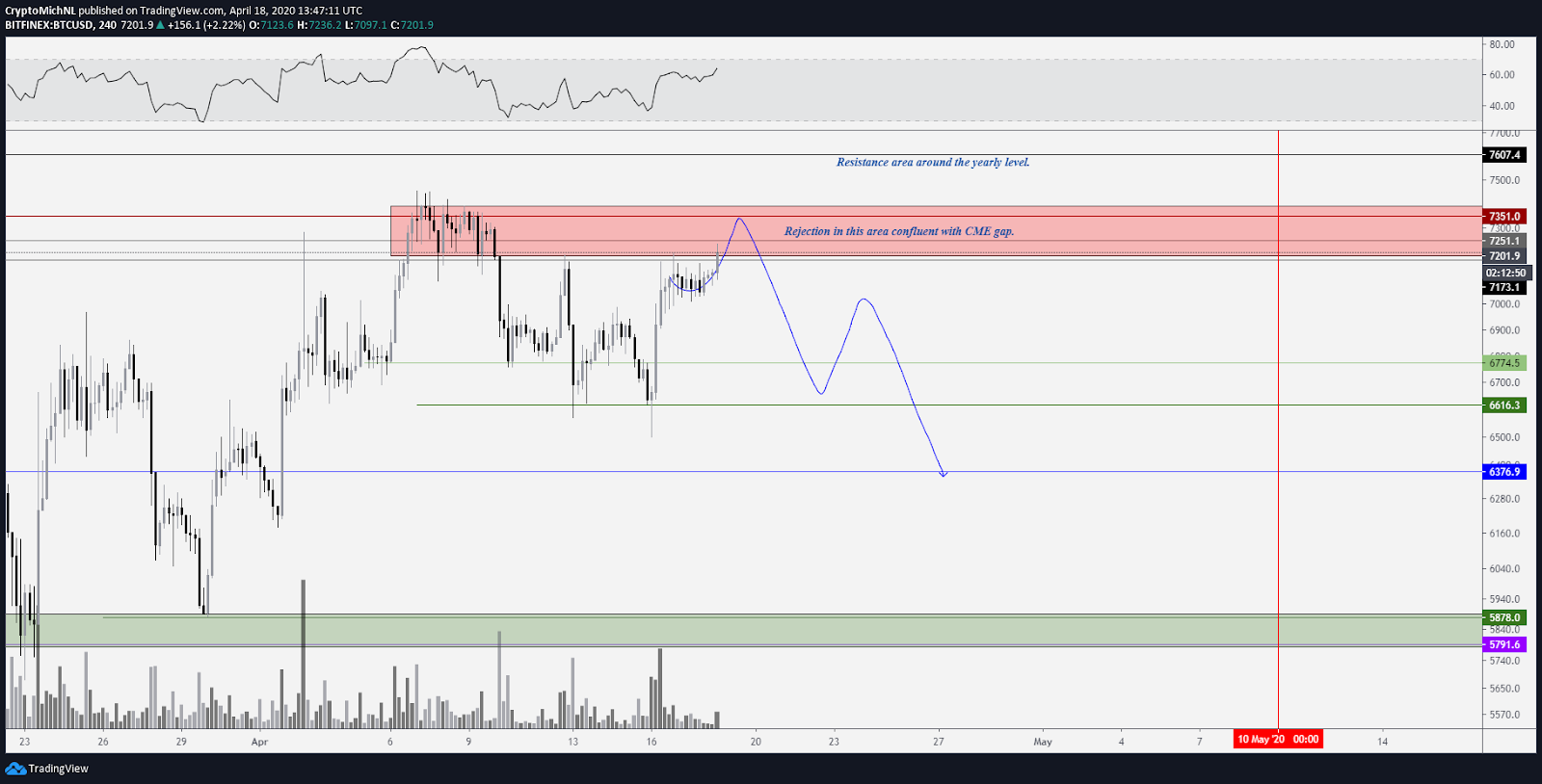 The bearish scenario is shown in the chart above. In this case, the resistance zone will be tested and rejected in the coming few days.

This is confluent with the CME gap found at $7,280, which is still not closed. If the CME futures open on Sunday evening, this gap can be closed.

If the price of Bitcoin rejects in this zone, a harsh selloff could occur in which lower highs and lower lows are usually the next steps to follow.

If Bitcoin drops towards $6,600-6,800 and makes a lower high at $6,900, another support/resistance flip occurs in which the trend is confirmed as bearish with more downside expected.

ShareTweet
Comments Off on Weekend Trap? Bitcoin Price Hits $7.3K in Attempt to Finally Break Out