If Bitcoin sees similar FOMO rallies like KODK in recent days, BTC price could quickly soar to six figures, as some analysts have previously predicted.

Retail traders on Robinhood have been increasingly seeing â€œfear of missing outâ€� or FOMO rallies around certain stocks. The latest beneficiary has been the stock price of the renowned camera manufacturer Kodak (KODK) whose stock surged from $2 to $60 in one day.Â

Therefore, given the current climate of economic uncertainty and â€œinfinite QE,â€� if the optimism around risk-assets flows over to Bitcoin, chances of a similar rally for BTC price â€” as some analysts are currently predicting â€” certainly increase.

Moreover, following the Federal Reserveâ€™s FOMC meeting on July 29, strategists expect the overall sentiment of investors to recover, which is good news for Bitcoin bulls given the recent correlation between Bitcoin and stocks. 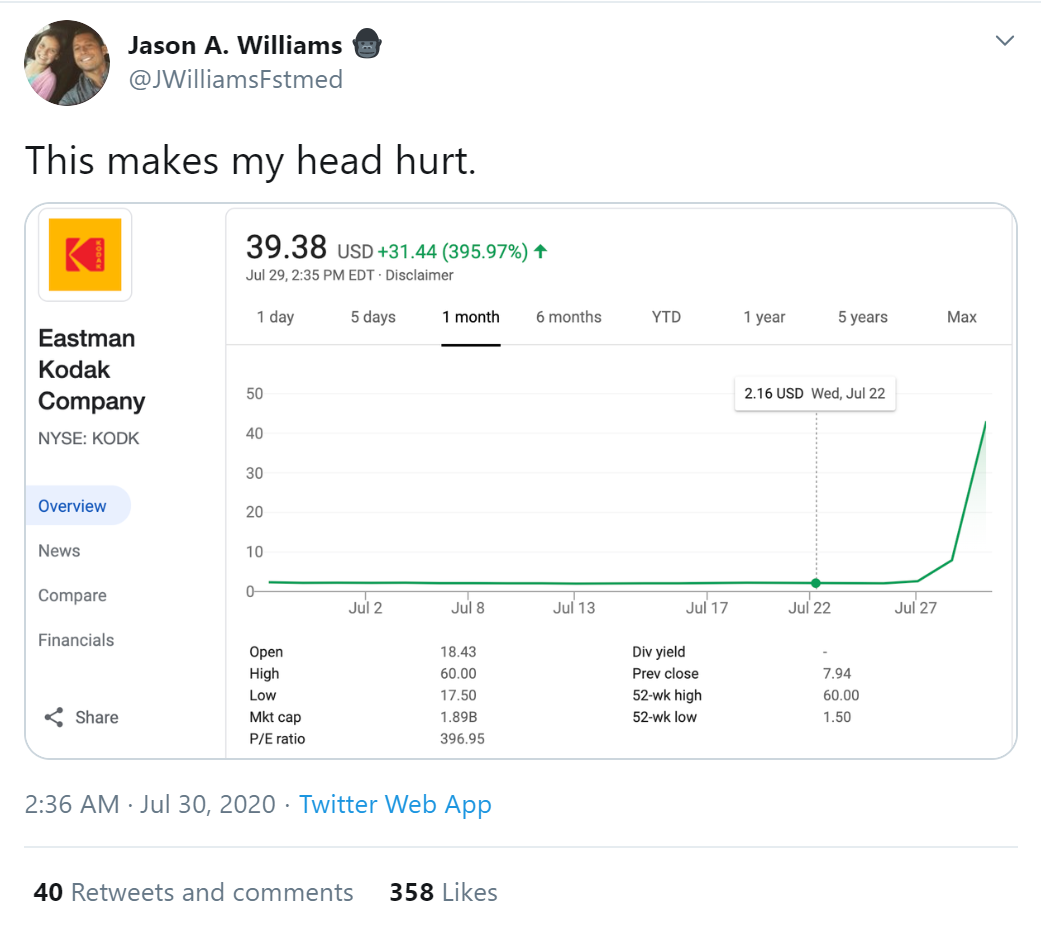 On July 28, U.S. President Donald Trump said Kodak would receive a $765 million loan to create Kodak Pharmaceuticals. Kodak has been producing materials and chemical products for quite some time.Â

Kodak shifted away from the camera industry in 2013, and President Trumpâ€™s message further solidified Kodakâ€™s presence in pharmaceutics. It came after the government decided to decrease the dependence of the U.S. on drug manufacturers in overseas markets.

Consequently, Kodak saw a rally that even outperformed the 2017 parabolic uptrend of Bitcoin. In a single trading session, the Eastman Kodak Company stock rose by 318%. It broke through 20 circuit breakers, securing a $1.45 billion market capitalization. At its peak, Kodak surged by 2,198% in 2 days.

Considering the sudden surge of KODK price from $2 to $60, a similar rally would translate into BTC prices over well over six figures, vindicating quite a few $100K price predictions for 2020 from some notable industry experts.Â

KODK price and Bitcoin also saw some correlation in early 2018 along with other cryptocurrencies. As Bitcoin rallied to all-time highs of nearly $20,000, KODK surged from $3 to over $13 during the same period.Â

Meanwhile, Robintrack.net reports that more than 100,000 Robinhood users now hold the Kodak stock. Before the announcement, less than 10,000 users were invested in KODK.

Kodak and Bitcoin have no glaring similarities. But the overnight rally of the stock and the sudden inflow of capital from retail investors show how fast the trend could change.

It also demonstrates the effect favorable market conditions are having on stocks and alternative assets. The Fed emphasized in the formal FOMC statement that it will do anything that it takes to revive economic growth.

Market FOMO comes at a good time for BTC

The price of Bitcoin has increased from $3,600 to over $11,400 within five months. The rally comes after a block reward halving on May 11, which occurs every four years.

As Cointelegraph reported on Wednesday, high-profile investors are expressing enthusiasm towards the ongoing Bitcoin uptrend. Cameron Winklevoss, the billionaire founder of cryptocurrency exchange Gemini, said the next Bitcoin bull run would be â€œdramatically different.â€�

Among the three reasons Winklevoss laid out, he pinpointed the involvement of substantially bigger capital in the crypto market. The market cap of Tether and the AUM of Grayscale show significantly more capital is sitting in crypto than in previous years. For that reason, investors believe that when an uptrend kickstarts, it could trigger a FOMO rally among retail investors.

Based on various metrics, Jason Williams, the co-founder of Morgan Creek Digital, said he foresees Bitcoin achieving a new all-time high within 2020.